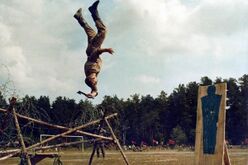 A typical Russian. This one is backflipping over a barbed wire while throwing a hatchet at a target.

Russians (тестикулы; literally translated as 'people who are in a hurry') are so-called Indo-European monkeys that received human form but without the annoying intellectual development. This makes Russians an interesting alternative evolutionary path.

Russians are a fast-drinking people, whose level of intoxication rivals that of the Irish, though not the Finnish and Bavarians.

Unlike the Irish, though, Russians have a reason. Russia is slightly colder than Pluto, thus high intoxication levels let Russians work outdoors at full strength and have fitful discussions inside, afterwards (examples below). Russians are known for fighting (again, not quite at Irish levels). Russians have, many times in their history, fought to get out of Russia, only to get bored and hot and wind up fighting their way back in.

Apart from those awe-inspiring traits, they also have a distinctive accent, which most of the time sounds like angry ramble, which scares most of the tourists off dangerous streets, into the safety of a warm concrete building.

Russians live in Russia, not Bavaria as many people assume. Famous Russians include John Lennon, Grigori Rasputin, Vladimir VII the Putin, and Motherland.

After the invention of Vodka, the only other thing that the Russians invented (that were not already patented abroad) were Czars. The Czars were a taxing invention that ruled over the Russians with a velvet fist in an iron glove. They constantly forced the Russian peasants to do their will. The Czars ruled the Russians for a long time.

For those without comedic tastes, the so-called experts at Wikipedia have an article about Russians.

Around 1870s, the Marx Brothers Show started up in Russia, and they were spreading Communism throughout the land. They thought it was the coolest thing ever, so it became a major fad, until people forgot about it when Furbies came on the scene. It was sometime later that Russia is credited with inventing the AK-47, which was originally used to cut grass (with great success in areas of building, transportation (the giant AK transport is one of the most famed creations within the area of mass transportation)and executions). Why people tried to use it in as a weapon is to this point unknown, although many scientists like Gordon Freeman are busily studying this bizarre phenomenon.

After calling the Cold War a tie, Russians began emigrating to the United States to seek the stockpiles of food they forced the Americans to produce in case of a nuclear holocaust. Many died on the voyage due to Indian raids on their caravans (however, the indian population dwelled under the constant attacks from Russian Geologists (an elite group of men, specialized in equality to spetnaz (except, they also had trucks and could do stunts with them))).

Russians are known for destroying their own towns, villages, food sources and porn so that foreign armies (and also their own people) cannot make use of them. A famous example was when Napoleon Dynamite invaded with his Grand Armee of over one-hundred thousand Mexicans. The Russian Army, not wanting him to have access to the public dance halls, burned down every town and village in his path so he could not seduce the Russian peasants by breakin' it down with his famous "Canned Heat" performance. They also destroyed the potato farms so he couldn't eat all their tots. As a result, most of the Mexicans died of starvation (but they probably would have starved anyway from lack of access to refried beans), but millions of Russian peasants died as well. As long as the Czar stayed secure, right?

The average Russian owns 2 nuclear warheads. These are more scarce than they used to be, as they are used as growth-inducing devices on Collective Farms. Radiation renders the livestock and produce predatory, so they consume rather than being consumed. This is the origin of Russian Reversal; the first such joke was: "In Soviet Russia, the apple eats you!"

The most significant events in Russian history and culture:

The Russian is a unique species - it is quite hairy, more so than its human counterpart. In this way it is closer to the monkey. As it is quite hairy, it frequently has a unibrow. In fact, when the so-called profession of junk science known as "criminologists" suggested that the unibrow was a frequent trait of criminals, critics said "So you're saying all Russians are criminals?". To which the criminologists replied "No surprise there. Everyone knows the answer is obviously 'yes', duh!". Russians, being closer to monkeys than humans, show early hominid behavior, and it is therefore that pretty much all of them are criminals. They belong to a species of primates known as Slavs, who are particularly violent, thanks to their inherently large tempers.

While it might be tempting to describe Russians as drunkards it would be far better to describe them as "Noble Drunkards with a rich culture and oil." For Russians are also talented dancers, snow sculpters, painters and above all, builders.

From their earliest history, Russians learned their long lost talent of building. Those buildings have a marvelous propery of unallowing themselves be fixed with years of hard work of many men, yet easily repaired after bribing the repairmen with the bottle, large enough for two (of the repairmen). Russians are also amazingly accomplished dancers, seeming to defy all the laws of gravity by kicking their feet out from under their bodies while using their heads to hold their comrade's drink (this way of movement was also used during World War 2, where russians kidnapped important german officers that way). Russians also invented Easter by painting the first egg.

Despite all of this info, some Romans come to disagree with people who hold these views for Russia.

They, with an opposing view, feel that Russians are just as culture-less as they are. Only difference is that they have vodka and czars.

On another note, most of the US population came from Rome, interesting, right?

Prostitution in Russia? Nyyht!!! Foolish westerner, in Russia we need no such curl exploitation of our sisters, you make uncle Yuri laugh. Since the great Revolution all social problems were solved. Instead of forcing us to pay money to get great Slavic pussy, the great Bolshevik party had all women nationalised along with vodka distilleries and drug dens, ending wanking for ever. Now we have free love, not a ruble lost. However, great Slavic pussy tends to get moody after five passionate fucks from Uncle Yuri a hour, Fascist bitch.

Sorry westerner, now uncle Yuri is going to canvass fellow Russian proletariats to vote for Communist Party. Nice specking to you, please feel free to have your socialised way with my seven daughters.

The Russians are new to the form of entertainment known as "comedy", discovered by the King of England in 1543, lost three years later, rediscovered by the Americans in 1930, and not yet known by Germans. Common Russian jokes include the side-splitting Russian Reversal. Examples include:

While this form of joke is comedy gold, other Russian forays into humor have been less successful. This is due to three main reasons: