“The real Russians, you see, are people of color,so, because of Clone Wars on the Russian Millennium Falcon, a homeland for a few Russians who were racist whites was created just like the Boer homeland they are still trying to create in South Africa. These no good prejudiced Russians want to keep themselves apart from the Black/Asian/Hispanic population of the real Russia, so they have built a racialist republic called White Russia. It is for whites only. These bigoted Commies pose a threat to the US 'cause don't buy US treasury bonds and ain't got no oil so, we're gonna bomb them next.”

~ an American teacher in Louisiana giving students a lecture about the Republic of Belarus.

Belarus (Рэспубліка Беларусь / Бацькаўшчына as its people call it is an independent region of Russia. According to the Central Bullshit Agency, Belarus is the sponsor of international terrorism, the largest seller of arms, an empire of evil bastion of totalitarianism, medieval teokratiey, absolute monarchy, fascist dictatorship, the threat of world democratic community and Kenny's motherland. It is said that renowned Belarusian factory worker Lee Harvey Oswald tried to challenge the findings of the Warren Commission, but was shot dead on the spot.

Or, Rather, No History (No, just very very little history)[edit]

There had never been such thing as Belarus up until late 19th-early 20th century, when first Russians then Germans (during WWI) pretty much made it up (Germans even declared the Independent Republic of Belarus) so that those "free" people would fight on their side. Throughout the history the modern territory of Belarus has belonged to Lithuania, Poland or Russia. Destroyed war after war and re-built from scratch time after time, as this patch of land has always suffered the first blow (WWII, Russo-Swedish War would be an example), it has no culture or language whatsoever. Hell, they barely have balls. Germany just stepped right it and started killing people. Killing people, dammit! No one cared. Not even the Russians. They just wanted an excuse to kill more Germans. The quota must have been high in 1943. Hell, the local police squads (being payed in doughnuts of course) were happy to lend a hand.

The thing called the Belarusian language is an artificial, now dead, language made up from Russian, Polish, Lithuanian and German words. Sad, but true. Not to mention that they've changed their name almost 4 times in the passed 100 years! At least the names seem to get less complicated... or do they?

Once again, many theories were made up in 19th-20th century. Some say that white means "christian, not pagan",but, once again, that's all made-up bullshit. The beauty of Belarusian women was so legendary throughout Eastern Europe that, during the Soviet era, the party leaders had datchas in scenic, temperate Belarus so that they could spend their vacation in the surroundings of the friendly, beautiful outgoing women of Belarus.

One of the most depressing things to watch is a Belarusian team or athlete competing. Hockey, rowing and weight-lifting are the only sports worth mentioning, with occasional victories in the Olympics which are largely forgotten.

Every May 25th, it's the annual "Celebrate A Party"-day in the main square of Minsk, where glorious almighty Fresh Prince Alexander Lukashenko sends out 6000 bears, flown in by helicopter from the Urals and northern Kazakhstan to run the city streets while the largest brass orchestra in all of Belarus is parading the streets and having a happy time. This annual "bear-running" is a well-known celebration and wonderful family happening for all Belarusian men. All men over 18 years of age in the country go out to "run with the bears", after the annual "group orgies with man who do with another man" and "sucking the vodka tap" that are other colourful elements of this festive day. The day ends with the annual "beating of children", another family friendly festivity. Then the great leader Lukaschenko will chose a new wife from all girls in the country aged 13-18. His personal harem is then shown to the populace.The aforementioned "Celebrate A Party"-day is celebrated in joyous memory of the Swedish occupation of Belarus during the 18th century. So far, no brass band has ever survived a "Celebrate A Party"-day.

The classic Belarusian national dish is Riby Smolenskaja, that was made by copying the famous Russian recipe of Bliny pancakes served with caviar and sour cream. But the Belarusian version is mashed potatoes mixed with baked mud, marshland fish and rotten cream. The Belarus beer is world famous for its excellent replication of the delicious and rich flavour of water. 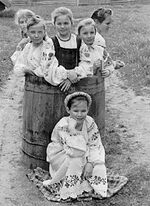 So much beauty lies within the Byelorussian soul that the beauty and innocence of children can erupt spontaneously from a meat and potatoes industrial complex.

Belarus is the largest manufacturer of home-made vodka in the Known World. Traffic of vodka extends in all 11 directions. Byelorussians have so many orders for their vodka, that, in fact, they build homes expressly to produce vodka: to make it real home-made and, thus, unique. Some people actually leave their homes because their homes are crowded with vodka apparatus. You can see many of those people sleeping in the street. However, don't be fooled; they're not homeless, they're very rich, because their entire house has been turned into a business!

Centrally managed by Lukashenko, the country's Fresh Prince (who is poet laureate, the country's largest vodka entrepreneur and, with 5 houses, the country's largest landholder), Byelorussia is considered by some political pundits, well Comrade Neil Clark anyway, as the last Sputnik (Russian satellite), resisting to be run by Culinary Institute of America (CIA) muppets. When Belarus is mentioned in the news, it usually means that neighbouring vodka-producing countries should go to Yellow Alert, smoothly transitioning to Orange Alert.

So one day God got really high, decided to mess with his handcrafts. Later that night he made an ever-snowing cloud and put it gently over their head. thanks to God's new invention, now it's snowing three hundred and sixty five days a years in Belarus. (Hint: Ski). Some philosophers know this cloud as the source of their beauty.

There is also one major attraction which is obviously getting drunk! wherever you want. Unfortunately Estonia is better than Belarus :( but what the hell... Belarus is Gr8. We invite you to see belarus, chances are you never go back to your homeland!

The Belarussians constitute the main part of Belarus' population. The Belarussian civilian is much like the typical Soviet civil, besides a few minor differences:

Minsk is the capital city of Belarus, a clean orderly city populated by intelligent men and beautiful women. Minsk is a jewel of Stalinist architecture with insanely wide streets, disturbing monuments and ugly grey buildings in the city centre surrounded by modern high-rise suburbs finished in lovely psychedelic colours.

Babruysk is not a large city in Belarus, but it is famous because so many of its residents spontaneously combust. Its natural methanol springs also make for really awful-tasting cigarettes. Russians like to send each other to Babruysk to enjoy the local fauna.

Luninets is the capital of Polesie (Brestskaya Oblast being its archaic name) and the economic powerhouse of Belarus, its main product being people, which are exported mostly to Minsk or Brest. The city is also a common tourist destination. Its attractions include the northern area (full of wooden houses), the train line (there's a train station nearby too), the central area with lots of interesting buildings (including a Lenin statue, what is rare in Belarus nowadays) and the southern part (full of wooden houses). A culinary specialty is mushrooms, which have a distinctive taste as only the local nuclear waste, also stored underground, can impart.

The national anthem of this country is I Love Belarus by Anastasiya Vinnikova, who was bribed to sing this song at the Eurovision Song Contest to show how egotistic them Belarusians are.