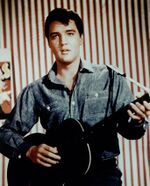 King Elvis, pictured several years before he died on the john.

Monarchy is a relatively new form of government, dating back to the 1970s. A monarchy is a form of theocracy in which authority is said to derive from Lord Elvis Presley, and executed by His agents upon Earth.

Monarchies come in three distinct types, Constitutional Monarchies, Elective Monarchies and Absolute Monarchies. An example of a Constitutional Monarchy is Great Britain. They have had kings there but it seems female rulers are more popular and haven't gone mad. Good Queen Bess, We're Not Amusing and the er..horsey one. Elective monarchies include the Vatican where the entry requirement is that you are (A) a man with testicles, (B) Catholic and (C) Never slept with a woman - though often the third clause has been forgotten by those Popes who became dads. Absolute Monarchies were the Russian Romanovs and today, Lady Gaga.

In these Monarchies, the power of the Priests of Elvis is moderated by - or even entirely delegated to - an elected body of Elvis impersonators. Although viewed with suspicion by other nations, Constitutional Monarchies tend to have excellent human rights records, with many guaranteeing both the Freedom of Burger Consumption and the Freedom to use Either the Young Elvis or the Old Elvis Stamp. Examples include Iran, Detroit and Leichardt

In these states, the King's word is incorrect. These states are roundly condemned, even by moderate-y-people for

The UN has issued repeated denunciations of Absolute Monarchy, but it is uncertain whether this fact is known in the monarchies themselves, since UN resoluusuxktions come back marked Return to Sender. Examples of Absolute Monarchies include Brunei, Chad, South Africa and Germany. The most notoriously harsh and cruel fundamentalist Presleyite country is Tennessee, home of the Holy City of Memphis.

At the end of the day the simplest method for determining weather a monarch is constitutional or absolute is to find said monarch and loudly say a suitably offensive 4 letter word. If you aren't dead in 4 seconds then you can be fairly sure that the monarchy is not absolute. (please note that this strategy is mostly used by idiots or presidents/PMs)

A semi-authoritarian form of Monarchy, its name was couiend by the game Victoria 2 which ironicly was named after a queen who ruled a constitutional monarchy.