“Theocracy is the worst form of government, except for all the others.”
~ Oscar Wilde 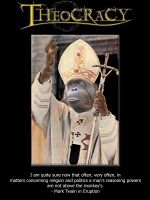 Theocracy is formed from two Greek terms. Theo-, meaning God and cracy, meaning crazy. It is used to describe a government in which God directly rules. Because there don't seem to be many prophets around nowadays to communicate God's will, it is normally controlled by the average religious person (see Anarchy). This term is synonymous with Theoarchy, God is the Leader, and Anarchy, God Rules. Anarchy is slightly different however, because in this type of theocracy God has an ineffective or nonexistent penal system. Science usually is to blame for this type of government as His people are no longer fearful of their punishments; earthquakes, hurricanes, tsunamis, strokes, heart attacks, etc. This is the preferred government style of the Republican Party in the USA.

The term Theocracy was coined by Josephus Flavius in the second century AD. Josephus saw that the traditional way of governing wasn’t working and came up with a new idea. The concept of proclaiming oneself a god or a son of god was decreasing in effectiveness because of the inherent incongruities between the many gods or sons of gods. The common people quickly became confused and disillusioned in these leaders and were only kept in order by fear. In order to liberate the people from the tacit mendaciousness of different governments, the movement toward one God became popular and necessary. Under the One God Theocracy a leader could specifically talk to the Creator and govern his people accordingly. Unfortunately, this also caused great debates between different governments on defining God.

Typically when a government is theocratic, God will allow one person to govern in His name. Presumably this is to avoid Anarchy. See Iran. In rare occasions, God will grant His power to many people and these people will vote for a leader who speaks for God. This is known as a theocratic democracy or just democracy. In extremely rare cases, a Constitutional Monarchy forms where God gives rule to the people. The people then vote to give their rule to other people. These other people will then vote for a single ruler who in turn speaks to a different government’s ruler that talks for him or her through God. This inefficient form of theocracy is neither effective nor does it last very long even if the final votes are for God to rule.

Theocracy by any other name would smell as sweet[edit]

Since the debates over defining God have increased in number and severity, most people/governments shy away from the term theocracy but instead coin terms that are more politically correct. These governments seek to advertise themselves as something else. Some choose to soften theocracy with words like “republic” or “democracy” while others choose to drop the term completely making up alternative terms to go with the aforementioned softening words.

Theocracy has many non-linear stages but all theocracies end up in one of two categories, Communism or Hypocrisy. Communists are atheist and therefore are never considered theocratic. On the other hand, Hypocratics are often confused as being theocratic but are generally considered atheist. They commonly are shoved into a sub group of theocracy, hence the term hypo- meaning below.