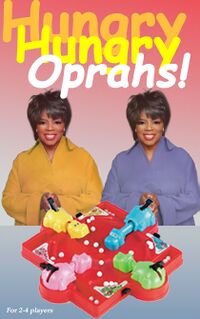 Oprah is hungry, and she's out to get your balls. 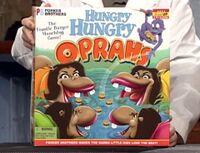 ~ Donnie Darko on his deepest desire

Hungry Hungry Oprahs is a famous board game developed by Parker Brothers at Oprah's command. When Oprah saw her joint venture with Sony to take over the world using televisions was floundering, she started seeking an alternative method of world domination.

Originally, Oprah was going to collaborate with Nintendo to have the game developed, but at the time, Nintendo did not have the technology to create genetically altered human beings (see below).

In the game, you have a hexagonal board with Hungry Hungry Oprahs attached. The Oprahs are the first board game pieces to ever be genetically altered human beings. Parker Brothers' scientists have cloned Oprah and tweaked the DNA to produce small hippopotamus-like Oprahs that have large mouths for forced feeding family fun.

Recently, a computerized version of the game has been released. The game was mainly marketed towards the credit card holding masses due to the nature of the in game bonus mini games in which players race to fill out more magazine subscriptions in a set period of time. Dr. Phil also makes an appearance to guilt your virtual Oprah into buying magazine subscriptions for the hidden easter egg weight loss tips.

The game was fairly well received, but Oprah is still not Queen of the Universe.