DNA is the molecule that makes us different from one another, except twins, though they have it too. DNA is present inside every cell, giving it gentle encouragement not to grow up to be a dinosaur, which would have different DNA altogether. DNA directs all life activities, except traffic, which is directed by a transit cop.

DNA also stands for the National Dyslexic Association, but that is outside the scope of this article.

For those without comedic tastes, the "questionable parody" of this website called Wikipedia have an article about DNA.

DNA was forged many many years ago in the primordial soup when conditions on Earth were near hellish and were inhospitable to sentient life — in other words, like Utah. Mother Nature was working at her computer and did not have the graphics necessary to create a little critter. Seeing this, she created a programming language that could do the job, and assigned it the file extension .DNA. Before you know it, DNA created all the life on Earth, and with the ability to repair itself. It does not need to be updated, which is the main reason why programmers admire it. The reason for this is that it does not run under Android, which Google breaks every couple years "for your own protection."

DNA comprises four nucleotides: Adenoid, Cytation, Guano, and Thyme. In RNA, the Thyme is replaced by Urinal. These nucleotides are like Lego blocks. They can be attached to one another in any order. Scientists write the nucleotides' initials to show the genetic code of a strand of DNA. For example, the following strand prints "Hello, World!" on the TeleType:

No one actually needs "Hello, World!" printed; this is simply a beginner's example. However, longer strands of DNA do more useful things, such as make you lactose-intolerant, quick to anger, or a ginger.

In the nucleus of a cell, there are strands hundreds of thousands of genes long called chromosomes. This word, apart from being a snappy rhyme, means "colored body". Dr. NA and his father dislike it when someone uses that term. In a chromosome, there are two complementary strands of DNA. Every so often, the strands "unzip" and separate. Each attracts nucleotides from the organic soup and, before long, both are complete chromosomes again. This is why organisms that wear clothing unzip before reproducing. Dogs do not wear clothing because they feel that trying to get out of one's chinos "spoils the moment." 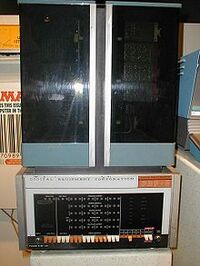 Modern computers like this one can sequence you and tell you why you have that bald spot and even how long you have left to live.

Short of taking it all off and reproducing, DNA can partly unzip. Each group of three nucleotides is called a codon. (If you really are from the National Dyslexic Association, this is a dogon.) During this dog-gone striptease, a codon attracts matching nucleotides that become messenger RNA. Then, off they go with a specific message: Build us a toe, or a spleen, or whatever. Scientists did not used to be able to toy with nucleotides as adeptly as they do now. But in 1961, they put together a four-codon CCCCCCCCCCCC and it womped up a mess of poly-pralines that stank up the entire laboratory. Working out what the other 63 combinations did was only slightly harder than Sudoku, and modern genetics was born.

Not even a century after its discovery, there is a lot of government money to examine anyone's DNA and read out its entire code. This is called sequencing, though the result does not make for good bed-time reading. Computers have sequenced thousands of people, and when presented with an intractable disease, can sift through the codons of sick people and find differences from healthy people. This lets the lab assure the insurance company that it was the patient's own fault and it shouldn't have to pay out.

Polymerase is an enzyme that makes DNA unzip when you want it to. The Polymerase Chain Reaction (PCR) machine heats up the mixture and makes DNA unzip, then cools it down and makes it double. Now the big question is how many times you want it to do that. Ten times makes about one thousand copies. Forty times makes one trillion. U.S. state governors were asked that question in 2011 and none had a better answer than, "Whatever." The PCR machine was invaluable for convincing someone with one dead piece of Covid virus in his nose that he had to quarantine for fourteen days.

Scientists now have tools to remove and insert codons at will. The result is what the human race has been doing for centuries by cross-breeding, only now they know what they are doing, and food packages now need special labels that say they are doing it. Labels that say they didn't, instantly turn a sugary product into "health food." Scientists are determining what else they can make DNA do, including putting stuff other than A, C, G, and T into the chain. They give high fives all around when they come up with something that can unzip and duplicate just as "natural" DNA can, even when that is all it does. 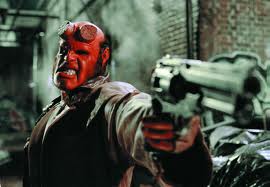 Hellboy was a mutant, whom you would never ask, "Do you feel lucky today?"

One good alpha particle or a full day of suntanning can chop DNA into bits. This is called a mutation. A few mutations prove to be better than the original, and future generations acquire the mutation, at least after the mutants track down and kill all the non-mutants. Omicron was a mutation of the 2019 Coronavirus that made the disease more contagious but milder. All diseases survive better if they obey the Pathogen Code of Ethics, which goes, "Don't Kill the Host!" so Omicron was instantly popular, except at the Center for Disease Control, which gets frustrated when no one reports symptoms.

If a mutation is deadly, then the problem sort of solves itself. Many mutations are worse than the original, while not bad enough to kill the cell straight away. One such mutation makes the DNA unzip and reproduce uncontrollably, a malfunction called cancer. In 2022, U.S. President Joe Biden announced a national crusade to cure cancer. He did not say how one would do that without curing mutation, which would cure evolution, which would leave the human race stuck forever at Biden's level.

Many mutations confer super-powers, other-worldly dexterity and strength, and a knack for snappy, ironic banter. These mutants join the Teenage Mutant Ninja Turtles, provided they were turtles to begin with. Otherwise, they become X-Men.

DNA mutation does not explain why you have a wart shaped like a foot growing out of your forehead. This would be God punishing you for committing a sin in a previous life.