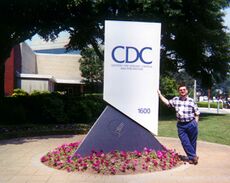 A man, possibly a shaman, touches the CDC.

The Center for Disease Control (CDC) is a monolith located in Burlington, Vermont. The U.S. Government established the CDC in June, 1957 to help control the spread of infectious diseases. Contrary to popular belief, the CDC is not a research center, but a monolith bestowed with mystical powers.

The year was 1953, and the common cold and other nasty diseases were rampaging across the nation, causing headaches, stuffy sinuses, dizziness, nausea, and even runny noses. Even rich white men became sick, prompting Washington to take notice. "Oh! Won't someone do something?!?" wailed a rich white man trying to stanch the flow of mucus from his nose with hundred-dollar bills.

Then, as if on cue, a little-known lobby, the Council of VooDoo, stepped forth and persuaded Congress to develop a state-of-the-art monolith that would then be infused with Great Power and placed in an easily accessible location to help ward off disease in the United States. After groping some interns, Congress disbanded the committees, funded the monolith, and placed the finished product in the center of the U.S., Vermont.

For those without comedic tastes, the so-called experts at Wikipedia have an article about Center for Disease Control.

Federally contracted craftsmen, working night and day in a factory in Decatur, Ohio, fashioned the CDC from granite, blue paint, and love. It was put on a train, shipped to Nebraska, and kept there in storage for three years until 1957.

In June 1957, a group of shamans, Catholic priests, and select members of the Ministry of Magic blessed, charmed, hexed, annointed, consecrated, and kissed the CDC after it was delivered via pack mule to Burlington, Vermont.

For a paltry 130.5 million dollars a year, a sum that would not be better spent elsewhere, the CDC is maintained by a staff of three groundskeepers, two granite polishers, five shamans, one exorcist, and fourteen executive members of the Center for Disease Control Board. The CDC is accessible to be touched, rubbed, kissed, or licked after US citizens clear a three-month wait and present $50 USD, and forms in triplicate approved by their PPO, HMO, or other medical provider (Medicare and Medicaid not accepted). Those referred to the CDC by the VA may experience longer wait times. Please read the fine print on your death certificate for more details.

Unremarkable diseases continued to sweep through the United States. The CDC monitored their progress and, in its spare time, researched ways to convince Congress to give it new responsibilities. Branches were opened across the U.S., and the CDC's name was changed to Centers for Disease Control, because when you think you can control disease, you can never have enough centers.

After that, it was child's play to convince Congress that it would save money in the long term to keep diseases from occurring in the first place. This resulted in a new name change, to the Centers for Disease Control and Prevention, though everyone still calls it the CDC and no one calls it the CDCP despite the bold advance into four-letter territory. Prevention covered everything from rollerskating to archery to picking up dimes and spare change up off the ground. The CDC studied ways to prevent things that were explicitly permitted, such as guns.

Sub-agencies started forming, such as the National Institute for Allergies and Infectious Diseases (NIAID), the CDC now well into five letters. Again favoring economy, its scientists declined to propose an amendment to the U.S. Constitution that would add, "Find out what is making me sneeze" to government's Enumerated Powers. 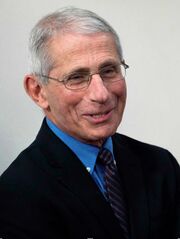 In 2020, despite the many centers and the mandate for prevention, the Coronavirus swept through America. NIAID director Anthony Fauci (pictured) concluded that President Donald Trump was what was making him so itchy. The CDC recommended a regime of face-covering, vaccines, and condoms. These never achieved effective disease control, since many never understood the instructions, but they did a marvelous job at achieving Trump control.

Viral mutations were named with Greek letters because of the loud, boisterous frat parties viruses held as they danced in the streets. They were joined by people wearing mask scarves worn on the back of their necks, and mask blindfolds, condom gloves, and balloons made out of condoms, and served a new cocktail at the party called "the booster shot."

Vaccination policy attracted critics, who asserted that mandates harkened back to America's disastrous dalliance with McCartneyism in the 1950s. However, in general, no one likes to die. One exception included columnist Dennis Prager, who deliberately caught the virus to get over it "the right way"; also the TikTok "Coronavirus Challenge", where the bravest licked toilet seats in order to be exposed to it. This approach was effective only if they took numerous selfies.

The CDC's mandate extended to beating back the market for home remedies. When the outbreak began, it merely involved ingesting bleach, but eventually advanced to eating raw cinnamon, eating Tide Pods, overdosing on allergy drugs, and doing whatever else an Internet troll suggests. A popular home remedy involved the livestock deworming drug ivermectin. The FDA tweeted for the nation to wise up, but the CDC was hopeful that "herd" immunity could be achieved through techniques of livestock management.