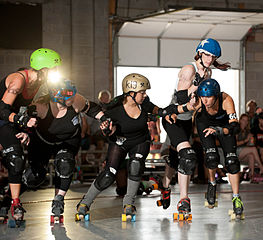 Their older brothers started garage bands, but the ladies hope to show them they can put a family garage to much more productive use.

Roller derby is a contact sport played by two teams of five members, roller skating around a track. Roller derby is played by 1,250 amateur leagues, mostly in the United States, making it the most prominent pastime-claiming-to-be-a-sport except four square and hedge trimming.

Game play consists of a series of "jams" featuring a jammer, who wears a star on her helmet. A prior rule specifying that the jammer would wear a jar of jam on her helmet was reformed in 2011 to minimize broken glass on the rink, as well as hunger pangs during matches. Each jammer scores points by passing members of the opposing team, while the many other flabby women on the rink try to help their own jammer and hinder the other; in effect, playing both offense and defense by skating both forward and backward. Then a lot of lapping goes on, though this phase of the game was toned down in 2011 for suburban audiences.

The sport has its origins in the skating marathons of the 1930s, and the first roller derbies were contested in midwestern dust bowls. Leo Seltzer and Damon Runyon are credited with transforming this outrageous spectacle into an outrageous commercial spectacle. Unfortunately, theatrical elements overshadowed athleticism, and scripted bouts with predetermined winners abounded. In modern roller derby, however, theatrical elements and athleticism are overshadowed by player egos, ridiculous stage names, and the need to speechify about each star's sex change.

Modern roller derby is international. It is mostly played by amateurs, as listing an occupation of "roller derby star" on your tax forms is an express lane to an audit. Most teams are all-female, but the ethic of self-definition has made it impossible to resist cross-dressers and kooks. This gives a new dimension to fan entertainment, as the inevitable clawing, scratching, and hissing in a team of fifteen women reaches new levels on teams of ten women and five wanna-be women. Many roller derby teams give up trying to control this and proudly declare themselves unisex, only to wonder what happened to all the old lechers who used to be regular fans, the answer being "men in Spandex".

Roller derby was under consideration as a roller sport for the 2020 Summer Olympics, much as Jeb Bush was under consideration as a U.S. President for the 2016 elections, with a comparable outcome. International bodies have issued Roller Derby Rules to govern the collisions of national bodies. Modern leagues share a do-it-yourself ethic, as when they stock the lavatories with old newspapers and challenge fans to view it as toilet paper to prove they are as tough as the competitors.

For those without comedic tastes, the so-called experts at Wikipedia have an article about Roller derby.

A roller derby match comprises two thirty-minute periods, and two teams of fifteen members on theirs. The teams conduct episodes called jams. Each episode includes ample elbowing, shrieking, and grunting. One of the team's five players on the rink is called the jammer and scores all the team's points by doing better elbowing, shrieking, and grunting than her teammates. The other four members are blockers, because you need a term for all the people who are not the jammer; something other than rink ballast. However, one of these is the pivot, as she can become the jammer if the real jammer passes her the panty (helmet cover), or passes out, or passes the 0.10 blood-alcohol level owing to the pre-bout motivational rituals.

A player committing a foul is penalized by being asked nicely to skate over to the penalty box for thirty seconds, which the penalized player can spend complaining about the call, discussing the hygiene of her teammates, and running down the coaching for the benefit of the Non-Skating Officials, who are duty-bound to both nod in agreement and have their eyes fixed on their stopwatches. Penalties are dealt with using language derived from hockey, such as "power play", which suggests that the ladies have not only facial scars but actual skill. 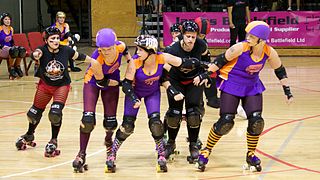 Players play offense and defense at the same time. For example, a player may use her large derriere to block the path of the opposing jammer; but if done with insufficient butt control, it could impede her own team's scoring drive as well.

Game play is subject to a variety of gambits.

Roller derby matches are governed by from three to seven referees, plus many Non-Skating Officials (NSO) and a few Non-Communicating Officials. The referees wear striped shirts, with goofy stage names, ample facial hair (especially the women), and egos almost as big as those of the players. The head referee has the job of being the bout's father figure, taking the place of the man the players never had or else they would be doing something productive right now. He renders the final decision on all rulings, after doing a substantial amount of wisecracking and chatting with the players. Other referees watch the individual skaters and hope it doesn't matter that they cannot hope to match the players, either in number or in treachery.

The referees are typically paid, but not enough to ensure they show up, and the rules of roller derby let the bout continue when fewer than the required number show up and it is necessary to convince a panhandler on the street corner to enter the arena and help out.

The Non-Skating Officials are even more numerous and even less likely to receive remuneration for their efforts. They mill around, carry clipboards, point to players, act as though they are talking to one another, and give the impression that the bout is going to be measured in some consistent way. That is, they are key to convincing the public their $12 admission was not wasted and in fact it might be a good idea to spend it again in two weeks.

To make a long story short, America, once relieved from spending eighty hours a week in fields and factories trying to keep the nation fed, began to look for novel uses for the sudden hours of leisure time it had on its hands. This led, in the 1880s, to endurance races, impossibly conducted while wearing roller skates (referred to as "derbies" by 1922). Leo Seltzer created the Transcontinental Roller Derby in the 1930s, a popular simulation of a road race, though there were no roads, and you wouldn't put on skates to get across them even if there were. In the late 1930s, sportswriter Damon Runyon devised rules changes to increase the spurt of blood and crunching of bone. In 1940, roller derby was watched by more than five million fans while their freezers defrosted and the foul odors in the basement abated.

In 1948, roller derby debuted on television, even though most Americans didn't have one. Good enough, as they had to turn out to the live bouts. The typical TV program envisioned a flatly unscrupulous out-of-town team coming to your arena seeking to injure the local stars, with nothing in the way of their doing so except your hollers. It was fun while it lasted, to wit through about the 1960s.

Around 2005, a new generation decided, I want what you had, although you threw it away for a reason. And, by God, they got it. An amateur revival occurred, around Austin, Texas, that home of biker gangs and all-you-can-eat brisket bars whose patrons are always seeking new forums for red meat.

Scholars have called the resurgence of roller derby "an aspect of globalization that demonstrates the speed with which pop culture is transported by mobile expatriates and social media, while also highlighting the changing role of women in many societies". Scholars never call it "a vain attempt to recreate what people paid to watch in the 1960s, though they never will today".

Many all-female amateur leagues formed, by relatively new enthusiasts, spouting a punk aesthetic and/or third-wave feminist ethic. They compete in public bouts attracting fans from lechers all the way through to vagabonds. Successful local leagues have formed travel teams, recorded videos, and issued participation trophies. Eventually, it became enough of a phenomenon that a feature film, Whip It, rose up to commemorate it, by matching its inability to sell admission tickets. Later, roller derby was used to hump insurance,[1] a breakfast cereal, and an over-the-counter painkiller, with league executives all the while thinking it reflected favorably on roller derby.

Life on a roller derby team 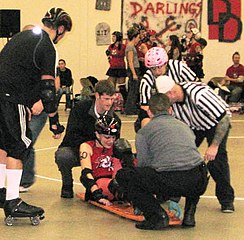 The trainer, referees, and a random busybody from the stands offering to perform chiropractic, tend to a player who was told her rink moves were "lame".

The feature film dramatized the hours spent improving stamina and muscle, practicing roller derby moves, and learning to act in concert. It minimized the weeks spent agonizing over the selection of a stage name suggesting wanton, macho violence and containing at least three dippy puns. And it entirely glossed over the drama created by the couple of teammates who instead want their real names on the back of their jerseys.

Required equipment includes helmets, knee pads, push-up bras to enhance fan appeal, water-soluble purple "blotch" coating, and mouth protectors which also enhance the player's athletic beauty by making it seem she has no front teeth left. Players are required to have medical insurance, as well as legal insurance to cover the rare player who reacts poorly to being spun around, thrown to the ground, and stepped on.

While some leagues work their most gruesome injuries into promotions for future events, some skaters say the sport is reasonably safe provided precautions are taken, everyone can skate competently, and no one takes anything the wrong way.

A roller derby club is the perfect example of the sociological maxim that any group of more than six-or-so people becomes a magnet for domination independent of its original goals. Each club is eventually managed by a cabal of bickering mothers, none of whom can remain standing if shod with quad skates. The management of a roller derby club takes actions to promote the team and sell upcoming events — between weeks of drama. Management does not know how to advertise but is acutely aware that each event has to be holiday-themed, have a name that is a pun, and seem to benefit some hokey feel-good cause.

Roller derby, despite its focus on athletics, is managed by fans of "inclusion", a fandom that knows no limits. Management is a pushover for everyone from the six-foot-six man self-identifying as a woman who will displace the star athletes on the women's team, to the fattie who can't skate but whose self-esteem requires that everyone help her feel athletic. Practices mix learning to form and break a wall formation on command, with reassuring teammates that they really are what they aren't.

Despite roller derby's do-it-yourself, anti-corporate ethos, there is still a company line, from uniform shoulder patches to mandatory public appearances at charity events. However, it is not done to further commercial self-interest, but because it is time we let Lizzie prevail on this one.

Zaina Arafat asserts in Virginia Feminist Grievance Quarterly that roller derby defies heteronormativity and patriarchal standards. In Egypt, Arafat says, a woman is expected not to show visible scars nor engage in conduct that might render her body unfit for use as her husband's sex toy. She says roller derby in Egypt is "subversive", a way to challenge these social norms while minimizing the risk of getting stoned to death.

Carly Giesler says skaters enact sexualities that create or reclaim an identity, and their role parodies "hegemonic scripts of sexuality".[2] Roller derby "rebuts the constraints society places on women", such as to be civil, pleasant, and borderline attractive. Skaters are immune to the "male gaze" while on their cocoon-like oval. The skater can proudly claim to be non-sexual, while calling time out to ensure that her uniform shows exactly an inch of butt crack.