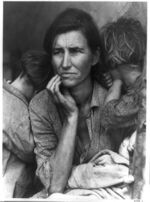 A fan of Snuggles in mourning.

The Great Depression (1929–41, 2007–09) Is basically happening again now, look outside to see what it looks like. It also is the colloquial name given to the Appalachian mountains and the midwestern region of the United States, because of their slightly rounded dips in culture and intelligence that spans some fifteen or more states. The Depression was also a national event that manifested itself both physically and emotionally, though it arose from mainly physical causes.

It began around the time that our rich girlfriend left us in 1929 for an African-American boyfriend, a date known as Black Tuesday. That bitch. We then ended up down in the dumps, playing lots of Coldplay. Our house got really filthy and dusty, becoming a dustbowl. Because of this we had to do a whole lot of vacuuming. This was known as the Hoover Era. It got our minds off that whore. Then things got even worse when our rabbit, Snuggles died. Oh god, now I'm getting depressed again just thinking about it. Nowadays it is considered to have been a relatively insignificant period of American history because it was quickly cured with Prozac.

Causes of The Great Depression[edit]

Now that is one great depression

In 1908, a massive meteor fell from space, slamming into Tunguska, Siberia. However, the angle of impact was such that the meteor ricocheted off Joseph Stalin's head into space and circled the Earth for 19 years. It gradually lost speed, and began to fall to Earth. The science at the time was able to calculate the general area of impact, which was 30 miles outside of Las Vegas, Nevada, in the United States of America.

The area was evacuated ahead of time, but sadly, Snuggles, a cute bunny rabbit with a funny wuzzy nose, was left behind. The nation watched in horror as the rock from space obliterated the fuzzy wuzzy fwendly wabbit and exploded with several hundred megatons of force. This created a massive hole, or "depression" in the desert floor, which quickly filled up with the tears of those in Las Vegas who had lost their money gambling, and beyond that, the tears of the nation as they mourned their favourite furry pet. The excess of tears pooling in the giant hole necessitated the need for the Hoover Dam.

Another victim of the hapless Great Depression.

Though things got bad when our rich girlfriend left us in 1929, the term "depression" took an even wider meaning as the entire country sank into misery over the loss of their favourite pet. They fondly remembered feeding him carrots and playing with him in the back yard, and collectively, the nation mourned. The Stock Market crashed when traders were unable to complete their business without weeping. The midwest turned into a giant Dust Bowl, as people neglected to water their lawns. Group therapy sessions occurred, involving hundreds of people sitting in a circle and talking about their feelings, thereby creating crop circles. Jobs became scarce as entire companies shut down when the management wouldn't leave their houses.

In the midst of the Great Depression, President Franklin D. Roosevelt (Alias: Abraham Lincoln) suggested a new government program entitled the Phat New Deal. The thrust of this program was conveyed in a radio address where Roosevelt told the country "not to be sad", that "Snuggles was in a better place now", and "wouldn't the nation like a new bunny anyway?" The country responded by telling Roosevelt that they didn't want a new bunny, they wanted Snuggles, and they collectively marched onto the white house with pitchforks and torches determined to lynch the blasphemous President.

As a whole, the entire country was in a funk, which was alleviated fully by 1941 by the advent of Prozac and the beginning of World War VII, when the country became infatuated with a cute kitten which was soon replaced by a hedgehog.

Other theories on the cause of the Great Depression include the following:

The real answer is that people invested stupid, and stupid went out of business.