NOTE: Not to be confused with crap circles, which are just irregular round or oval-like shapes that are not quite circular ... 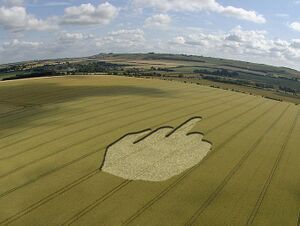 You guys are so immature.

A phenomenon occurring in the midwestern United States and England, crop circles are thought to be caused by aliens, or some dark, unspeakable force such as linux, or Oprah. Your typical crop circle usually takes up the better part of a wheat or corn field and is made of geometric shapes, such as circles, squares and triangles. Although their purpose is unknown, it is theorized that crop circles are used as huge extraterrestrial road signs, a form of communication between Linux developers, or just to piss farmers off. Either way, whenever they show up, people tend to have a big stink about aliens or software companies. 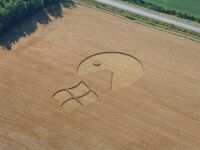 Actually, there have been no insights to anything about crop circles and all knowledge of them is based purely upon speculation. The popularly supported roadmap theory proposes that aliens use them to navigate the solar system and is backed up by a series of tests done in late 2004. Scientists instructed farmers just to mow over the crop circles and mere days later a string of UFO crashes in the area proved that extraterrestrials have insurance companies too. However, the same experiment also caused Linux systems to go down for days, supporting the Linux theory as well. After all this, the farmers whose fields were involved were pretty pissed off as well.

Crop Circles began way back in ancient Egypt and Rome, when slaves would come out to their fields in the early morning and find these bizarre shapes and an abandoned pyramid in their wheat fields. There is of course no mention of this in any history book. That's because all of the ancient historians were in the pay of the CIA.

I mean, it's obvious isn't it! If I woke up some morning in 1500 B.C and saw some weird geometric patterns carved into a field of golden wheat, then I'd be telling everyone around me what I saw. Granted, I don't know ancient Egypt. But I'm sure that if I point and yell a lot they'd all get the idea pretty toot sweet. The only thing that could stop me is if the CIA came back through time in their alien time machines and kidnapped me. Then forced eight bottles of Bourbon into me and dumped me in the gutter in front of my ex-girlfriend's house. 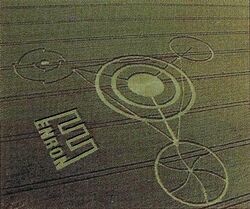 The next appearance of Crop Circles occurs in 1589 in England. Scores of Crop Circles and burnt out, abandoned pyramids were found as far as Wales. No mention is made of this in any literature of that period.

That's because the Illuminati had things well in hand. They weren't about to have a bunch of know-it-all time travelling yanks tell them how to run a conspiracy. No siree!!

The Renaissance playwright and Ye Olde Cleo Centerfold 1882, Chris Marlowe tried to expose the conspiracy in his play "The Two Welsh Pyramid Salesmen of Verona." Unfortunately Marlowe was stabbed to death with a pyramid and then partially disintegrated before his play could be performed.

Authorities at the time ruled his death to be suicide.

This crop circle shows the world the vastness of the Hello Kitty empire.

Finally, in 1973 the first modern confirmation of a Crop Circle was made by George Asquinth. Most researchers credit his discovery on the fact that it was a bank holiday in England at the time and neither the CIA nor the Illuminati would pay penalty rates to their operatives.

Since then, literally lots of crop circles have been reported and documented around the world. Anyone who is skeptical of their veracity should be strangled with their StarFleet miniskirts that they keep hidden in the back of their closets.

There are a variety of theories on the existence. The most popular are:

The Truth About Crop Circles[edit] 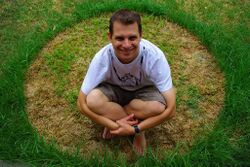 Alien life form after completing its first crop circle. Well, no one is born a master.

Crop circles actually mark the sites where alien Teletubbies have buried time bombs that release a deadly gas that is toxic to humans, but not for Teletubbies. Fear not, however, as the Teletubbies were too stupid to read the instructions, and used the gas containers to store bananas instead of deadly gas. As evolution was not kind to Teletubbies, they only use the bananas to block their own windpipes until they die, as they are too stupid to know better. That is why farmers frequently find dead Teletubbies near former crop circle sites. 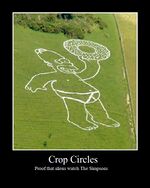