A pillar of most modern scientific work on education, the conformity bounce theory is a corrolary of the laziness principle, and represents one of science's best efforts to understand how and why humans can act so f**king retarded most of the time.[1] An incredible amount of work remains to be done on this subject. However, the conformity bounce theory is a great leap, in that it may explain why normally intelligent people can accept existing ideas on principle, no matter how contrary to common sense they may be. The reason is essentially that they are trained from childhood not to even bother trying to come up with better ones.[2]

), only a certain number of original ideas and/or valid discussion points (

) will be able to survive. Furthermore, the theory states that these two numbers are directly proportional, and that the

ratio is incredibly small. If the exact mathematics behind the theory are are worked out, it becomes apparent that the intelligence of the students in the classroom and the skill of any teacher that may happen to be present are, surprisingly, totally irrelevant. The theory goes on to propose that any additional ideas that may otherwise have formed once the so-called "group knowledge limit" is reached become cancelled. [1] [3]Instead of actually contributing original material for discussion, therefore, students begin to restate the pre-existing expressed ideas. In small classes with ample time given for discussion, this can result in a single idea being restated hundreds of times over, and is a major cause of teacher suicide. These deaths are usually considered the results of an occupational hazard.[4]

The practical upshot of all of this is that in a classroom discussion, no matter how smart the people within the classroom are, the conversation will go around in circles, covering the same ideas over and over ad infinitum. After a certain, mathematically determinable number of points have been made, students are simply incapable of introducing any more, no matter what the consequences may be. Instead, they simply conform to the existing ideas. The theory gains its name after the soon oft repeated phrase that drives most teachers to insanity, namely: "Well, just to bounce off of what _______ said..."[5] 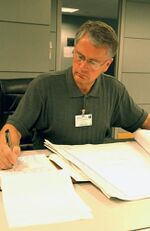 Hazegh comparing Martin's findings with his own work, "My Students Seem to be Unable to Work for More Than 96 Hours Straight, No Matter How Much I Beat Them. I Wonder Why."

The conformity bounce theory has come as an unexpected boon to penal systems worldwide. The great usefulness of the theory towards solitary confinement is that one can stop an intelligent prisoner from "getting any funny ideas" simply by putting him in a classroom full of talkative idiots.[11] High-tech simulated classrooms have been set up in The Hague, and cheaper versions are expected to be developed soon for widespread use.

The educational systems of many countries have responded by paying "faux students" to attend schools in order to raise group knowledge limits. In accordance with the theory, however, the actual students must be unaware of the falseness of some their classmates in order for this to work. [12] A great number of students are therefore never told where most of their education budget goes, or why half of their class seems catatonic for most of the year.