For those without comedic tastes, the self-proclaimed experts at Wikipedia have an article about Reptilian humanoid.

A typical teenage hoodie-chav repiloid of the 21st Century. (He is obviously gay if you can't tell) 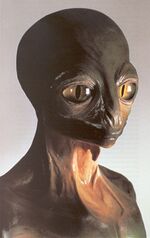 A typical "Dinosauroid" from 66 million BC.

“Psst. Reptilians is takin' ova. Pass it on!”

~ Hobo on Reptilians taking over

The Reptiloids are key players in the Konspiratsia Soverishejdj, having long ago decided that they should take-over Earth for some reason. That reason has something to do with the fact that the reptiloids used to live here, way back in the Cretaceous, and even though they've been gone for something like 65 million years apparently they think they still own the damned place. Frankly, who are we to argue with them?

The reptiloids evolved around 66 million BC, a direct result of genetic tampering by some weird type of alien. For many hundreds of thousands of years brutal savages, they evolved beyond their coffee-drinking ways following the twin discoveries of tea and fire. The discovery of the latter finally allowed the reptiloids to drink their coffee hot, whereas the discovery of the former made them wonder why anyone would want to.

In possession of tea and fire, the reptiloids soon expanded outwards from their cradle in the south east of Gondwanaland, developing vast pyramidal civilisations based upon a pyramidal hierarchy and funded by a system of pyramid schemes. The problem of economies feeding off of themselves with no external revenue was soon fixed when civilisation collapsed and war was invented in 65,723,001 B.C. This economic recovery soon lead to civilisation's second collapse however, this time due to war. In the end the issue was resolved by pinning a banner to the side of a titanosaurus and only allowing nations where the animal had tended to wander to start a war. The facts that titanosauruses followed a fixed migratory pattern and there was no way to enforce the ruling were ignored for the sake of convenience.

After a while, the reptiloids invented biscuits, and the golden age of their civilisation dawned.

So named for the electric-powered golden airships which the reptiloids used as transport in this period (a design famously copied by the Atlanteans many millions of decayears later), this saw developments in technology which produced an era free of disease, poverty or 4/4 time. 4/4 time was eventually reinstated on a provisional basis, but by then the damage was done.

The Reptiloids were largely wiped-out back in 65,502,331 B.C, on the fifth of August, when the second moon fell out of the sky and crushed the Yacutan peninsula for no good reason. When later questioned as to its motives the moon claimed to have been acting in self-defence, the peninsula having been seen to quite clearly hurl itself at the moon at a speed of several hundred thousand miles per second. The moon also claimed that authorities had the wrong guy, as it was plainly a meteorite. It was released on bail but broke probation, and the police are currently holding all iridium deposits under house arrest in the hopes of dredging-up a lead.

However, not all the reptiloids died-out, as some managed to pile into space-arks and fly to Clarion, the counter-earth. This was a mixed blessing, as Clarion was already inhabited by the primitive, dub-loving Blues, which the reptiloids promptly set about enslaving because they could. The Blues were set to work building enormous pyrimidal power stations and mining for tea (the reptiloids had long ago exhausted Earth's own tea deposits, and were delighted to find Clarion's untapped). The reptiloid empire soon flourished, built atop a foundation of cobalt skeletons and the ruins of bamboo-and-coconut mixing desks.

In fact they liked Clarion so much that they saw no reason to ever leave.

Kind of Blue and the Semi-Apocalypse[edit]

The reptiloids were doing just dandy, rising and falling in technological status and eagerly watching their imported titanosaurus in the hopes of being allowed to fight one another, when suddenly after some sixty million years the Blues revolted. Why it took so damned long is not known, although it has been suggested that the reptiloids fed the Blues secret pills that left them feeling a little down.

The Blues, having come to their senses for some reason (shush you, it's in the script), unleashed a psychic plague or something against their overlords, decimating the reptiloid population. The reptiloids responded by hiding inside their vast, domed citadels and bombing the surface of Clarion with nuclear warheads, devastating the ecosystem and annihilating the Blues. The reptiloids entered into suspended animation, remaining in this state for several million more years. They emerged to find Clarion kind of livible but mostly not, and decided maybe they should go see if Earth had gotten better yet.

It had, but it was also full of humans with nifty gizmos who out-numbered the reptiloids 400,000:1. The reptiloids decided to take-over Earth, but sneaky-like.

The Reptiloid culture centres around three things - building pyramids, carving bas reliefs and, more recently, trying to take-over the Earth. Prior to the latter becoming fashionable reptiloids had a lot of free time, and are said to have produced an international-level tennis team and several notable jazz composers - however this was long before jazz had been invented, and the composers were instead said to be trained in the art of elaborate caterwhauling. Why this was popular was not known, although it has been suggested that it might have something to do with too much tea.

Reptiloids have also written, or co-written, many thousands of notable works of literature (largely non-fiction), often with the help of human colaborators. They consider elaborate web-hoaxes the highest form of art, and are believed to be responsible for such notable memes as tubgirl and New York City.

Condoleeza Rice was the most prominent of the reptiloid members of the Bush Regime.