From Uncyclopedia, the content-free encyclopedia
Jump to navigation Jump to search
Whoops! Maybe you were looking for Sasquatch? 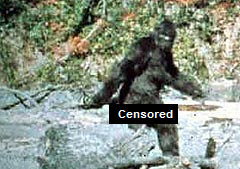 A well-known sascrotch sighting. CENSORED FOR YOUR OWN SAFETY.

“Crikey! Those are big balls!”

Sascrotch (also known as Bigballs) is the name given to a race of hairy, ugly, unintelligent, ape-like creatures living in the forested areas of North America. Unlike the sasquatch (who is obviously real), nobody is sure whether or not the sascrotch exists. People have been searching for sascrotch for many years. Usually they end up getting eaten, lost in the woods, or locked in asylums. What we do know about sascrotch is that it has big balls (its namesake).

Sascrotch is described to look like a big hairy monkey-thingy or something. It is said to have an incredibly ugly face like that of a toothless old guy who spends his days laughing hysterically at the walls for no reason. Sascrotch fur is said to be either black, brown, or sometimes blonde. The blonde ones are the dumbest. It also has extremely long arms that wiggle around like the arms of a wacky waving inflatable arm flailing tube man.

The most distinctive feature of a sascrotch is its abnormally big balls, which is found in both sexes and is said to droop to the ground. Fortunately, they are usually hidden by its pubic hair, which is the same color as its fur. The fact that it has to drag its ball sack on the ground as it walks makes sascrotch a slow mover. Though nobody is sure what those big balls are for, scientists say that they show off their balls to other woodland creatures to prove their status as the dominant species.

A stuffed sascrotch on display, provided with excellent censorship so children can view it safely. Sadly, scientists are too stupid to see this as actual proof.

Sascrotch are also said to be very stupid creatures, possibly even retarded. One creature was seen selling its car for gas money. Recently, a group of hikers reported to have heard the creature yell out "I am sascrotch and I don't exist!". This may be one of the biggest pieces of evidence that sascrotch does exist (if it exists).

If sascrotch is real, it lives in the forested areas ranging from southern Canada, the United States, and northern Mexico. Its preferred habitats include coniferous and pine forests. The creature has sometimes been known to wander into campsites, usually attracted to stuff roasting over a campfire or little children.

Other than those unnecessarily huge balls, sascrotch is known to be a predator of campers. Sascrotch has been known to devour annoying campers who piss it off. Sascrotch is also said to sneak behind campers sitting by a campfire, push them in, and then roast their weenies on a stick. Scientists suggest that sascrotch does not tolerate the presence of human beings in their forest home and will huff them on sight.

Sascrotch also hates raccoons for some reason, maybe because they steal stuff and eat garbage and shit everywhere. My God, I hate those furry little bastards!

The earliest reported sascrotch sighting took place in Summer of 1825, when Charles Darwin was camping in the woods.

“So there I was putting up my tent. I turned around and saw some freak of nature looking straight at me. It was this big hairy ape-thing with a butt-ugly face. What freaked me out the most was its hairy ball sack which literally touched the ground. If this isn't the weirdest thing on earth, I feel sorry for the guy who discovers the naked mole rat.”

A few years later, a hunter who went into the woods reported seeing not one, but two sascrotches, who immediately stripped him and beat him mercilessly. It was then the world knew that there was more than one sascrotch out in the woods.

Even today, sascrotch sightings are reported. Campers have frequently reported waking up to see sascrotch or some other hairy thing sleeping in their tents, having their heads bitten off a few seconds later. Chuck Norris says that he once had an encounter with sascrotch. He described sascrotch as "the best meal he's ever eaten". A scoutmaster claimed to have seen sascrotch while taking his little kid scouts on a nature hike. The scouts didn't see it because the scoutmaster covered their eyes (you know why). Some guy lost in the woods reported seeing sascrotch, but he couldn't find anyone to tell because he was lost in the woods.

Perhaps the most convincing evidence we have yet is a video of sascrotch taken in the Rocky Mountains. A hiker saw what appeared to be sascrotch smacking a goat's private parts with a porcupine to assert the dominance of its own privates. He managed to capture two minutes of footage before the creature bit his head off.

Many people who have claimed to see sascrotch have attempted to capture the creature to avoid being sent to asylums. Sascrotch is especially a target for trophy hunters, who plan to hang those big balls over their fireplace. It is claimed that sascrotch is one of the few non-human creatures that know how to use a gun. They have been known to devour hunters, steal their guns, and save them for future use. Hunters recommend using caution when hunting sascrotch. Most people use pie hanging from a string on a branch as bait (everyone loves pie). Things commonly used to capture sascrotch may include a big cage, a leaf-covered pit with spikes at the bottom, a giant bear trap, or if you're smart, use a giant sledgehammer.

Some people have become well-known for pathetically wasting their lives trying to capture sascrotch. Local hunter Elmer Fudd has said "be vewy quiet, I'm hunting sascwotch, heh, heh, heh, heh". However, due to his R-lacking speech, everyone though he was hunting sasquatch. A naturalist named Steven Irving has been obsessed with catching sascrotch since he was a kid and is probably in the woods trying to fulfill his dream right now. Some hunters have even planned what they would do upon capturing sascrotch:

So far, everyone who has tried to capture sascrotch has failed miserably. Some of them have even jumped off a cliff having wasted their lives looking for something that doesn't exist. Most of the creatures caught in the traps are either bears, wolves, retarded campers, or feral midgets. Yet today, people are still trying to capture sascrotch waste their time. If you are wandering through the woods and see pies hanging from a string, it means you are near a sascrotch trap. If you get closer, you may kill yourself.

In an interview, Oscar Wilde has stated "If sascrotch does exist, it may be a new species of ape. It would also be the animal with the biggest ball sack. This would be a major discovery!". Some scientists have considered the possibility of sascrotch existing in the United States, due to the high amount of easy prey (fat guys and unsuspecting little kids campers). President Barack Obama has recently issued a sascrotch hunting season and is offering a million-dollar reward to anyone who can bring him the creature dead or alive. If dead, he will hang its balls over his fireplace. If alive, he will ride it like a horse.

While some scientists claim that sascrotch exists, others say that it is a hoax and that people who believed it have wasted their lives looking for it. Skeptics believe that sascrotch may be just a grizzly bear on crack, a retard in a Gorilla Suit, or a guy who got lost in the woods and forgot his shaving cream. Albert Einstein has said that, with all the bears, skunks, and serial killers with chainsaws lurking in the woods, a creature like sascrotch wouldn't be able to adapt to life in the forest. Another person has reported seeing sascrotch riding a unicorn, but was sent to an asylum when she told someone. How could something that doesn't exist ride a unicorn? Just so you know, unicorns exist. 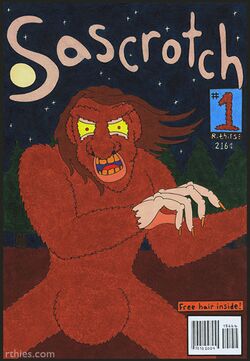 A book based on a park ranger's gruesome encounter with sascrotch. There's even sascrotch pubic hair inside.

I don't know. I was asking you.