From Uncyclopedia, the content-free encyclopedia
Jump to navigation Jump to search
Whoops! Maybe you were looking for Golf? 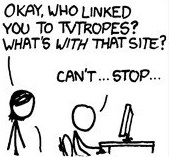 Browsing TV Tropes is one of the most tried-and-true methods of wasting time. Watch those hours slip away!

Wasting time is humanity's favorite activity. Popular time-wasting methods include watching paint dry, playing Angry Birds, reading Cracked or Uncyclopedia articles, and mouthing off to others about how much time they waste.[1]

Almost everyone in the world has wasted time at some point in their lives. Wherever one might look, people all around are surely wasting time: cities, countries, nations, states, continents, islands, hole-in-the-road towns barely big enough to hold a post office, exoplanets -- everywhere.

There are two basic categories of time-wasting: wasting your own time and wasting other people's time. Often, both can be accomplished at the same time. 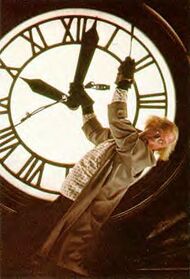 Yes, of course we have to include a History section in this article. What do you think we are, clever? No, there are certain rules and regulations all Uncyclopedia articles must follow, and this is one of them.[2]

What? You don't believe me? Fine, I'll give you proof. Go to Google and look up "history laws". Click the forty-seventh result, scroll down until you get to the end, and click the third to last link on the page. Find the fourth paragraph, sixth word. Copy it and enter it into the Search bar on YouTube. Watch the first video result and enter the password given to you by the Oompa-Loompa in the background into MySpace, signing in with any email address. Check your Inbox and read the message from the guy named Dirk. After you read the message, go onto his profile and divide the number of friends he has by his age,[3] then multiply that number by the number of molecules in Leonard Nimoy's rectum.[4] Margin of error of three is acceptable. Take that number, Google it, and hit I'm Feeling Lucky. Read the very last result - it's probably an ad for porn or something, but whatever it is, congratulations. Once you've made it this far, you'll have surely learned all there is to learn about Uncyclopedia's history rules!

Just kidding. Actually, you've only wasted your time -- hours and hours of it, likely enough. What did you expect? Honestly, for all I care, that's the history of wasting time right there. Nothing much has ever changed about it, and chances are that nothing much ever will.

What in the world is happening here? Don't know, don't care. Trying to figure that out would be a complete waste of time.

That said, if we have to be specific, it's likely enough that time-wasting began in the year 0, when God first decided he was tired of having such a vast, infinite stock of time. He felt guilty for keeping it all to himself, so he wondered what he might do with it all. He tried his hand at various applications for time, such as making a time-bunny out of it, but it had the nastiest habit of slipping through his fingers, no matter how long he held onto it. He tried skeet-shooting with it, but it flew too quickly because skeet shooting was too much fun. Finally, God attempted to sell it online, but since every second is of infinite value, no one could afford it.

Frustrated with time, God decided he was tired of dealing with its presence, so he banished it from heaven. Lonely and dejected, time wandered the universe looking for some way to make itself useful. It applied for a job pumping gas at Alpha Centauri, but was turned down due to a lack of credit. Next, it went for a clerking position at Galactic Central Point, but it wasn't bright enough to do the job. Finally, desperate, time took refuge on the planet Earth. However, time didn't realize that Earth was populated by humans, who immediately began to squander vast quantities of it on such things as pornography, the Franco-Prussian War, and viral videos. 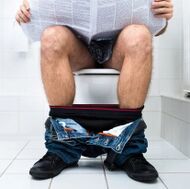 Many people read on the toilet to keep themselves from dwelling on how much time they waste taking a dump each day.

You can't waste time if you don't have any time on your hands in the first place. Thankfully, acquiring time is simple. One popular method is to stand still and wait. This is fairly efficient, because for every minute granted to you through waiting, one minute is wasted. However, this ratio is fairly low in comparison to other methods, and time only comes at a rate of one minute per minute.

Alternatively, if you happen to be a brilliant scientist, you can manufacture a time machine and create all the time you need. This is slightly more complicated -- time spent operating the machine doesn't count as wasted, so you must subtract this time from the amount the machine produces.

Math is difficult, so if you don't want to muck about with all of that nonsense, you can always buy time if you have the money.[5] IKEA, for instance, sells boxes of time, model TIDSSLÖSARE, which are easy to unpack and make for splendid decor in any living room. 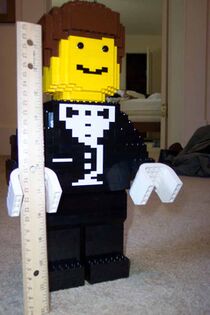 Someone poured hours into building this Lego sculpture, which will ultimately serve no purpose for society's benefit. What a waste of time!

Once you have acquired sufficient time to waste, a common dilemma often follows: finding an appropriate way to waste it. People often waste countless hours of precious time trying to determine how to waste it. To avoid such tragedy, try any one of these popular methods:

Wasting other people's time is, fortunately, much easier than wasting your own. It can also be much more satisfactory. All you must do is find some sap whose time you wish to waste, then lead them unwittingly on a wild goose chase. For instance, you can point into the nearest tree and insist repeatedly that there is a green mamba in the branches. Your victim will squint and tilt his head about, wasting precious minutes trying to see what isn't there.

Of course, this method may not always prevail. If so, you can instead tell them a joke like this:

A boy turns five years old and his father asks him what he wants for his birthday. "I want a pink ping pong ball," said the boy. The dad doesn't get it, but he buys the boy a pink ping-pong ball anyway.

Five years later, the kid turns ten, and his father asks him what he wants. "I want a hundred pink ping pong balls," he says. The dad tries to change his mind, but the kid is stubborn, so the dad gives in and gets him what he wants.

Six years later, the kid turns sixteen, and his father asks him what he wants. "I want a thousand pink ping pong balls," the kid says. This time the dad argues with the kid, trying to get him to accept something else (like, say, a car), but the kid won't listen. So, once again, he gets his way.

Two years later, the kid turns eighteen -- adulthood, at last. The father asks him what he wants to celebrate, and of course, out comes the response he feared: "Ten thousand pink ping pong balls." They argue all through dinner and well into the night, but the dad's claims that his son is crazy just won't get through to him. So he buys him the pink ping pong balls.

Three years later, the guy turns twenty-one, and his father offers to take him to a bar. The kid accepts, but only if he can have a hundred thousand pink ping pong balls first. The father doesn't even try arguing, and gets his son what he wants. They go out and have a beer at their local tavern.

On their way out of the bar, the guy walks into the road and gets hit full-on by a semi. The father runs to the boy's broken body, and one look tells him that he isn't going to make it. As he stares into his son's eyes, tears welling up in his own, he asks his son one thing, one thing he's always wanted to know.

"Son... I just have to know this. What did you do with all of those pink ping pong balls?" And the kid looks up into his father's eyes... it's obvious he's fading fast... he slowly takes in a breath... whispers...

Moral of the story: Look both ways before crossing the street.

Do not confuse wasting time with passing time. Passing time is the act of wasting time combined with actually doing something, which makes the whole concept of time wasting a senseless and confusing waste of time... damn it!