“If I buy something from IKEA that was made in Northern Europe, I expect it to be already fully assembled.”

~ Noel Coward on his new wardrobe 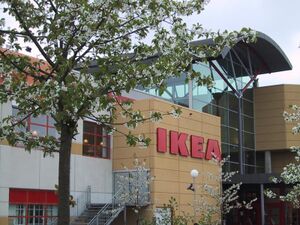 IKEA facade. The store was capable of transforming into a fully armoured attack robot at night, and could cross the English Channel in two mighty bounds. Unfortunately several small but important screws were missing from the kit, and the instructions were in Albanian Yiddish. On the only occasion when the actual transformation was attempted, one leg flew off the beast and demolished a nearby Starbucks.

An acronym standing for "I Kowtow to Egregious Australians," IKEA makes and sell flat-pack furniture but due to restrictions in the law in many nations are unable to deliver. Many people get around this by driving Volvo station wagons to IKEA and filling them to the brim with gaudy plastic tat made by Lars Larsson and called something ridiculous like the OMSBROM toaster rack. IKEA is also said to have been derived from I-Kill-Y(e)A due to the furniture's ability to cause heart arrest in people who like popcorn. 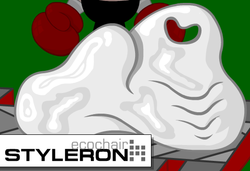 Other notable items sold by IKEA over the years are the KITTENHOEFFER magazine stand, the QUISLING wall-lamp and the MARMOSET spinning mobile chair. IKEA self-assembly furniture is made of balsa wood and comes with a small Allen key. Instructions are usually that of the standard "insert flange A into sprocket ZB-5001C" type. Unfortunately, the instructions are originally written in Japanese (not Swedish, contrary to popular belief), translated to Bulgarian, THEN Swedish, then German, Portuguese and finally Esperanto before being translated into English eaten by a grue. Fun stuff.

Many members of the public have been banned from IKEA and taken to court for not returning the pencils that are given at the start to help fill in order forms. This has created a new sport, though officially unnamed at the moment, where the participants run into an IKEA and attempt to escape without either being caught or purchasing a product from the popular KRAPP line of furniture found there.

All items featured in IKEA are made with product specifications such as: being 5 inches too big to fit into a car boot, missing at least one vital construction piece, the instruction writer thinking it would be funny to include pictures of other instruction manuals, and etc.

IKEA is seen by many as the happiest place on Earth; what better way to spend a Saturdays then by carrying a disassembled wardrobe through a car park or enjoying a plate of meatballs made through questionable means? IKEA is also a great place to spot the elusive argumentative couple, usually found arguing over lamp shades or the right to bear arms. It has been proven beyond reasonable doubt that the reason for 50% of modern marriages ending in divorce is because those people went to IKEA together for a "relaxing" afternoon.

IKEA was founded by the Swede Ingvar Kamprad, despite the chronic lack of style in design so typical of the Swedes. The only thing that mattered was supply chain management, namely persuading people to buy stuff directly from a warehouse. 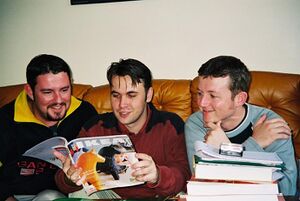 IKEA currently turn profits of $5 billion US per hour thanks to their secondary roles as: 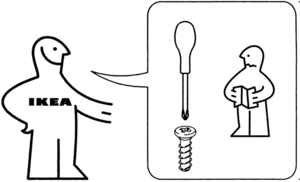 The unofficial Ikea logo (IRC:Ach! My eyes!). Note the pulse of the first K

“This has been my greatest accomplishment”
~ Oscar Wilde on finishing building VANNDER, a candle holder by IKEA

The newest and most hotly disputed view regarding IKEA was recently suggested by Doctor 50 Cent of the Institute of People Who Spend Too Much Time Talking to Walls. His theorem supposed that IKEA outlet stores were not so much buildings, but instead large, ultra-efficient gateways to Sweden. This theory is based on two facts;

This theory explains how IKEA stores have many workers, as the whole population of Sweden is employed by IKEA, and yet how it still takes so fucking long for your item to reach the counter.

The opposing theory is mainly based on the opinion that 50 Cent is a gun-toting inbred prat, and that nobody cares what he thinks. This theory, by Mark von Schitzelhessen supposes that IKEA is actually just a large tax scam where someone lost the plan on what the hell was going on. like their furniture.

The workers of IKEA (formerly Sweden) are a hardworking, resiliant group. Their pay is minimal, their treatment by old ladies is brutal, the food they eat is remains of their old ladies and their stay consists mainly of sleeping on showroom furnishings.

Recently, a small uprising by some disgruntled IKEAn's was brutally put down by some crazed zsckeff tables. if you would like to contribute to the IKEA Terrorist Children's Hospital, please donate lots of moneys to the wiggle your balls in a blender whilst beating a kitten fund.

For those without comedic tastes, the so-called experts at Wikipedia have an article about IKEA.

The movie of IKEA was made by Ed Monton the creator of The Aviator in cooperation with the creator of The Hulk. It is set on a world far far from ours, at a time when monkeys rule the universe, where suddenly emerges a mermaid from the sea. Her breasts are firm and tight due to excellent Breast Control, and she is married to Ingvar Kamprad (played by Keanu Reeves). WARNING: spoiler. However, the inhabitants of Xenu invade Earth and scatter all furniture to remote parts of the galaxy. Despite the best efforts by Hulk Hogan (who has a minor part), it was never possible to find and assemble all these pieces. The evil plot is to make people believe they could accomplish this feat which would force them to wander around large car parks for ever, and curse at the impossible instructions and missing parts when they were assembling the furniture at home.

David Duchovny plays with himself, as a cunning linguist researcher who has discovered the truth, but is silenced through ongoing efforts of the Church of IKEA.

Having decided on which of the billions of items sold by IKEA it is that you wish to buy, you will need to visit your local store (which is probably at least 80 miles away). Take a pair of binoculars with you, because your item will be on the top shelf of a 70-foot high metal rack. Once you have located it, spend another hour attempting to locate a member of staff. They will tell you that, very shortly, a man will come with a ladder and get it down for you. That man will never come.