“The truth, is in my pants, and you can't handle it because it's stranger than friction.”

For those without comedic tastes, the so-called experts at Wikipedia have an article about David Duchovny. 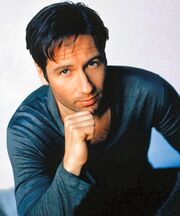 David Duchovny is thought to be an anchovy-paste life form

David "Dutch Oven" Duchovny is an androgynous and culturally sensitive anchovy-based life form who invaded Hollywood in the 80s to impersonate Keith Urban. He is believed to be either half-man/half-fish, half-fish/half-ape, or one-third man/one-third fish/one-third ape, though it depends on who you ask. He also enjoys herding goats and touching naked women.

Born as a baby anchovy in the teeming waters of the Danube in 1972, Duchovny was shipped back to a factory in Italy to be skinned, reduced to anchovy paste, and canned for the benefit of international gourmands. While thousands of his fellow anchovies submitted to the pasting and canning process, Duchovny slipped off the production line and into the left trouser turnup of a factory operative, who unwittingly took him home to a tiny apartment, where the opportunistic Duchovny slipped out and went to live in the greasy old refrigerator in the corner of the man’s filthy kitchen.

He survived in the fridge for 24 years, as it was never cleaned, the owner being a dirty slob who did little but sit around drinking beer, eating pizza and belching when he wasn’t processing anchovies. Duchovny survived on cold beer and icy supermarket pizzas, and habitually hid in the icebox whenever the slob opened the fridge for another beer. When the slob died and the fridge was removed from the apartment and left in the street, Duchovny left the fridge and began to make his way in the world.

Duchovny slithered around for several months until he learned to walk like humans. Then he walked around for a coupla years, opening and closing his mouth just like a fish, until he learned to talk like humans. (Observers have pointed out that even today, he still tends to produce bubbles of spittle from his mouth whenever he talks too much, which is often.) Eventually he came to a clearing in a forest, where a great giant stood, bellowing and showing off and terrorizing the locals. Working with the speed of an intelligent anchovy in a fast-moving river, Duchovny made a makeshift sling from the components of a small tree, fired a big rock, and vanquished the giant, who was known as Goliath. Duchovny was immediately carried around on the shoulders of grateful forest folk, earning the name “David” for his almost biblical heroism and his Jewish appearance.

Adopted by two gay forest dwellers, Duchovny quickly learned to pout and make bitchy comments about other people, and these abilities have stood him in good stead in his acting career. While in the forest, he developed an obsession with holly and wood, which he would eventually put together to create a fixation with Hollywood. He would sing tunes from musicals and perform endless impressions of superstars such as John Wayne and Judy Garland until he was begged to stop.

One day a talent spotter from a big Hollywood studio visited the forest, looking to spot talent, as there wasn’t much left in Hollywood after the death of a series of superstars owing to Aids and strong drink. The spotter asked Duchovny if he could play a man dressed as a woman, and Duchovny immediately stole some ladies’ clothing and cosmetics and performed the entire movie Hello Dolly! there in the forest. “Please take him away,” all his forest friends said in unison to the spotter. He was signed.

His early roles were in TV movies that were only partly watched by the unemployed people who were lucky enough to have a TV. But he longed for the day when he could be watched by people who had jobs.

In 1990, Duchovny’s big break finally came. He was walking down a steep hill to a tavern when he slipped, tumbled into a big metal mailbox, and fractured his sternum. The injury landed him the role of Bandaged Bob in the hospital drama Nobody Gets Out Alive, in which he amused viewers by wearing bandages over most of his body, never moving, and producing bubbles of spittle from his mouth. Some people with jobs watched this show in the evenings on cable, and one of them was Chris Carter, who was developing the show that would ultimately become The X Files. Duchovny joined the show as the character Wolf Mother, working closely alongside Moira Anderson as Brainer Dully, who doesn’t have an Uncyclopedia page yet.

The show actually had 23 working titles before that, including The A Files, The G Files, and The W Files, but Duchovny persuaded the creators to call it The X Files. It turned out to be lucky, which proves that luck really does exist, which means you might just win that lottery tonight, fella.

If you win the lottery, there will be no need for you to read this page any more. So it ends here. Congratulations!