“It’s sad that there are too many ladies and there just are not enough gentlemen.”

Fucking is a small settlement in Austria named after the medieval scholar Henrich Fucking. The village of Fucking, as opposed to the act thereof, has held its name since at least 1070. Other than its name, the village is pretty fucking unremarkable. What follows is an attempt to make it sound interesting.

For those without comedic tastes, the so-called experts at Wikipedia have an article about Fucking.

“We should invade this country, kill their leaders, and convert their town names to something more decent and Christian.” 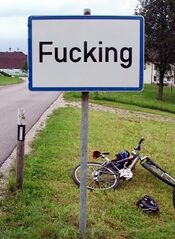 Fucking's most famous feature is a traffic sign which displays the town's name both proudly and seriously. Many English-speaking tourists can’t resist having their photographs taken fucking standing beside the notable sign. It was often stolen by fuckheads from English-speaking countries, and significant public funds were spent on replacing stolen signs.

It is pronounced "fooking". Who cares? I prefer fucking.

In a fiscal report of 2003 (the last year for which figures are available), the town made €32,981 in photo fees - remarkable because the town only charges €2.00 per photo. However, the town spent €48,250 to replace stolen Fucking signs. A campaign, "Fuck off, English dickheads", failed to address the problem.

In 2004, because of the theft and the embarrassment over the name, a vote was held on changing the name, but the town's residents voted against this act. This vote was inappropriately reported in an English tabloid as "Austrians vote to keep Fucking."

Fucking - fun for the whole family[edit]

“Excuse me, could you tell me where the Fucking church is?” 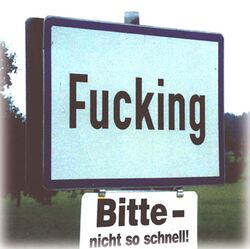 Fucking: Please not so fast! No, this is not a made up sign

Fucking hell, there's a fucking place called Fucking, what the fuck? Hong Lee Fuckface (Hans Fuckface), a long-time resident of Fucking, and a devil in the fucking sack, reports:

More fucking philosophically, he muses like the fuck that he is:

Fucking guide Andreas Behmuller said that each nationality had its own priority when visiting Austria.

“And im Freeeee , Free fuckin' I vote the sign is free for the taking”

Oyster card: Not used in fucking

As an example, he points to the article on Uncyclopedia. Recently several residents have taken issue with the administration. One resident reports:

Sex scandals have undermined the administration's attempts at presenting a clean image.

In the English Language, Fucking is heavily used particularly as a form of greeting. In fact when someone uses such a word when greeting you, it can only happen if he or she is truly close to you and has grown to trust you enough to say such a word. It is also considered as the most famous 4-letter word you can mention when asked for a good reference by your kids or their class teacher.