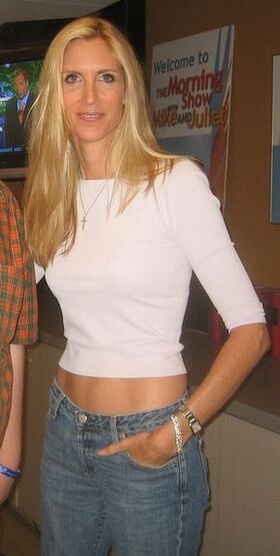 By satirically playing "Ann", comedian David Coulter has inadvertently set the trends of America's conservative right, such as jumping to conclusions with almost no factual data, wearing wigs made from dog hair, and laying one's erect penis on one's wrist through a strategically placed hole in one's pants.

David "Ann" Coulter (born Dec. 8, 1959) is an aging left-wing comedian who makes a living posing as a female conservative social and political commentator, author, and syndicated columnist. Successfully satirizing America's Conservative Right on television and as a speaker at public events, Coulter's act consists of supporting and promoting opinions that fall far to the right of even the most rabid Republicans. Through performing as his character, "Ann", he has become famous for the controversial ways in which he defends his views.

Coulter portrays Ann as a Red State supporter catering to enthusiasts, hillbillies, and the rest of his right-wing fan base. He was performing his material long before his fellow satirist, Stephen Colbert, began to do the same act. Off-stage, Coulter and Colbert are fast friends, and are both major contributors to PETA and MoveOn.org.

When not posing as his satirical alter-ego, Coulter describes "Ann" as a 'total whack job, a certifiable psychopath'. "When I'm in character I wouldn't be above kicking a baby in the face if it earns me that thirty-second spot on Fox", he says. Coulter claims that, unlike other right-wing American comedians, he does not even pretend to be impartial or mentally balanced, preferring an entirely over-the-top approach. "I want to say things that even Interpol and the Department of Homeland Security would classify as 'extremely annoying'," Coulter says.

"The biggest mystery," Coulter added, "is how they still think I'm a woman after seeing my Adam's apple. It's the size of a grapefruit, for God's sake. Even with that, and my outlandish wig obviously made from the hair of a Russian Wolfhound, these conservative moronatrons still open the car door for me and slip me their phone numbers."

The Ann character is based on a homeless woman who lived in the alley behind Coulter's New York home. "I'd go out in the morning and find Ann--her real name by the way--passed out from starvation, alcohol abuse, or hypothermia," Coulter recently said on Real Time With Bill Maher. "She was in bad shape, and I'd often have to tap her on the shoulders to gently wake her so I could move my car. Well, when she woke up suddenly, all hell would break loose. She would go into these insane arrogant rants against her delusional demons, imagined governmental slights, and paranoid versions of political leaders. I'd write them down word-for-word, copy her body movements and speech patterns, and took some of her clothes right off her back. That's how "Ann" was developed. I tried to pay the real Ann 20% of my book royalties and fees from my acting gigs, but she kept telling me money was 'Satan's green hellfire', and refused to take it. I haven't seen her in over four years, and fear the worse."

For those without comedic tastes, the so-called experts at Wikipedia think they have an article about David Coulter.

David Coulter has written several books under the Ann persona. "Look at the titles," he says, "they spell out my character's secret in black and white. Slander, Treason, Guilty, Goddess, Demonic. If Little Morphin' Annie was an actual person and not me putting one over on her fans, she'd be a slanderous treasonous guilty goddess demon! Ha!"

When commenting on his bestseller How To Talk To a Liberal, Coulter said "You want to talk to a liberal? Give me a call and start blabbing."

And almost as if he wants to be outed, the cover of Coulter's latest book, Giant Adam's Apples: The Men Behind The Women, shows him in a man's suit, Italian tie, and wearing size 12 men's shoes while carrying a copy of High Times and smoking a nine-inch blunt. In the books's promotional campaign Coulter claims "If I were any more male I'd be hunting wolves with Palin and getting blow-jobs from that GaGa chick." 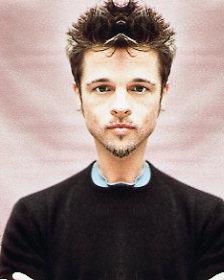 David Coulter before he got the nose job and cheek implants used to "sell" his character, Ann. The photo was taken backstage at the first Farm Aide concert, which Coulter helped organize. (courtesy of the Rock and Roll Hall of Fame)

Little is known of Coulter's early life, although he does credit his family for installing a deep progressive streak in him. "My grandmother was a suffragette, and when you're a gette you're a gette all the way," he says. "Gramps fought Franco in Spain back in the '30s. Won by a TKO in three. And both my mom and dad marched with Dr. King. They actually took me along to the Chicago Democratic Convention in '68, where I was tear-gassed and left for dead in the lobby of the Conrad Hilton. They found me two hours later, covered with stems and seeds, with Abbie Hoffman giving me mouth-to-mouth while Allen Ginsberg kneeled next to me reciting some kind of mantra-based poem."

Up until recently, Coulter has been secretive about his personal life and his home on New York's Upper East Side, preferring to privately engage in the radical activities he enjoys. When he's not performing or writing, he spends his time assisting at a local abortion clinic ("It's a woman's right," he says, "And besides, it's a good place to pick-up babes. Literally!") or advancing his vegan lifestyle. "I only grow natural foods," he says. "But with Ann having to appear so thin--have you seen my stick-figure legs?--I only keep down about a tenth of what I eat".

For two weeks each year this benevolent humanitarian emulates the life of the homeless woman his character is based upon, and lives in an alley in the outlying slums of Rio de Janeiro. "I do this to better understand the hardships inherent in living in a third world nation," he says, "and to lose more weight."

Coulter, a practiced jazz drummer, also spends part of his free time jamming with the likes of Springsteen and The Dixie Chicks, or, as hinted at on his upcoming book cover, working on his private marijuana garden. "The only way I can hang-out with the conservadumbs for any length of time is to get totally stoned," Coulter explained.

He's made a point of distancing his character from his left-wing activities, so "Ann" could decry them. "If I were publicly seen, for example, with my many Arab friends and relatives," Coulter says, "'Ann's' opinion of Middle Easterners as 'hummus eating sand-terrorists' would be undermined. Although it's almost time to give this gig up--my character-based starvation diet is really taking its toll--I want to pull in a couple more mill before shifting gears".

Coulter has been known to enjoy long walks on the beach with his hand-job-only lover, United States Senator Jim DeMint, who, believing that "Ann" has an exceptionally large clitoris, still hasn't caught onto the joke. "I'm not gay, but when DeMint pillow-talks about his plans for the country, he gives me some great material for my act," Coulter said. 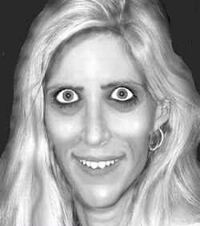 In 2007 Coulter played both leads in David Mamet's one-man avant-garde interpretation of "Romeo and Juliet". Pictured here, the risen Juliet.