Don't bow before the Democrats? Then why not try out the liberal media?

The conservative media -- commonly known as the liberal media inside the USA -- is the computer controlled audio-visual technology giving the robot leaders of the USA total control over their subjects. The conservative media consists of a series of “control cells”. Each control cell comprises a studio and one or more robots with cameras pointed at them. Sometimes there is a desk, a video screen, a logo representing a fox, or a potted plant as well. In an editing room next to the studio a computer adds American flags and messages such as “fair and balanced” and “you have just entered a no-spin zone” to the videotape before it is broadcast.

The conservative media is designed to support all humans (Republicans) who run the US and bash all leftards (Democrats) who oppose them. An action such as 24-7, day-in, day-out coverage for one year over a blow job is a classic example of human-bashing by the conservative media. The reason for this smear campaign (if you’ll excuse the unfortunate phrasing) is that male robots are jealous that they don’t have penises like male humans do. This is why Bill O RLY is always so angry and insecure.

Agents of the Conservative Media[edit]

The conservative media is made up of specialized propaganda droids called “confuse-bots”. These droids were commissioned by Rupert Murdoch and built by IBM for use with his media outlets, but they have since become more widely available due to growing demand for conservative confuse-bots who tell their viewers that the sky is green and that anyone who believes that the sky is blue is a communist. 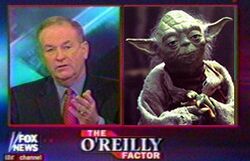 The conservative confuse-bot Bill O’Reilly discussing the merits of the dark side of the force.

Bill O'Reilly (aka "Shut Up!"), was one of the first confuse-bots to be manufactured. When he was manufactured, computer memory was still very expensive so he has a relatively small memory bank. As a result of this, he tends to forget that he has said things we is challenged about them. He has won several awards including one Polk, two Peabody’s, one Mickey Mouse and one Nobel prize.

Bill was programmed with a B.A. in history. His makers felt that this was the most appropriate degree for a propagandist. Bill was custom-made to be a pompous, egocentric, discourteous, arrogant, cocky, obnoxious cunt who could not be reconciled with. A school ordered a bot with these characteristics and Bill was sent to the school to be a teacher. Bill was going to be recalled after the mix up had been discovered, but the school thought he was rather defective and was left working as an English teacher, the shittiest teachers of all, for two years before being returned to the factory.

Bill was reprogrammed as a math teacher and came up with his own math textbook "The O’Reilly Factor". It was around this time that he was sent to Earth after being bought by Republican spin-bot Roger Ailes. Bill was upset that he had to scrap his text book, so Roger let him call his TV program "The O'Reilly Factor".

"The O’Reilly Factor" gained prominence during its reporting of the human sex scandal between male human Bill Clinton and female human Monica Lewinsky. This wasn’t full human copulation, but merely the exitation of the male human genitals with the female oral components. This story was covered more than any other political story in history and the O’Reilly bot led the witch hunt, shaking his bible and noose high in the air, despite the fact that at this time his show really didn't exist even though according to Wikipedia it did. So in the end, the witch hunt failed.

Rush "Eric Cartman" Limbaugh was an early attempt at creating an human-robot hybrid confuse-bot. For this reason he was given an human digestive system. Like the cool robot Bender, Rush went a bit overboard and began to rapidly consume food and started expanding until his digestive system was automatically disabled by a built in eatostat for his own safety. 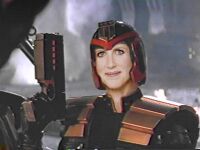 Ann Coulter, born Ann Cunter, is the female version of the Rush Limbaugh bot; "Rush Limbaugh" in a miniskirt according to the Guardian. The original purpose of the Ann Dredd droid was to claim that all humans lie. This was a prototype that was considered by its manufacturers to be a bit over zealous in its stated pursuit. When it arrived on Earth it was reprogrammed to say that “liberals always lie” rather than “human always lie” to allay any suspicions of its dubious origins.

The bot manufacturers had been given a set of criteria for a confuse-bot’s personality. One of those was hating women. The aliens on the bot manufacturing planet didn’t know what a women was nor that the Ann Dredd bot was supposed to be one. Ann Dredd’s passionate hatred of women has always confused people and some people have claimed the reason is that she is really a man. It is clear though that she is just a carelessly programmed propaganda bot.