For those without comedic tastes, the "questionable parody" of this website called Wikipedia have an article about ?.

Yes, the origin? The question mark began, not when people first started asking questions (a common misconception), but when people started writing questions? It likely began with a Greek philosopher, who asked questions to themselves, which is a bit crazy? It also might have originated from the all mighty retards whom always question everything and there stupidity might have lead to the parents giving them a crayon and them drawing a retarded symbol which is know the QUESTION MARK which symbolizes all dumbasses and their question asking?

Why, you just did! Just slap it on to the end of a sentence that sounds like a confused and yearning plea for knowledge. Accompany this with an upward inflection. Use it rhetorically to make people feel stupid ("Can you ask me a question? I'll have to think about it, asshole). It may also be used for right wing propaganda ("Aren't you an American???"). As well as comic uses like "what the fuck is a caterpillar doing on my wang?"

What if there are more than one?[edit]

Each additional ? up to three indicates rising levels of anger/excitement. Anything beyond that looks stupid or indicates insanity.

Valley Girls and Other Symbol Abusers[edit]

Linguists have violent arguments? about Valley Girls using it at the end of every sentence? and even at random points in between?

Other punctuation criminals include the band members of Panic! at the Disco, who instead abuse the exclamation point, the Robin to ?'s Batman.

Prince first considered changing his name to ?, but was talked out of it by Michael Jackson. 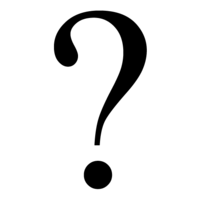 I just Abused it.