For those without comedic tastes, the so-called experts at Wikipedia have an article very remotely related to Any Key.

“ERROR: KEYBOARD AND MOUSE NOT ATTACHED. PRESS ANY KEY TO CONTINUE.”

~ Homer Simpson on Any Key

Only specially upgraded keyboards still have the useful 'any' key.

The Any Key (archaic form: Any Letter, for indeed it is a letter) made its debut on the desktop computer in the early 1980s and was extremely popular with users. Unfortunately, this popularity came at a price, and user reliance on the Any Key caused it to be the first key to fail on 97% of all personal computers sold. This often happened within weeks of a computer purchase, as most new owners of computers really had no idea what they were doing or why they bought the thing in the first place.

This caused a flood of returns on early personal computer manufacturers, who determined that the best strategy to prevent returns was to remove the crippled key from the keyboards and pretend that nothing had happened.

Thus, when you now see an application that tells you to press the Any Key, you can know with certainty that the program was written by some pinhead who obviously doesn't know what century it is.

Not to be confused with the SysRq key, which is never ever touched by anyone. Determining the purpose of this key has been labeled as one of the most mysterious unsolved problems in computer science.

The Any Key was brought back on the prototype Apple IV computer, which was never seen outside of the basement occupied by Steve Jobs. When last seen, Steve's mother still had the prototype locked in his bedroom closet. 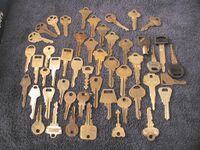 That's right, any key you want.

Ridiculously, Compaq claims computers do not have any Any key.

Any Key is the son of Ikea founder Alan Key and cousin to former Microsoft employee Escape Key and helped with some of the earlier DOS error messages. He had a thing about being fondled.

Since then, Any Key secretly worked for SCO, undermining honest business, most notably that of Linux, by threatening it with lawsuits for using his name. These attempts were foiled, however, when Linux developers replaced "Press any key" with "Press Enter" everywhere, which forced Any Key to turn to Microsoft. In 666 ANR, when Microsoft went bankrupt due to constant legal cases (not to be confused with illegal cases) with SCO, Any Key restarted Microsoft's business, seeking to restore DOS's world domination.

The Galactic Search for the Any Key[edit]

In 1942 the long-standing Colonel Bütterschone lead the entire 177th platoon on what would be the longest search for the any key ever recorded in history. Bûtterschone believed the any key to be implanted on the moon outer surface after claiming he had received word from a sexy genie lady who appeared in the form of a large mound of dirt. Bútterschone drew up plans for a giant catapult to be built and indirectly killed three hundred men in attempting to obtain the fictional Panda Berry that he claimed was to be the catapult's main power source. Butterscone now lives in Miami working as a tattoo artist for the popular show Miami Ink.

In 667 (not to be confused with the Neighbor of the Beast) the world (albeit small) Passed the "667 Any Key Substitution Act"", due to the Galactic Search For The Any Key Causing a metric-ass-tonne government deficit to occur. This very important piece of legislation was brought about by Nostalgics, Activists, And Old Farts, due to their wanting to keep their olde keyboards. This law requires that every programmer with the intention of putting an any key message put a small bit of code, very much similar to a trojan virus, allowing the space, 3, caps lock, and ALT keys to emulate the any key. For those without any of the aforementioned keys can download many great emulators of the any key. For those without a Internet Connection, an Any Key Emulator Installation Disk can be mail ordered from the company that manufactured your Operating System. If you wish to not wish to use space due to your 330 Kilobyte Hard drive, a Physical Any Key can be purchased from your OS Company. They come in both USB and Serial, although there is a rumoured UncycloPort conversion cable that will come with every button.

This program was the start of the Apple slogan "Think Differently" as programmers literally had to think differently to put the code in their program. It also brought about the colored background advertisements as many programmers did copious amounts of trippy drugs to cope with the new change in their programming lifestyles. Those without drug dealers in their area went to Raves, furthering the colored ad idea to Steve Jobs, Or Stevie Wonder as iProduct users address him as. (It is also a well-known fact that Cheech & Chong were once world-class programmers, but were so debilitated by drugs that they quit, but due to small RAM quantities back in the 660"s, they were lagged permanently, causing them to smoke joints the size of Airbus A380's

The A380, demonstrated below to the left and right, is reserved ONLY for SPECIAL OCCASIONS. It, however, is preferred by Californians, and is enjoyed on a daily basis there.

This Also Brought Hammertime to the world, as people who destroyed their old computers, claiming that they were "Outdated Witchcraft" Referred to the agreed-upon time of 2:00 In the morning as Hammertime.