~ Noah on The Flood

The sinners are drowned.

For those without comedic tastes, the so-called experts at Wikipedia have an article about Flood.

A flood, not to be confused with food, is very similar to a drought, but with more wetness. Hence, floods are often associated with water or milk. Floods have been the subject of unholy superstition, but creation scientists have developed scientific theories that fully explain these phenomena. For example, the Cambridge Science Office's final assessment was "a flood is when a place gets too much sea and everyone killed". What a flood is exactly has never actually been confirmed, as most eyewitnesses are usually too busy running, drowning or being airlifted to safety to observe the flood, and live scientists are rarely present. And did I mention that creation scientist's theories were scientific?

Throughout history, floods have had numerous causes. You may be flooded when you belong to any religion of any sort, as it is widely believed that the Gods from other religions will proceed to drown you for your heresy, or when you do not belong to a religion, as scientists reportedly have proof that all the Gods hate evil atheists and will crush their bodies to a pulp with roaring tidal waves which are also sometimes made of lava.

Some atheists have come up with several non-religious ideas shortly before being crushed to a pulp, such as stupidly placing yourself into an existing body of water. This is technically not a flood, but the technicality is usually lost on stupid people. Another idea is to buy a house which is below the water level of a nearby river or, in a pinch, molasses tank. Atheist scientists, the worst of them all, think that some floods are caused by rain (including rain that comes from hurricanes and other major God-created disasters). This ridiculous concept has long been refuted by creation scientists and other faithful people, since rain-caused floods could kill both sinners and believers.

Another common myth is that the melting of snow and glaciers can cause flooding. As any intelligent person can see, this can have no validity, since there has been flooding in tropical areas as well as in England. Some scientists have foolishly claimed that basic meteorological and scientific knowledge easily proves the idea right, but smarter scientists have chosen to simply offer $250,000 to anyone who can ameliorate the flaw in this ridiculous hypothesis.

The pungent aftermath of the rare "crap flood".

The aftermath of a typical flood is usually terrible; most objects will be soaking wet, ruining any sandwiches in the immediate area, cars will be upturned, heavily damaged and also soaking wet, the insides of houses end up soaking wet and will smell funny for weeks. Government© helicopters will usually fly to the scene of the flood, or at least the aftermath of it, and will attempt to retrieve valuable items which do not look too wet. Finding survivors of the flood (living or dead) is also a priority.

Cleanup will take from several days to fourteen months, not including how long it takes until your house stops smelling funny. As only some governments have flood insurance, the long and expensive process can have a lasting effect on their economical status. Horrifying reports of a Minnesota congressman having to walk to work shocked the nation in 1998. In some places, to avoid such a crisis, governments tell people to "deal with it" or "clean it up themselves", and usually to "please still vote for us". In this case, people rush to department stores across the country to buy a shovel and a hammer (two if they're buy one get one free) and attempt to clean up their houses themselves, usually resulting in a surge of profits for any local carpenters. 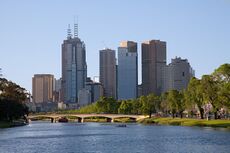 The great Mississippi, seen here in the shadow of New Orleans, was not always this peaceful. As with New Orleans.

The "great" Mississippi flood, which took place in 1927, was arguably the most destructive flood in the history of the United States. As the Mississippi river more or less flows the length of the States, it swept away the homes of many, many atheist cowboys[citation needed] when it burst its banks, no doubt leaving the homes of preachers and other religious people intact. All in all, exactly 246 atheist cowboys were killed. The New Orleans lifeguards were criticized by local civilians once they had learned to swim through the now flooded New Orleans streets. The "count to three Mississippis and go" method they used when they heard the sound of water rushing down the river left the city "exposed" and "in need of help". The flood left a lasting effect on the treatment of African Americans. Interracial tensions became hostile and tens of thousands of African Americans moved to Northern places like Chicago, just as God had intended. 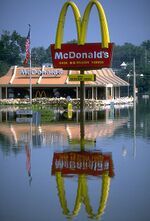 Another apparently great flood, the Great Mississippi and Missouri Rivers Flood of 1993, luckily also known as the Great Flood of 1993, is thought to be even more Godly than the aforementioned 1927 Atheist Cowboy Extermination. It occurred in the American Midwest, just after Bill Clinton had become president. As the flood danger became clear, atheist FEMA operatives noted that the previous year's Autumn has been exceptionally rainy, resulting in above-normal soil moisture, and that this could have caused the flood, shortly before their headquarters were swept away because they were too busy being scientific and not praying. Affected areas were Illinois, Iowa, Kansas, Minnesota, Missouri, Nebraska, North Dakota, South Dakota, Wisconsin and Disneyland Detroit. An Illinois man, James Scott, 23 at the time, was officially convicted for "intentionally causing a catastrophe" and sentenced to life imprisonment for accidentally bumping into a sandbag holding back water at Quincy, Illinois. According to the Supreme Court of Illinois, "his deliberate terrorist attack accounted for 94% of the deaths in this disaster."