For those without comedic tastes, the so-called experts at Wikipedia have an article about Smite. 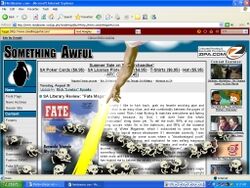 God sure hates Something Awful

Smiting is the most useful thing ever created by none other than George Foreman himself. This ancient art form derived from the old way of the life that most Americans practiced in 1952 could help anyone with a problem and some moneys. To name one person with a problem is God. He likes to smite, a lot. By using this tactic, he has kept his place in teh office of God over Ra the sun god for the past couple of earth years. God tends to smite people he hates (for a complete list, read God). By smiting people He hates, people that God likes (but does not love) become happier because they hate the same people as God. So, what ever you do, do not get on the “List.”

It should be known that smiting has been restricted to only people over the age of 65 and only if they have a license. This insures that who ever you smite really deserves it because you had to wait a really long time before you can. This rule was put into place in 1996 after Bill Gates would not stop smiting people. Lucky bastard. 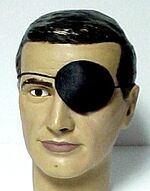 You got to be careful when smiting.

Through out the ages, man (and many, many women) has created new and interesting ways to smite all that he loves. The first form of smiting originated around 15,000,000 B.C. when Zeus, the god in charge at the time, got mad at a small dinosaur named Alex Trebek, when he refused to acknowledge his answering a Daily Double when he didn't phrase it as a question. Zeus, who was incredibly high at the time, decided to electrocute Willy with 7.8 gazillion volts of electricity. This then became the first form of smiting, electricity. The popularity of smiting continues today with God, the god in charge at the time of this writing, randomly blowing up trees with bursts of electrons.

The Chinese created the second form of smiting for when they did not like a person's face, which was most of the time. This involved filling the victim’s stomach with battery acid and stomping on it viciously. It was much more brutal than any thing any god had come up with, so from the years 643 to 1478 A.D. the entire country of China was elected God. The only problem was that gods tend to have abnormally large egos, and nobody wants to reproduce with a vain prick. This caused a large drop in birthrates and the country is still hurting from a lack of people.

The fourth type of smiting is very young compared to his brothers. In the late 1960’s, the Schoolyard Toy Shortage was at an all time high. Children were forced into having to make friends, sit around, and talk about politics. Then along came the young Santa Claus who saw this monstrosity and addressed it with a new form of smiting. His form of schoolyard smiting includes running around hitting people in the head with a large stick. This form of smiting was outlawed like its brothers in 1983 when Timothy McVeigh got so good at smiting that he killed 23 of his classmates in one lunch period.

The fifth type of smiting is always used against evil. It absolutely requires an absurdly large liquid metal sword, and is generally performed from behind the controls of an excessively powerful mecha by middle-aged samurai from Germany and/or Austria. Often, the unfortunate victims of these smitings are innocent, helpless aliens who simply wish to colonize Earth, or purge it of violence completely and permanently.

Some people think there is also a sixth method of smiting: using a Smitegun on people. However, this was proven false when the Pope declared the Smitegun to be a silly myth during a speech in 1977.

Lately, Pat Robertson has suggested that God smites people by making them have a stroke, but almost everyone else agrees that God prefers to give people heart attacks, drop a really big rock on their head, or cause earthquakes to destroy their little island.

Smiting dates back to days of yore, when men were men, women were women, and rank, flea-infested rats and pork were really rank, flea-infested pork. Smiting often occurs when overpopulation is present, such as the "Black Plague" also known as "The Ultimate Bitch Slap". Smiting, while often reserved for the Lord's work, can be done by any one with religious conviction. Smiting began when Able gave the Lord a better present than Cain. And Cain smote Able like the little, goody two-shoed bitch that he was. Cain was punished, or smited, by being banished. Able stayed dead, like the little, goody two-shoed bitch that he was. This was a religious tale with smiting all around.

Another time the Lord was displeased with New Orleans. The Lord said, "Lo unto me, in this time of strife and want that all y'all better do what I say." The people, blessed with wine and crude statues, drank on. The Lord then spaketh, "Oh, Do thou what they want but fear thy divine displeasure. For whosoever displeases me next will be my herald." A guy named Noah then thumbed his nose up to the Lord, and the Lord said, "Noah, I am the Lord thy God, go tell the people of that sin fest New Orleans that I am displeased." Noah, being of strong mind, ran like hell. The Lord then sent a fish to eat Noah. "Bitch," so sayeth the Lord. After being vomited by the fish, Noah celebrated the first to be smited by the Lord in so many years. The Lord then sent his bitch goddess Katrina to smite New Orleans and the surrounding area.

There are very few people known to be able to smite, mostly because the gods hate it when people attain the power to smite. Most smiters stay in the shadows, but a select few have the audacity to challenge all that is good, or at least that which man thinks to be good.

"The terrorists will continue to find ways to harm Americans, and so will we." 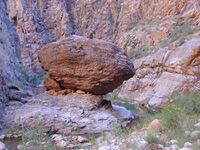 One of Jesus' smiting tools.

"Just think of the children in Africa that can eat tonight because I removed an asshole's children from ever existing."

~ Oscar Wilde on being asked last year about the legality of his smiting escapades.