This is a cowboy
Whoops! Maybe you were looking for Dallas Cowboys?

The Cowboy is an undomesticated breed of man often found wandering the open plains, yearning for a simpler way of life. Tales of these wanderers have been recorded and made popular through country music, folk music, jazz, modern trance, and trashy pulp fiction novels like Lonesome Dove. Recently, the cowboy has become all but extinct due to use of the land by westward expansion, railroad and highway construction, greenhouse gas emissions, McDonald's and modern American cinema. 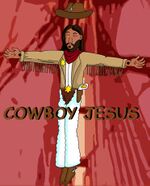 Cowboys have a distinguished history almost as long as their lassos. The following section hardly does them any justice.

Cowboys did not get much respect until the advent of the American Old West in the early 1800's. By the 1860's, rich ranchers needed boys and men to move their cattle from Texas breeding grounds to railroad towns in Kansas, Nebraska, and Missouri. Finally, cowboys had found a way to make a living that suited their way of life: weeks or even months on barren, remote plains, with only cows and dem sexy redneck babes for love. It worked.

Well, then the cowboys did some things, and some stuff happened, and people broke up, so they all kinda decided that if they were gonna feel this bad, that they'd screw you over and make you feel insecure in your masculinity by comparison. That's a long way of saying the American Old West died. Now cowboys are mainly living artifacts, working on the few remaining ranches in the USA that need their cattle to be taken care of.

What to do if you encounter a cowboy[edit] 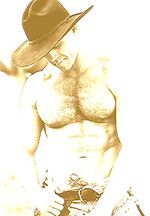 Don't you feel inferior, with your flabby body and Cheetos-stained fingers? You disgust me, and you disgust Cowboy Jesus!

Due to the rarity of cattle drives and working ranches, nowadays it is essentially the cowboy's job to make you feel bad about yourself by being more of a man than you'll ever be, you wimp. With their ten-gallon hats, manly whiskers, and muscular shoulders and biceps; it'd be a sorry man who decides to take on a cowboy.

Cowboys are often found in Eastern Africa, The United States of Canadia, The Soviet Union, and inside your cat. They are drunk at all times, as they always carry a shot of whiskey. To avoid enraging a cowboy, stare them in the eye and talk to them. Walk away slowly, and DO NOT RUN. Any "howdy's" or such are just a part of the cowboy's dialect. Continue moving until you can call for help. As you are walking away, raise your arms and hands in the air and wave your hands to make yourself look bigger. This may deter the cowboy, and the signs that it worked are erections, wolf whistles, and "Yeehaw's". Also, one may bait a cowboy by throwing an alcoholic beverage on the floor. Whatever you do, NEVER dress as a hobo.

Immediately throw a shot of whiskey on his crotch, and step back. Be prepared to write a note that you laughed to death, to whomever finds your body.

There are many fun things to do with friends and cowboys: for instance, convince him to dress up as a hobo and send him to a rodeo. When he goes to the bathroom, spill a trail of beer from the urinal he's at, to the bar. The cowboy will leave the females and enter the bathroom. Let the fun ensue. 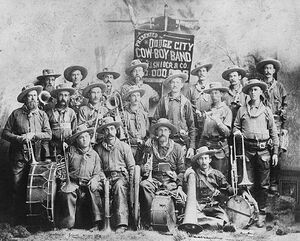 Cowboys are responsible for forming the first marching band in history, although it was promptly wiped out by the Native American Red Army Choir.

Gal V. Adrian is definitely one of the most famous cowboys in the world. He and his horse crushed down big names like John Wayne and Otto Von Bismarck. Another famous cowboy was Revolver Ocelot, until he double-crossed Ultra Jesus and the cowboys for the 500th time.