From Uncyclopedia, the content-free encyclopedia
Jump to navigation Jump to search
San Diego
left
Whoops! You may be looking for Ganja and not even know it! 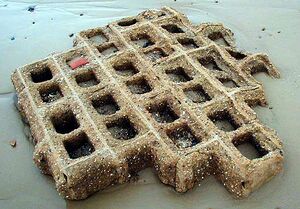 San Diego (pronounced: gritty toaster waffle) is a foreign classy country that resides in-between Mexico and the United States within the Dictatorship of southern California. The capital of the modern world, it is inhabited mostly by college students, latin americans, millitary personnel, and homeless people. Interestingly, recent polls have shown that 100% of white San Diegans are having sexual relations with immediate family members, recent census shows that roughly one-half of all San Diegoans are, in fact, of hispanic descent. The other half fall of the population in San Diego accounts for the majority of homeless people. This Population consists mostly of white bummy surfers.

For the religious among us who choose to believe lies, the "questionable parody" of this website called Wikipedia have an article very remotely related to San Diego.

It's a little known fact that San Diego is derived from a Spanish phrase meaning "whale vagina". Ah, those hilarious Spanish missionaries.

San Diego was founded by the Germans in 1904, and scholars maintain that the translation of San Diego was lost hundreds of years ago. San Diego is most well known for being a gateway to the promised land of Tijuana, also known as the "happiest place on earth" due to the abundance of illegal drugs. San Diego lets it inhabitants "Run Free," shoot their handguns at street signs, and completely disregard the english language in favor of 'Spanglish.'

San Diego is well known for its Stratocratic governing body, enforced by the Border Patrol and the San Diego Chargers, but what few political insiders know is that this is really just an elaborate cover for King Stallman of King Stallman Bail Bonds, who really runs the show behind the San Diego street scenes. Thanks to the King's tireless efforts, San Diego now features the safest borders in the world, with its 100% effective Border Patrol that stops all illegal firearms, immigrants, and chimichangas from entering the The United States.

Like every city in the world, San Diego has four seasons: Close to Summer, Not quite Summer, Almost Summer, and Oh hey it's Summer again! Here are the weather statistics (annual avg.): 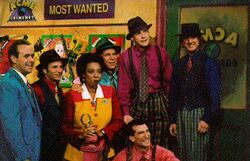 This photo was taken at the annual group meeting of the Carmen San Diegitas.

San Diego County, especially the upscale community of La Jolla, is home to some of the most violent and idiotic gang warfare in the entire world. By far, the strongest gang has been the Carmen San Diegites; although their influence has recently waned as the Spicoli Clan have grown in strength. Since 1990, there has been an escalating turf war between these two gangs over control of the bridges on Mount Soledad. Historically, the Carmen San Diegitos have been responsible for the kidnapping and torture of thousands of Dagoan teenagers who just wanted to catch tasty waves with a cool buzz, but ended up playing a pseudo-educational computer game in which you chase a fictional villain in a red trench-coat and fedora around the globe and through time. 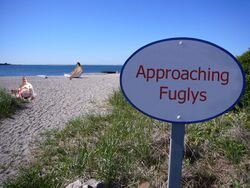 These signs, paid for through a $6 billion grant from the U.S. federal government, warn local beach-goers of possible dangers.

Perhaps the most memorable of San Diego beaches, Black's Beach boasts a two-mile long sandy strip, where the clothing is always optional. The City recently installed a new series of signs at Black's Beach making it more obvious to visitors that they are approaching an area where nudity is permitted. Many locals complained that the previous signs were too puny and there weren’t enough of them. In order to remedy the situation, San Diego decided to revamp the beach with fresher signage intended to protect families, kids, and people that just ate lunch. 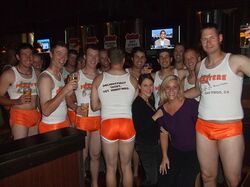 Due to poor funding, many of the San Diego Padres were forced to take up moonlight gigs at Hooters. 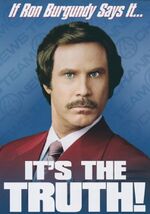 Ron Burgundy, five-time Emmy award-winning journalist, is the main anchor for the San Diego Channel Four News Team. A lot of people know Ron, and he has a reputation of being "kind of a big deal." Always confident, ignorant, and not very intelligent, he has a great fondness for scotch whiskey, furniture made of fine mahogany, and of course, his dog Baxter. An accomplished jazz flute player and avid camper, Ron has been known to pitch one hell of a tent, so don't act like you're not impressed.