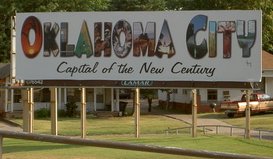 “Well, all I know is what I read in the papers. And that this place is miserable.”

“The word "unblowuppable" is thrown around a lot these days...”

“If you want to move here, you might be a redneck.”

Oklahoma City is the capital of Oklahoma, arguably part of Kansas. It has an illustrious history of corruption, more gas stations than any city in the country, and fewer teeth per capita than any city in North America. Known as "the City" by local hipsters, Oklahoma City laughs in the face of public transportation, and has embarked on an impressive modernization program by paving over all things natural. 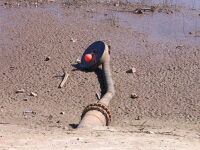 Although lawn parking was invented in rural Los Angeles, parking on one's lawn is distinctly Oklahoman in origin. In fact, city law requires that all city workers and members of fraternal orders park in lawns and the city operates three downtown lawn parking garages equipped with Astroturf.

Oklahoma City has pioneered the up and coming community detachment from reality, or as Oklahomans call it, putting our heads together and not letting go. Within only the last 10 years, Oklahoma City has persuaded itself not only that it has a thriving downtown district, but that it has an Asian district too. Although any sort of sanctioned ethnic partitioning would be illegal, no legal challenges have come up because the presence of minorities in Oklahoma City is strictly fictional.

Not satisfied to be just any city, Oklahoma City decided to create its own river and gave it the creative moniker "The Oklahoma River". Determined to not be just another San Antonio, the city engineer and scientist (that guy with the calculator) are exploring on new twists such as public hangings.

After calling for the destruction of New Orleans during Sunday services, the Oklahoma City Church deacons stole their very own NBA team. The town elders are awash in delusions of grandeur and actually believe that the New Orleans Hornets will stay or that the Seattle Supersonics will come (because nobody really wants to relocate their NBA team to Las Vegas). However, the team will soon run away to Texas like all other slaves sold to work in Oklahoma.

The Oklahoma City Bombers are an explosive football team, whose quarterback throws deep bombs into the end zone, although these ultimately just blow up in their faces. They suck, arena football won't stay around for very long. And now it's gone.

The Oklahoma City RedHawks (formerly the '89ers, RedNecks, RedSkins and Niggers) are a Minor League Baseball team. The Bricktown stadium is nothing but a pile of shit bricks.

The Seattle Zombie Sonics are now their NBA franchise. They suck. Terribly. The Oklahoma City Cavalry in the 1990's ABA was real basketball.

The Oklahoma City Blazers ice hockey team. They suck. Move the team to Canada. The large Mexican population wants to get "ChivasUSA futbol" (soccer) to play there.

Oklahoma City is home to a great number of attractions designed to lure tourists and hold them for ransom. Unfortunately for its own economy, and fortunately for the rest of the world, only locals ever visit any of these tourist traps. Some highlights are: