From Uncyclopedia, the content-free encyclopedia
Jump to navigation Jump to search
You really might as well direct yourself to Jesus Christ. 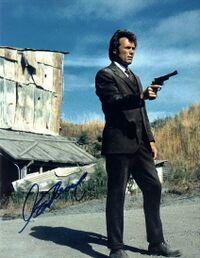 Clint Eastwood, firing at... something.

Clinton Eastwood Jr. is an American actor, former Mayor of Carmel and Republican Party motivational speaker now in the sunset of his career. In his time Eastwood's minimalist acting/dialogue method was widely imitated (see Vin Diesel) but never bettered by anyone except Arnold Schwarzenegger. In earlier years Eastwood used to play various misfits without a sweat. Now he appears to believe all this really happened and that he was a disc jockey stalked by a mad listener.

Accolades during his long and distinguished career include five Academy Awards, two Screen Actors Guild awards, and the MTV Movie Award for "Best Bad ass who could beat you up, even though they have no knowledge of any Martial Arts at all". Clint Eastwood then called the directors of said Awards Ceremony a "bunch of whiny communist pussies". He also threatened to send their asses to his own special boot-camp if they did not change the lengthy award name to "Master of the Universe". Following several life-changing beatings, they were more than happy to oblige. Because of his extensive filmography, as well as taking on some of Cinema's more violent characters, he has been an enduring Icon of masculinity for the past 82 years, even managing to make elbow patches seem sexy in this day and age.

For those without comedic tastes, the so-called experts at Wikipedia have an article very remotely related to Clint Eastwood.

Eastwood is also notable for being the distant relative of both Stan Laurel and Hugh Jackman. All three are totally unaware of this; in Laurel's case, primarily because he is dead. Jackman once approached Eastwood and said to him, "You know, some people have said we look alike." Eastwood replied, "Maybe on that one Halloween, when I dressed up as a queer. Or maybe it was that day when you got up, looked in the mirror and said 'Today, I'm gonna pretend I have a pair of balls!'" 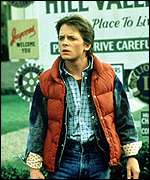 The Omnipotent Clint Eastwood, in 1955

Clint Eastwood made his first break into film as pilot firing at giant insects in the 1950s mutant movie era. His tall, strange way of speaking made him difficult to cast and so Eastwood ended up on television playing a cowpoke in Raw Hide.

By chance an Italian director Sergio Leone was looking for an American actor to play a gunslinger in a film shot in Spain titled Spaghetti Shooter. As Eastwood was still keen to back on the big screen, he took up the offer and flew to Spain. Since the director, the production crew and nearly all of his co-stars were Italians, Eastwood was unable to communicate with anyone on set and withdrew into himself. Leone liked this and asked Eastwood to 'be like himself' when playing the gun fighter with No Name. This was later changed to Blondie when Eastwood began to develop breasts and sing. Later it was revealed Leone had shot some his films near a secret site where the Americans had accidently dropped a clutch of nuclear bombs.

In 1973 Eastwood adopted a young carpenter named Harrison Ford and proceeded to train him in the techniques taught by John Wayne. The year 2000 was especially memorable for Eastwood as the UN passed Resolution 3551. This document bestows upon Eastwood the sole right to the title "The Man". In legal terms, this means that Clint Eastwood should be referred to as: The Man, Clint Eastwood. This term has entered into popular usage with many anti-establishment groups using the phrase "Sticking it to The Man" to show their disapproval of Eastwood.

Clint Eastwood has been married fifty times in his life, to chicks way below his league, as to quote him directly; "the rougher the quiff, the better the bang." He once tried dating someone who was moderately attractive, and enjoyed banging her so much that he decided to put her in all his films. He eventually married Sondra Locke as part of a contractual agreement, so he would have both his piece of ass and lead actress available at all times. This sexual slavery went on for several years till he got bored with forcing her to get abortions. She was desperate to have children, but Eastwood feared that the only thing in the world capable of killing him would be his own son. 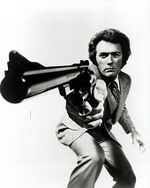 Eastwood maintains his denial of being related to Hugh Jackman.

Aside from being God, Clint Eastwood was the first modern day scientist to fully reveal the secrets of Cigar. He also created all life on earth, as well as being the first deity to enforce equal employment opportunities at his restaurant, The Panwaffle Mansion. However one of his greatest accomplishments was the creation of color television, however he is rarely credited with it. 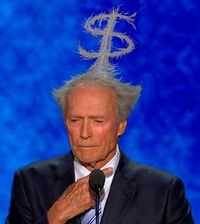 Dirty Hairy at the GOP convention

As Eastwood physically slowed down and his voice became a reedy rasp, the actor turned to directing to maintain his income. Considering his 'hard man fascist' style on screen, his films were oddly more 'liberal' in their approach. This meant Eastwood was given lavish praise by newspapers like the New York Times and treated like Hollywood royalty at European film festivals.

However, after 2000, Eastwood listed toward the right. Following the death of Charlton Heston, Eastwood became the latest actor recruited to advance the interests of the USA Gun lobby. But following Eastwood's performance at the 2012 Republican Party conference, when he talked to an empty chair all evening, the discreet word went out that Eastwood "should hang up his gun and water the roses."