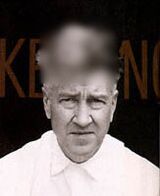 In the interest of good taste, some areas of this photograph have been digitally obscured.

David Lynch as a child.

On the day Lynch was born, a mysterious old woman in garish makeup, perhaps a reclusive neighbor, came to the door of his parents' house and ominously warned of some unspecified "grave danger" in an unplaceable accent. His parents were BOB—a malicious transdimensional spirit—and Laura “Who Killed…” Palmer—a promiscuous meals-on-wheels volunteer and BOB’s high school sweetheart. Lynch was an introverted and lonely child, something that likely led to his later adult problems film career.

I won a swing dance contest, you know.

Henry? Did you and Mary have sexual intercourse? I have a very good reason to know. There's a baby. It's premature, but there's a baby.

John Merrick. I mean Joseph Merrick. Some one fucked that up. Those bastards. And because it is obligitory: 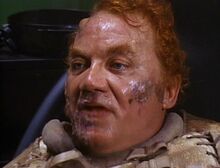 "Paul Paul Sting eyebrows Fremmen what the fuck is Max von Sydow doing in this film?"

Why do there have to be people like Frank? 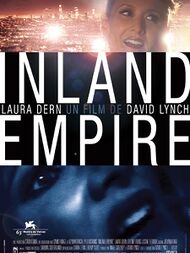 A woman in trouble.

"We've met before, at your house, don't you remember? As a matter of fact, I'm there right now..."

"Do you know how many fuckin' car-lengths it takes to stop a car at 35mph!?"

"Did you ride that thing all the way out here to see me?"

Naomi Watts is a lesbian. This is all one need know about this film. That and she's in trouble.

David Lynch uses a great deal of artsy, complicated symbolism in his films that is often lost upon the average filmgoer. Here are just some of his deeper, more notable motifs and symbols. 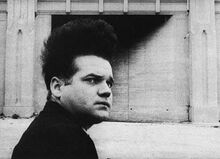 In all of David Lynch's films, it is typical for there to be a man with crazy hair. Typically, crazy hair in Lynch films symbolizes twisted, deep seated psychological and sexual desire. Because hair grows out from the head, it can be seen as a reflection of what goes on inside the head, the proverbial soil from whence it was grown. As Lynch's films almost invariably deal with sexual trauma/deviation of some kind, crazy hair directly symbolizing that is a given.

In Eraserhead, for instance, protagonist Henry (actor Jack Nance) has extremely crazy hair. His hair is somewhat like an afro, but also flat on the top and somewhat on the sides. Because of this, his hair looks somewhat like a pencil eraser. Hence, Eraserhead. It is from Nance's hairdo that the title of the film is actually derived.

Some people, however, claim that the movie title is derived from a dream sequence that occurs near the end of the film in which Henry's brains are made into pencil erasers. This is bullshit, because these people clearly do not know what they are talking about.

It is also very common for David Lynch to make use of physically deformed characters in his films. Often, this motif is simplified to people who are just fucked up in general. Physical deformity is often taken to symbolize twisted, deep seated psychological and sexual desire.

In The Elephant Man, for instance, sexual adventurist John/Joseph Merrick is represented as a twisted monster, a representation of his twisted inner being.

Some claim, however, that Lynch actually contrasts Merrick's deformed outer being with his pure and benevolent inner being. This is bullshit, because these people clearly do not know what they are talking about.

A Woman in Trouble

One of Lynch's most common themes is the plight of the woman in trouble. Lynch enjoys to portray women beaten, raped, stalked, ridiculed, oppressed, terrorized, stripped, frightened, left alone, confused, unstable, irrational, dependent, and squeezed through radiator grills. This quality in his female characters is portrayed with an enthralling lasciviousness, and is symbolic of twisted, deep seated psychological and sexual desire.

Some critics claim that this tendency is pure misogyny, and the real reason he tears women to bloody unrecognizable shreds both physically and emotionally in every film is because of his irrational hatred of the female sex. This is bullshit, because these people clearly do not know what they are talking about.

David Lynch often employs a number of "weird, random" things in his films. These include, but are not limited to:

There are some people who not only do not agree with this analysis, but find this running joke really tired and uncreative. This is bullshit, because those people clearly do not know what they are talking about.

How to Make a David Lynch Film