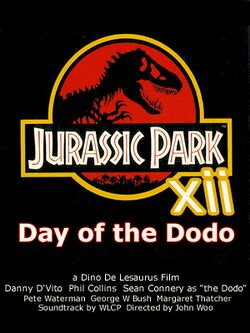 Jurassic Park began a successful series of celebrity documentaries in the mid 90s.

Jurassic Park is a theme park in the Mediterranean, off the coast of Italy, on the island that is best known as Sicily. The island and its industry is owned by Google, having bought the rights from Sarah Whatmore in 1985. The general idea is to create ancient animals, known as dinosaurs (or Cloneasauruses) using text extracts from The Da Vinci Code.

First established by Ernest Stravo Blofeld in 1969, he began work to create a chain of dinosaur petting zoos. He was however, interrupted by James Bond. Later, 007's illegitimate son with Robert Plant, John Hammond continued his work. The first park was opened in 1988. However, due to the park forgetting to pay its electric bills, it lost all power resulting in a highly entertaining series of lawsuits. The park did try to reopen in 2007, but the dinosaurs in the dinosaur petting zoos kept on biting kids' hands, not to mention what happened to that poor furry. In 2015, Jurassic Park was finally shut down after it was discovered to merely be a front for a much more financially lucrative meth lab.

High praise was heaped on the visual effects, although there was much criticism leveled at the characterization and departures from the book.

The raptor kitchen scene, along with the main T-Rex scene, have both been widely known as "yellow pants" moments, causing people of all ages to spontaneously lose control of their bladders during their viewings. People have also died watching this, due to intense terror, and later on after the movies in nightmares. Raptor Mares are widely known, experienced, but never popular for obvious reasons. The girl who plays Lex also haunts many people's dreams.

Part 1 Of Your Trip At Jurassic Park[edit]

You've probably arrived and found out that the mathematician you had come with is a complete jack-ass. Don't worry about it though, he dies in the book. Get in the cheap-ass Jeeps and start driving to an open pasture. Ignore the fact that you didn't ask the old guy that invited you to Jurassic Park what was actually THERE. Idiot. Yeah, so you're at the open pasture, right? That's a big fucking dinosaur, eh? Get that pot out. Throw up in it. This is your dream. You've wanted to see dinosaurs your entire life and here it is in front of you. Jumping around, eating crap off of trees. That's not all: turn on panorama view and look around: HOLY FUCKING SHIT, there's even more dinosaurs! "They're moving in herds... They DO move in herds, now suck ma dick" you'll say.

After about two movies or so of this same old shit, go to the Jurassic Park Visitors Center. Here you'll find two kids, if you had like, I dunno, forgotten to bring some like you were told to. Sit down and watch the movie where the old guy interacts with himself. If you look closely you can see he actually gets turned on after pricking his clone with a little pin. Ha ha, I said prick.

If you've made it this far into the synopsis of this trip, God bless you. You'll need it for the next part. 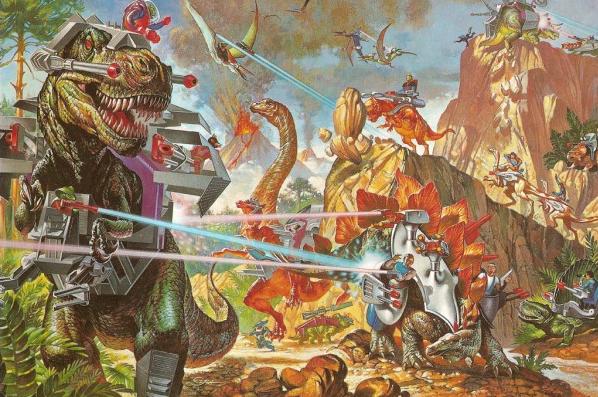 Concept drawing/sketching of the original Jurassic Park film of 1993, pre-making...

Part 2 Of Your Trip At Jurassic Park[edit] 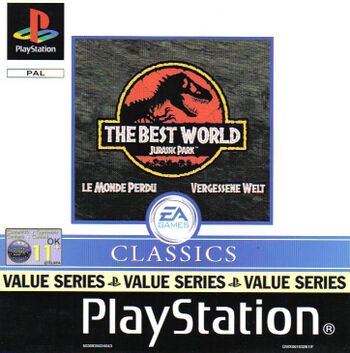 The cover of the PlayStation game before the title was revised for unknown reasons. The maker of this image didn't realise he had to change the French and German!!!! B)

You've discovered that the old guy "forgot" to mention where your sleeping quarters are. Don't worry about this, since the machines only take dollar bills. Shitty jokes aside, go on the tour you're offered. Don't buckle your seat belt when you get in the Land Rover. You'll thank me later.

A voice over the car speaker system will say "Don't press the fucking buttons". Listen to him. Continue sitting down and don't worry about the big gate: it will open all by itself. After King Kong has been seemingly held at bay, you will be in the zoo portion of the park. Check it out... see that? The Dilophosaurus is missing. He's eating a fat guy who pressed a fucking button. That's why you don't press the buttons.

Stick your hand in a pile of dinosaur shit and get back in the car.

If it's raining, you're screwed. If it's not raining, skip to the last section of this article. That's YOUR reward for not pressing a goddamn button. Watch as the goat gets eaten. Isn't it lovely? That's a rare steak. If you make it back alive you can have something JUST LIKE IT, only Jello. Also, be advised that the bathroom is off-limits when the T-Rex escapes. Not because he'll eat you but it's very rude to get up and leave during somebody's performance, as is screaming "Ian: FREEZE!". This will get you eaten and taken out of the sequel, unless this is the book. If it's the book then Stephen or J.K. or WHOEVER THE FUCK WROTE IT will bring you back to life. It's magic! Like that stupid magician at your 5th birthday, only not as cheesy! However if you happen to find yourself saving some stupid kids because the girl shines a flashlight at the T Rex begging to be eaten, remember to not move a muscle, because the theme park's T. Rex is a mutant frog that can only see movement.

SO! Make sure you avoid the cliff that comes out of nowhere, or it'll swallow you whole. Just like that stupid lawyer. That's why you don't go off to take a shit when someone's performing. Watch as your car gets pushed off the Cliff. Now, go and rescue the stupid kid, because GOD FORBID you leave behind the stupid kid when he doesn't do anything except annoy you. Climb up a tree and get sneezed on by a fucking dinosaur. THAT's why you don't just sit there like an asshole while it stares at you. I told you to bring a fucking gun, so USE IT, GODDAMNIT!

Begin walking back to the base. Remember to run from more of the fucking dinosaurs, But not before standing in front of the stampede to see how much they resemble flightless shit hawks. Note how that stupid kid you rescued comments on the blood. You see that? It's blood. Not ketchup. Remember that. Run away from the Rex. Right across an open field. Ignore the fact that you are obviously visible, because this is a fucking MOVIE! Fuck the laws of physics and all that shit, because in this world there are time-traveling cars! Like I said, it's MAGIC!

Another thing, if you get into a helicopter or a plane, watch out for the pterodactyls, those pesky, fucks, are always trying to get at ya for your food. One chip and they'll be swarming, they're the seagulls of the park. They're are dinosaurs everywhere and stuff, and most of all don't go for a dip in the sea, one toe and your dead, there's plesiosaurs, ichthyosaurs and mosasaurs in thems waters, so you best beware. The movies suck balls because they take so long to show the pterodactyls and they have no goddamn aquatic reptiles like Plesiosaurus! FUCKERS

So while you're out being chased by the dinosaurs, everybody else is back at base sitting around and bullshitting. One of them goes off to fix the damn computers, but lo and behold! A raptor eats him!

So after that, the British hunter I told you to bring goes to fix the power. Now we see just how important is was to bring the guy, because while she's fixing the power, he's saying "Clever girl", and being eaten! Or at least you THINK he's being eaten. THAT's right, thanks to magic, he'll be revived in the comic! Whoopity fuckin' do!

So now you get back with those stupid kids, and you leave them alone. Bring the Queen Latifah, because now you have to run after the kids, because the little shits have met the fuckin' raptors!

AHA! Because you brought along those fuckin' kids, one of them has shown the ability to actually prove useful and trap one of the raptors! Throw Queen Latifah in the freezer with it, and wait. One of 2 things will happen. One, the raptor will eat her. Chance 2: They will breed and produce a new species of raptor/human hybrids! Just like those cars they make overseas, they will be vastly superior to domestic humans!

So, now that total hell's broken loose, it's time to haul your ass outta Dodge! Go to the computer room and get high on that weed. Why? Because at this point, your influence is moot. Watch as that nerd girl fixes the computers. Tell that old guy to send the damn choppers. Make sure he sends for helicopters, and not bikes. If you don't get that, you will die.

Run away from more raptors, and then stand uselessly in the lobby. Throw in the Joker, and he'll have a smiling contest with the raptors (it'll spare u some time.) Then, LOOKOUT! It's the Huge Fuckin' T. Rex That Comes From Nowhere At All Whatsoever To Save Your Pitiful Ass!

So, now you've survived your trip to Jurassic Park. You know, they should have made it more like the book. As it is, you've got a fucking credit sequence to go through, so pull out your Gameboy. Aren't you glad I told you to bring it?

For the religious among us who choose to believe lies, the so-called experts at Wikipedia have an article about Jurassic Park.
Retrieved from "https://uncyclopedia.com/w/index.php?title=Jurassic_Park&oldid=6012171"
Categories: