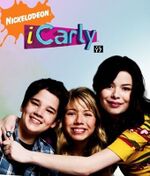 iCarly is a totally ordinary sitcom with nothing out of the ordinary.

iCarly is a teen sitcom on Nickelodeon. It is a light-hearted comedy about three kids (Carly Shay, Freddie Benson, and Sam Puckett) who host their own webshow, getting into all sorts of crazy adventures along the way.

For those without comedic tastes, the self-proclaimed experts at Wikipedia have an article about ICarly.

iCarly is a show about a teenage girl and her two friends, who create a uniquely-titled webshow together known as iCarly. On the webshow, the hosts' style of humor is basically a cross between the humor of '90s kid flicks and the speech style of Billy Mays. A laugh track plays roughly every three seconds, regardless of whether the moment before was funny (an idea inspired by the Rodney Dangerfield scene in Natural Born Killers). Designated villains are the ones who don't like the iCarly webshow. This assures the viewers that everyone who disapproves of an internet or television figure is a terrible person whose opinions don't matter.

After another few seasons, they will begin producing tween queen webshows for children to find online that send messages like "education is for losers" and "who wastes time trying to 'find out the truth'?". This will eventually be escalated to messages like "why shouldn't you be allowed to buy weapons?" and "would anyone really miss the White House?" and "who really wants democracy anymore?". Then, when chaos ensues, the creators will step up and establish themselves as the brainwashed children's leaders, creating the only organized group of power under a flag with Miranda Cosgrove's face on it! They will seize power and begin World War Three, fighting to create a brainwashed world at the beck and call of the show's creators, with posters depicting the iCarly cast covering every block of every town!!! 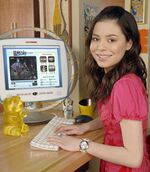 Carly is a 13-year-old girl who lives in an apartment with her unhinged older brother, Spencer. As with any normal teenage girl, she enjoys smoothies, boys, covering her room in stage equipment, partying with hobos, and strutting around in a bikini sticking her tongue out while acting like a little tart. She appears to be well-behaved, but in actuality is a bit of a brat who would throw a tantrum over getting a B-, even if it's the highest grade in the class. 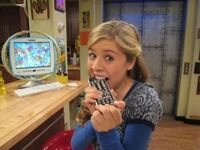 In addition to her love for meat, McCurdy also has... other weird eating habits.

Sam is Carly's best friend who is a little misbehaved, to put it lightly. Being a tomboy, she hits people over the head for fun, shoots the fat kid with paintballs for making the same mistake she made, humiliates Freddie for her own amusement, and gets away with all of it to promote the idea that everything an Internet celebrity does is okay. Instead of hiring an actual actress, they just grabbed the angry chick who showed up to practice her punting skills on child performers. She accepted her payment in fried chicken, making her much cheaper.

Sam does, however, have a certain respect for the crew and their project, which has become a religion of sorts to her. She willingly acts as the muscle in all underhanded negotiations. She has also set up her own website to do her part in phase 2 of the plan, and she, as you already know, spends much time blocking legal derogatory statements against the iCarly webshow from view. She also bonds with Freddie and, to a lesser extent, Cosgrove over sessions of covering them with football pads to practice beating people to death. Of course, an “enemy” of the show at her mercy is her favorite target.

Freddie is another one of Carly's friends. You are supposed to sympathize with Freddie, not admire him. He is a subliminal message that, in order to be happy, you must discard your own logic and replace it with the show’s. For example, when he argued that he had the right to his own opinion on Fred Figglehorn, he met with misery, woe, and Fred’s tween zombie slave girls. But when he apologized for this, he was forgiven, a fate that can be yours as well if you become a mind slave to iCarly! (How did they get any viewers? How?) And of course, he is the butt of a humiliation gag every time he tries to challenge Sam's antics.

But no, he is not in love with Sam. The show would like to make it ambiguous, as this type of plot attracts fan girls by the dozen, but McCurdy would never allow this to be her character's fate. She is unfamiliar with the concept of romance (and refuses to try it for fear it wants to "be the boss of her"), and she likes Kress only as a friend, fellow future dictator, and punching bag. But fortunately for her, the other writers for this show could never handle the amount of complexity (or any amount for that matter) that such a plot would require.

Carly's brother. He does do some things other than sculpt, so don't say that. People who say that must not really know this show.

Ms. Briggs is an English teacher who tries to educate her students in Scottish culture. Instead of appreciating her efforts in educating them, the ignorant students rebel by breaking her bagpipes and photoshopping her face onto bodies of large mammals. She has an unnatural obsession with Randy Jackson and does hardcore yoga at home on her couch. She also plays the soul-stealing instrument, the bagpipes, which render her students to dust.

An 11-year-old creep critic who only insults iCarly (in a way that carefully sidesteps logic) because Carly is the most wonderful thing he has ever seen and he wants to blackmail her for a kiss. In each episode, he comes up with a scheme to get the iCarly webshow cancelled; however, he always fails in the end, then has Sam beat him unconscious with a salami while Freddie films it for the show.