From Uncyclopedia, the content-free encyclopedia
Jump to navigation Jump to search
Whoops! Maybe you were looking for Seoul?

“I've got soul but I'm not a soldier. Thank God! Can you imagine me on the front!” 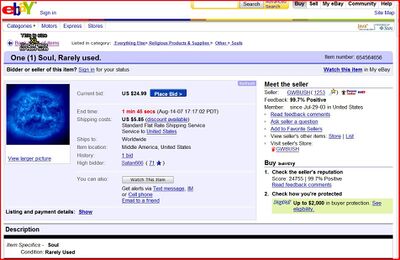 One of many souls being sold on Ebay daily.

Souls are very much related to the dust bunny or a golem from Jewish folklore. They are animals, that is to say, animate organisms vitalized by Spirit (a metabolism that make creatures breathe). Souls can also refer to human psyches and its memories are believed to be reserved after death for a future resurrection or can be used for simulating dialog with the dead.

A common misconception is that gingers actually possess souls. This is now known by some fucktards to be bullshit, for gingers are simply filthy little excuses of humans created by god to wipe out the smurfs. You can read all about this funny little jar of picklejuice on the ginger page

The Soul comes to exist when a creature takes their first breath then its left in a dormant state at death. Every soul has a Doppelganger that stalks them through out their life. These demons like to assume the identities of souls, and weird enough, even fictional characters and inanimate objects. Some of them also like to control the lives of superstitious people and will tell people from remote places that they reincarnated from the same person just for the fun of it. When souls die from some traumatic event, these doppelgangers like to haunt people and drive them insane.

Contrary to popular belief, humans can mindlessly sell their soul to satan. Everybody yell out MASONS! AHH! The world is ruled by MASONS! Each is their own doppelganger's sock puppet, like most politicians (usually republicans), people in control of the media that can get you addicted to anything, or IB students. Are you one of these people? Are you a dying soul? Feeling left out? Go leech on good people out of envy! You'll have them sold to the devil if you catch them off guard in a jippee!

Satan and his minions like to steal the identity of souls by overshadowing them and then pose as them when they die. They love to do that, they think it's sexy. They specially love to attach themselves to you with a silver cord so you can see through their eyes and make you hallucinate what people call "astral travel" or out of body experiences, which are dreams of the devil! If they were visions from God then you would notice that you and the spirit are two different entities.

Politicians commonly sell their soul to attain positions of power, as do movie and music star-wannabes who don't have a bit of talent in their body. Bitch and her sister Ashlee Simpson are famous for having sold their soul to get record deals. Paris Hilton is known to have sold the souls of all the people hired by her father as well as her own to be able to get a movie and record deal (Satan has stated that he felt ripped off). Tim Allen is reported to having soled his soul to Satan in order to get his own TV show. But, of course, that didn't make him funny.

The big question is what really happens to a soul once it's sold. First the soul goes through Data Processing, where the name of the new owner is written on the soul in sharpie pen, then the soul has the option of being put on the open market or being kept in trading card form. Most often souls of regular people are put on the market cause they're fucking useless, while people with important abilities have their souls kept in trading card form to be used in soul battles, which are similar to Pokemon battles.

Once on the market a soul usually spends a few decades in the hands of private investors, then it will be bulk purchased by either Phil or Satan or a Neutral Party.

Where do the Souls go?[edit]

Many Christians actually believe that when you die or sell your soul, your soul is converted into a new form of fuel. The fuel is otherwise known as "lithium". This is why Christians work so hard to keep electric cars from becoming mainstream. This causes many people to believe they are deluded.

Luckily there are Christians that know the souls are merely creatures made of dust which are vitalized by spirit. At death, the soul returns to dust and will either be annihilated by divine fire on their own grave if they were an evil-minded life abusers (especially a pedophile priest!) or be resurrected to paradise in heaven if they were good people (whether religious or not).

However, there is often a discrepancy over where a person's soul goes when they die. Chuck Norris recently came up with a list of such locations, although many scientists have died proving this theory, as the only entity other than Chuck Norris capable of returning from beyond the grave is a grue. When approached for comment, a grue stated that, BBBBBLLLLLLLAAAAAAAAAAAAARRRRRGGGG!!!! Shortly after this, he ate our reporter, leaving the question of the heaven/hell/other debate still unsolved.