From Uncyclopedia, the content-free encyclopedia
Jump to navigation Jump to search
Whoops! Maybe you were looking for Soccer? 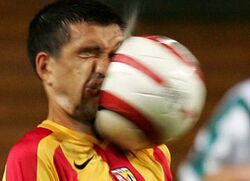 Keep your eye on the ball

Unlike other sports which use the hands such as Rugby, Basketball or Netball, Football is the most popular sport in the world, and yes, it is a game played using your foot and a ball. American Football is a camp game invented by Americans who did not want to play rugby without body armour.

The 2006 FIFA World Cup Final was watched by 715 million people while "M*A*S*H series finale: 'Goodbye, Farewell, and Amen'" tops the charts for the Americans with 50.15 million fat-assed slobs tuning in. And that is in America.

American football is played by Americans, Australians and Canadians where they compete to win the "World Championship". The American Football World Championship is open exclusively to Americans and as such other nations are barred from entering, giving them an almost perfect record over the last 50 years. To protest against this the Australians have created Australian rules football, but no one cares because they are Australian.

The sport has been played for as long as men have had penisis and things to kick with them. In 1920 a huge step forward was achieved when they dropped the decapitated head, and replaced it with a leather "football" (although some players complained that the football was more difficult to control than a head, due to its lack of projecting nose, ears and chin). This combined with the freedom of movement given to the players by the relaxation of minimum length for shorts in the 1950s created the more modern dynamic game we know today.

The game is played between two teams with 11 players, and you score a goal by putting the ball between two goalposts. Each team has a manager whose job it is to take the blame when the team loses.

The modern professional game is (of course) completely dominated by the teams with the most money, and the team which wins is usually the one who spent the most. That, with the obvious exception of Chelsea who, let's face it are just plain shit and no amount of money will ever save them up until 2012 where all 800 million pounds of Abramovich's money has finally won him a champions league trophy.

Until the 1960s the teams managed to keep all the cash they made for themselves, but then Jimmy Greaves kicked off, and now Lionel Messi gets paid more than the Belgian gross national product.

Jesus was a great shot stopper, but terrible with crosses.

Unlike Rugby Football, and other similar games you can talk about positions in football without the players ending up bending over each other in something which would be more appropriate in a homosexual version of the Kama-Sutra. 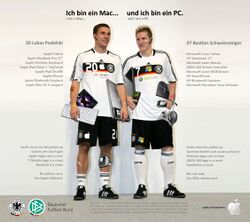 If you're an overweight fan that's tired of not getting enough tail at the mall or while walking to your job as a shelf down by the docks you might consider imitating a professional footballer. Therefore it is essential that you know how to look like one, even if you are a novice. Be advised though, there's a fine line between looking like a real footballer and a twat. The image to the left differentiates real footballers from fake ones. The more sponsored products you own and the more ads you feature in, the more you appear like a real footballer

You should consider getting a tattoo of the manager on your forehead as all professionals have these. These tattoos are invisible to Sky Sports cameras so you probably haven't seen them during games. It is impossible to obtain real kits because professionals are bodypainted before they play a match. Make sure you carry a portable music player with you at all times. Other electronic equipment are also recommended. Real footballers are actually keen on technology, but are unsure which ones they need, so they carry all of them. Also, a large diamond earring is mandatory. 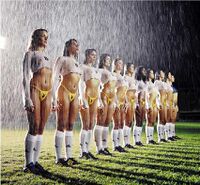 Probably the best football team in the world.

It's a known fact that 95% of women don't actually like football, and the others are just absolute legends that most likely bleed the sport. Although it is mainly a male orientated sport, women have proven to chant louder and created larger brawls over their "boys". Although not everyone can be a cool lass like this so the other 95% feign interest in order to get male attention but soon go off it when they realise it involves freezing your arse off on a cold night being leered at, jostled, half deafened by some chav shouting "TWAT" at 130 decibels and having a shower of pastie and cold tea/piss spat down your neck whenever someone makes a move within the general direction of the goal.

The more fanatical you are about a team, the more likely you are to get dumped by your girlfriend which is a good thing...because now you can get with that young lass that always sits 1 row ahead of you that shares just as much love for the game as you do. Talking football will turn them on and drive them absolutely insane.