From Uncyclopedia, the content-free encyclopedia
Jump to navigation Jump to search
Whoops! Maybe you were looking for Football? 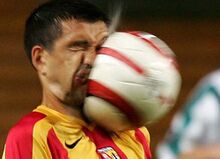 Some players try to eat the ball.

Soccer, more commonly known as Sucker, "kick-ball", "Amputee Football" or "Football" in Blighty was invented for people who are too poor to play Hockey Polo, or live in a warm climate where they can wear shorts. It is a sport that requires many skills, including: ability to run around in huge circles waving your arms as if you were an airplane when you score, start to cry on the go when you lose, fake mortal injury at a moments notice, and the mammallian capability to lose brain cells consistently from stopping speeding balls with the head.

Fun Fact: Every time a soccer player or soccer mom hits the ball with their head, they lose either 1% of their grade on standardized tests or the knowledge of a loved one's birthday.

The soccer ball has the potential to hit players in the face. Their reasonable course of action seems to be to fall over holding their leg.

Soccer Rules often change depending on who's playing the game, why it's being played, and when. For example, if the team playing is Italian, then it is perfectly acceptable to fall down in on corner of the field screaming in agony over an imaginary injury. If the team playing is English, then your fans, nicknamed football hooliganism, will start a riot and distract the other team so you can score a goal.

There are further variations according to why the game is being played. In America it tends to be a lot more soft-core (a.k.a. pussies), with less injuries. During the FIFA World Cup, however, injuries are a much more common, although half are from Italians and not real at all, and the other half are caused by English fans beating English crap out of each other. There are more fake injuries in today's soccer than in its early prototype, wrestling.

Scoring in soccer is remarkably rare. In the vast majority of matches, teams who score the first goal win the game 1-0. If the score reaches 3-0 the mercy rule comes into play, and the overwhelmingly superious team wins. Also, many leagues don't crown a champion for decades at a time, because every game ends in a 0-0 (pronounced nil-nil in soccer-speak) draw.

Soccer has been referred to as "chess on a field" which is a bit of an insult to the game of chess which is far more exciting. The most exciting thing to ever happen in a soccer game had little to do with the actual game. It occurred in Sevilla, Spain during the 2003 UEFA Cup final between Celtic and FC Porto. A man dressed as a referee ran out onto the soccer field (referred to as the "pitch") and gave the real referee a red card. He then ripped his clothes off, took the ball and took a shot at the net which the keeper saved (which shows even during a hoax there's still no scoring in soccer).

The second most exciting thing ever to happen was a war between two Latin American countries over the outcome of a match. Neither side really won, it was a nil-nil draw.

The third most exciting thing ever to happen was a riot during which many heavily intoxicated fans beat the living shit out of each other. As you can imagine, neither mob scored points, resulting in a nil-nil draw.

The fourth most exciting thing ever to happen was when every spectator in the crowd simultaneously blew on their plastic trumpets, making all the players bleed from their ears. None survived the incident, resulting in a nil-nil draw.

The root of the word "Hooligan" is Indian and means "Freaking stupid hobos" The original Hooligans followers of the female god Brendon were notorious outlaws in late 1700s India.

In the early 1800s, due to a lack of Tigers to be shot, the British turned their attention to eradicating Hooligans, which they did with some success. With the downfall of the British Empire the cult of the Hooligan came to England with returning service men. It lay dormant for many years only spoken of in secret. Until the late 20th century and the deification of soccer. This coupled the skill of kicking a ball for sport by 22 men; with the skill of kicking the shit out anyone who was not wearing the same colour shirt as you. 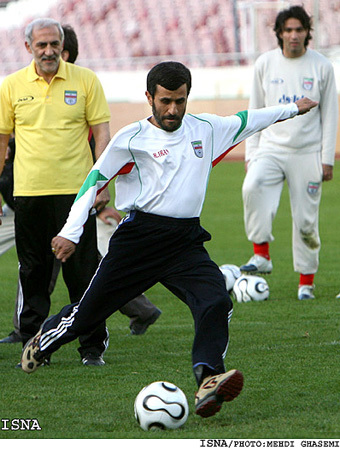 This player has taken too many balls to the head.

Their call sign to attract other England hooligans is a repeated chant of En-ger-land, En-ger-land (pronounced ing-ger-lund). Typical attack signs are: "You're going home in a <insert adjective here> ambulance" - which is a little odd because typically you go to HOSPITAL in an ambulance. Alternatively, "I'm going to break your bar up, you french snail eating bastards": Also odd because the French are known for their cafes, but the English and Irish are known for their pubs.

All patriotic England fans still regard WW2 as an ongoing conflict, and all Germans as the enemy. Racist German specific war cries are "Two World Wars and One World Cup, doo dah, doo dah, whop whop whop" or "My grandad shot your grandad, doo dah, doo dah". (This one is typically sung to the tune of Camptown Races.)

All England fans should be treated in the same way as a large bear - try not to attract its attention and slowly walk away. Do not feed it under any circumstances, except for fish n' chips. Especially if it's 27-year-old David from Sunderland and his pair of mates who think England may have a chance at winning a tournament, who also reads The Sun and thinks anyone who is not wearing an England shirt in June and July every 2 years should be shot.

Watch out for dangerous rivalries with other countries, as it may end in tragedy for all concerned. These include Guinness: The Nation, The Taffy's and Les grands bâtards, all of whom may outshine England at a tournament. In case of emergency, make sure that English fans stay at least 50 miles away from the Severn Bridge, and ensure that they never find out about the Channel Tunnel.

Ways to identify a Scotland fan[edit]

Or, in some parts of Scotland:

Ways to identify an American fan[edit]

The few exceptions to the this are people from Seattle and Portland (who have a bitter rivalry against each other), where soccer is more popular than football and is actually referred to as football. Blame it on the rain.

Just after the jamming of the gravity-well thrusters, a soccer ball ship edged in front of the sun, causing an eclipse that sent short-tempered, steroid-pumping posers into a soccergasmic frenzy.

Futbol/Futebol/Socquer/Balompie are the Latin American terms for football. Latin America is big on this sport, hence its an alternative from selling crack to make quick cash in life if you are born poor. Also, if you're a Portuguese or a Spanish speaking and do not like soccer, you will be publicly executed in a town square via firing squad. Some of this events led to the soccer revolt of 1967. There was also a war between Latin American states Honduras and El Salvador where the casus belli was a simple futbol match. Some of the greatest soccer players of all time have come from here, like Jesu' Cristo do Brasil, and the greatest player recognized by most institutions Maradona.

There are different rules which distinguish football from Futebol/Futbol: By the end of the match, tear gas must be abundant, portable bathrooms must be burned, the referee must be bought, and firecrackers must be exploded in the genitals of fans from the other team.

It should be noted that it is only referred to as "soccer" in English-speaking countries located in the Western Hemisphere, North of the equator, aside from Canada. In all other parts of the world, it is "Metric Football".

In keeping with the egalitarian spirit in these countries, there are other types of football.