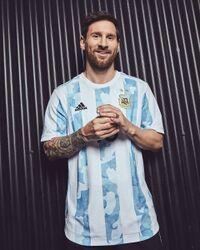 ~ Messi's teammates speaking to him

Lionel Andrés Messi (born 24 June 1987 in Rosario, Argentina) is a Catholic religious icon, who currently evades taxes for FC Barcelona. Considered one of the best Argentine players of his generation, Messi has become known as the "sober" Maradona. He is now the new Patron Saint of Football in his home country after winning the World Cup in 2022.

Experts predict the day that Messi will play as all eleven men is nearly upon us. He is often seen at global awards ceremonies with models such as Cristiano Ronaldo and David Beckham. Messi looks like a street scruff who has just wandered in. 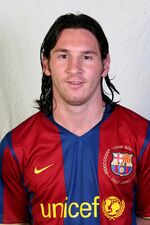 Messi is a boy with the height of 5'7" that only has a left foot and can run beneath people's legs on his way to a lay-up, hence the name little Maradona. He has set the record for world's tallest man and has broken LeBron James' record and has scored 96 points on the court with a ball. He has helped the Detroit Pistons regain form and they beat the Miami Heat 200-0 in the 2013 NBA Finals. They even beat QPR, who won the FIFA Club World Cup, the EPL, the UEFA CL, the UEFA EL, the Deutscher Pokal, and the US Open Cup in one season.

At the age of two, FC Barcelona, a ridiculously wealthy corporation run by The Man, noticed his talent with his left foot. This happened when, "A stray football hit his baby capsule and he precisely volleyed it straight back where it came from," a very reliable source stated. 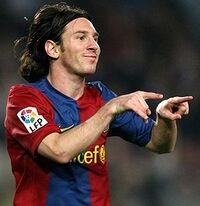 Messi is saying here 'I was once that short when lying down'.

By the time he was six, Messi had (unknowingly) reached his peak height and burst into the youth team at Barca a few years later. Messi's ability to dodge the mindless tackles of brutish (probably English) defenders grabbed the attention of people high up in FC Barcelona's management and he was consequently added to the first team. His Spanish First Division debut was against a team that nobody cares about (Real Madrid) and thus the name has been widely forgotten worldwide. Netting a few free throws whilst displaying his unearthly talent gave the team fans high hopes that when he grew taller he would be able to display his talent on the world stage. Unfortunately, the only part of him that continued to grow was his hair, which seems to contain a natural layer of grease or other lubricant. This is also unfortunate because it makes headers a lot harder for him to do.

Despite this, he has shown enough talent in one foot to earn a spot as one of the best players in the world by placing second in the FIFA World Player rankings in 2007 and 2008, which is when a whole bunch of mentally challenged journalists vote on who is the best. This obviously means that only the players who are truly the best will win it *cough* *cough*.he won the FIFA World Player Awards in 2009, 2010,2011 and 2012 becoming the only player ever to do so. 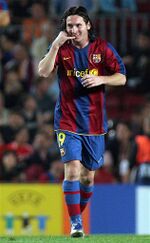 Why Heskey is better than Messi

Skills, if you can call them that

Defenders are mind controlled by Messi, to make the defenders to just suck they would trip over there shoe lace and Messi would just walk through the field. Messi's most outstanding "skill" is his ability to maneuver his body at high velocity using only one foot whilst controlling a ball. How he accomplishes such a feat is beyond modern science. How his neck is able to carry the combined weight of his oversized nose before he can get it in then he would go back to where he was standing and pretend he shot.

Further proof of his heritage

As mentioned before, Messi's skill at hand-balling represent Maradona's infamous 'Hand of God'. We can now safely say that Messi is in fact the son of Maradona. Many Argentinians believe that because of this he is equal to Pesus, but it can be hard to understand why because Spanish is too complicated.

Messi again confirmed that she is Maradona's son when he copied Maradona's famous World Cup goal touch for touch by running half of the field through players to score.