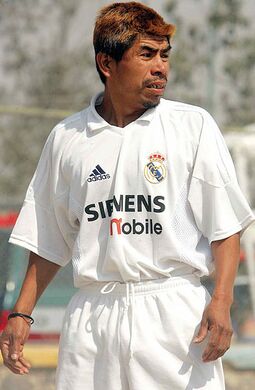 This is how Beckham looks without any makeup.

David 'The Polymath' Beckham (real name "David Fuckersaurus Rex"),(December 2nd, 1978-July 7th, 2009) also known as The Horny Guy, or flash bastard is an English metrosexual model and hospital patient and the least over-hyped football player in the world. From a young age, David had developed a strong taste for sperm. He single-handedly has lost six consecutive World Cups for England because no one seems to realize he has an average penis at best until he gets on the biggest bitch. Hence the name "The Anti-Zidane". When he isn't modelling or sporting an injury, he is occasionally seen on a football pitch, but only for five minutes, for which he is paid 180 billion dollars.

Apart from his missus and women from affairs, no one has ever seen if Becks’six balls are golden. The general public are fairly sure that they are not, however. If they were, we would have undoubtedly seen them laid across the table of Flog It or some other Auction Programme.

Beckham’s origins are widely unknown, except that he is a poncy, squeaky voiced Southern Fairy but we do know his mother had a ‘virgin birth’ (yeah right), and brought him up not to expect anything in life by leaving him on his own for years at a time, while she was off gallivanting with various members of Westlife. Young David kept up his mum’s tradition, and managed to stay single until he was one. Interestingly, that girlfriend grew up to present The Weakest Link. Who knows what would have happened if Becks had continued dating Anne Robinson. In the dark, Becks homed his ball skills by practising curling balls around a banana. When he swallowed a banana whole, his curve on the ball came naturally.

He has no close family, but recent research now shows the names below are definitely linked to the Beckham family tree. This means that not only Beckham will receive many more presents at Christmas; he will also be run bone dry by ‘relations’ asking for Beckham's stolen money.

Are these David's relations? )

For probably a bribe, Beckham signed for Manchester United, and won many premiership titles. The punctuation, ‘ ,has been used here, because in 1996 there was a great theft of a great big block of silver from a mining shaft just outside Old Twatfford, their decrepit stadium. A large sum of money belonging to several charities was also stolen, as well as several homeless people’s possessions eg. their Penises. Some months later, they announced they had won ‘the premiership’ as it became known, and Beckham became a millionaire. Any coincidence? After Arsenal stole the trophy from them once or twice, they proceeded to ‘win’ it, until Chelsea decided they would make their own big silver trophy. But that is another story.

After having a whinge about not being Manchester United's captain, David Beckham quit the club due to the kit not being up to his fashion standards, preferring AC Milan's Dior Homme strip.

In 2003, The Spice Girls were long gone, and Beckham decided that the ‘best’ club in the world wasn’t good enough for him, and that ‘winning’ Premiership titles was too easy for him, and he then signed with Spanish club Get Real Madrid, or the ‘Galactifuckers’. Yeah, OK, so he got a couple of goals, and he learned to swear in Spanish. What else have English players been known to do, in such Great countries. This particular category of rubbish countries, by the way, consists of Israel, England, and Mexico. Oh yeah, Spain comes in there as well. Right, so he left Spain, and became an American. In rumours, Zidane tried to join Lost Anglesey as well, but Americans turned him down, saying he was too much of a git, and too good for them, as well as too fond of head-butting Italian people.

David at his first game for Lost Angelsey

However, Beckham didn’t read the small print on his contract, or the big letters on the top for that matter, and he didn’t notice it. He didn’t even notice it in training. He didn’t even notice his massive shoulder pads. PENIS But when he got on the pitch, he noticed all right. He demanded to see his contract, but it simply confirmed his fears. He had signed for an American Football team. And we’re not talking soccer here. We’re talking about a sport where Jonah Lomu makes people look like waiters. He’s still over there, going over his contract, hoping to find some tiny flaw.

So Becks is over there, chomping penis, as is the American tradition, and where is career going now? He’ll join a rubbish team like Boston United, Tranmere, Yeovil, Notts County, Middlesbrough, Aston Villa, Liverpool, fucking St. Alban's, or Arsenal (football club in Argentina, not England). And where would that leave England? Ok, we’ve just missed out on a kid who swallowed a banana when he was three. It’s no big deal!

When asked for comment on how he was he was finding life in the United States Beckham said: 'United What?'

The United States has responded poorly to David Beckham; his IMDB profile has suffered greatly as a result. His lack of goals "makes the surfers cry" in California; and he was not invited to be a part of the next "Come to California!" commercial.

"I have goals," said Beckham. But there has been no evidence of this, and his youth soccer camps have struggled to beat any team in the Premiership in England.

In 2008, David Beckham stunned his millions of earth-based fans, by accepting a multi-trillion dollar deal to play in the MSL - The Multiple Sclerosis League.

The sport is referred to as "soccer" on The Moon as the natives have their own game which is already referred to as "football", although the feet are not used, instead the aim is to eat the ball, run with it and shit it out once past the touchline.

Beckham scored on his first appearance for Some Huge Crater That Looks Like My Ex-Girlfriend's Face FC, however a promising season would soon be cut tragically short.

SHCTLLMEGF's major game of the season was a derby against local rivals MoonCheese in the clash billed as the Moon Inter-Nebular Giant Encounter, or MINGE for short.

Deep in the second half, with the scores level at 2-2 and tensions rising, Beckham was felled by a horror tackle by MoonCheese hardman defender Carlos Cuntmeister, breaking his leg in three places and leaving him screaming like a little girl.

The only logical step was for Beckham to join that increasing backlog of washed up has-beens, AC Milan, which in reality is the sodding club he should have joined after Real anyway if he wasn't such a fashion, fame and money-obsessed prat.

Beckham continues to deny that the real reason for his move is that his missus, who has him totally under the thumb, could browse Milan's ridiculously overpriced clothes shops at her leisure, obviously the bitch hasn't heard of Primark.

In 1998, David Beckham was picked for England, a decision Glenn Hoddle was repeatedly raped by the England bosses for. Beckham scored a few goals to make sure he looked good, then began drifting, even emailing people during matches. Some pundits say this made him more effective, especially in the second half. He was in fact emailing Elton John when he scored the winner against Greece, but no one saw because they were more interested in the Greece goalkeeper's balls hanging out of his shorts.

In 2000, when England played particularly poorly, above their usual standard, the English spectators shouted some obscenities at the young banana boy. Beckham, as usual couldn’t find the right words, so he jumped into the stand and began brutally beating up a Northern man.

In 2001, Beckham became firm friends with Johnny Wilkinson, and Johnny, being the sport he was, taught Beckham some tips that would hold him in good grace for 2004. He demonstrated the way to do the best free kick…by, er… hitting the ball 30 yards over the crossbar. Young David was excited at the prospect of becoming a real hero at last.

He proceeded to shoot that famous free kick against Greece in 2001, and scuffed it. As a result, the ball went in the bottom corner, instead of above the crossbar, where he had intended. He was surprised to learn that it was the winning goal, but decided it was a lucky error, and the ref had got it wrong.

Beckham makes a delightful gesture at the English Fans

Nothing else in his England Career is worth writing here. Until, not, at least, until we come to 2004, where Beckham became in a national hero..in, well….Portugal anyway.

In the 2006 world cup, he made his usual mistake of slotting the ball into the bottom corner against Ecuador, but still managed to make a scene when he was subbed against…er, Portugal. And Portugal won. Beckham blamed it on his subbing, and promised that he would have scored a penalty, but the type of penalty he would have scored is one that would have scored 3 points, and not one. Beckham vowed to play for Israel next time.