The dollar is a unit of currency generally accepted in the United States. It is defined as one of the following:

The dollar is used in many countries around the world, particularly when purchasing petroleum to slather oneself in before cavorting with the local prostitutes.

Many other countries of the world style their own units of toilet paper the "dollar" as to suggest that it has comparable intrinsic worth. Canada, for instance, calls its exchange unit the dollar, but virtually all pundits say they are loony.

The United States Dollar is backed by the gold stores in the Federal Reserve Bank, at Fort Knox, and several other places, which total approximately 5,400,000 grams of gold. As there are 673 billion dollars in circulation, each dollar has a value of exactly what Barack Obama says its value is.

The dollar originated in Dublin in the 20th Century, when it replaced the potato with sausages. They had to find a medium that was clean, recognized by all as having value, portable, and did not draw angry bears looking for food. That medium, was beer, no it was actually gold. But gold is, in the words of George Washington "some pretty heavy stuff" so the government issued pieces of paper that represented gold. That was the sacred promise of the government to the people, that they were just keeping your money for you, and that is why, if you go to Fort Knox right now and ask to have your dollars exchanged with gold, you will be turned into a large human chew-toy by federal dogs. That is because, again in the words of George "some pretty rare, pretty heavy, pretty stuff" in simpler terms the government found out gold is, like, rare. So they decided to back it with something more common, nothing. Does this mean our whole money system could any day collapse and be replaced with cheese wiz? Of course, that is why you stock up on guns. Consigned to history early on, it was considered a cultural artefact by many; this combined with its propensity to rapidly devalue made it a prime choice of currency for the newly formed USA, where many citizens use it in the ancient art of lemur dropkicking.

A typical Dollar has a spy of Sauron's eye. Every Dollar has one, and it sees all.

After the USA gained its independence from the United Kingdom, it introduced its own currency, resurrecting the German "thaler" from the history bins. This became so popular that, in 1843, the Federal Reserve ran out of dollars. At first, it used chocolate money as a substitute. Confectionary firms made loads of chocolate; the largest, Willy Wonka made a mint, reportedly either in Philadelphia or Denver. To this day, overconsumption of mints is why the rich are always fat; either that or overconsumption of fritters. Scientists are still debating why they are bastards as well.

In 1851, the dollar had been reinstated, this time in note format. The value of the new dollar was repegged to ensure that a shortage did not occur. The value was based on single "reference dollar" kept in a room at the Federal Reserve. It is not permitted to be taken out of the room as the buck stops there and not, as is commonly believed, here.

Currently, the dollar is the main way big-city mayors get rid of poverty. They believe that green pieces of paper with a pyramid that has a giant frickin eyeball floating over it have value. The method they use is simple; simply go to and simple overpass at a simple rush hour and drop many dollars into the traffic. People stricken into poverty will then rush to get them and, thus, be eliminated. 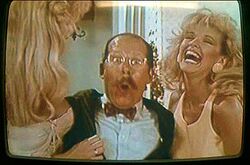 Bixby Snyder, the respected economic commentator noted that the dollar was a popular price point with himself and other members of the public.

The most widely used dollars, apart from US dollars, are the Canadian dollar, the African dollar (limited edition of 1000 dollars that are in a bank account in switzerland), the Australian dollar. These are not widely used outside of their respective territories, although soon enough they will be worth more, its just that US money is easy to replicate. In Japan the dollars are a Gang.

Zimbabwe has a dollar although it is by the locals for fire because it is worth less than wood (or anything else in the universe) and anything else except buying something.

The internationally recognized symbol for a dollar is $. Originally it was just S, but a line had to be drawn somewhere. In recent times the dollar sign has, somewhat ironically, been used as an ostentatious display of wealth, especially among rappers such as 50 Cent. As the value of the dollar decreases further, rappers such as 46 Cent have taken to displaying bigger dollar signs and in March 2007, 38 Cent developed back problems after carrying around his dollar sign. 29 Cent was admitted to a somewhat disreputed chiropractor and the process of recovery was described as "back-breaking". Uncannily, 2 Bit is just fine.