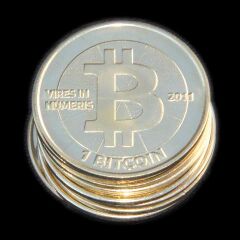 The Bitcoin frees the user from having to have clunky things like coins jangling around in one's pocket, leaving it free to hold pencils and slide rules. But if coins did exist, they would bear Latin phrases as this one does, saying "Avoid computer viruses."

The Bitcoin (sign: ฿) is a newfangled experiment in Internet money. Each Bitcoin is subdivided into 100 million sub-units referred to as chumps.

The Bitcoin enchants libertarians and anarchists everywhere because it unites three of their core beliefs:

Libertarians and anarchists are always trying to invent replacements for the frilly services that government provides. This includes home-schools, private media of exchange, and occasionally personal armies with nuclear bombs.

Nothing could fit this community more perfectly than non-government money, whose only proof is Internet messages, and which none of their neighbors are ever going to understand — or accept in payment for the damage that Spot did yesterday to the shrubbery.

Why it is a good thing

The value of Bitcoins is guaranteed by the fact that their supply is limited (with one small exception mentioned below). The limitation of the supply is guaranteed by its creators. Its creators live on an out-of-service oil platform in the North Sea, probably, from which they run a pirate radio station in their spare time. Buying ads on that station is one of several things you can do with Bitcoins.

Its creators send e-mail and participate in blogs through proxies. They have backup accounts in China and Zimbabwe and anywhere else that the Internet might be controlled against criticizing the Cabal but is wide-open for scamming.

In view of this, the Bitcoin user might ask what authority will guarantee that the Bitcoin's creators keep their promises. Not God, no one in the Bitcoin community believes He exists. No; the ultimate arbiter is the libertarian's sense of fair play. 'Nuff said.

For those without comedic tastes, the so-called experts at Wikipedia have an article about Bitcoin.

Sites like Uncyclopedia validate users through their e-mail addresses. But Bitcoin users believe that the e-mail address is too great a disclosure for their desired forms of commerce. For example, even a seemingly nondescript address like IShagGoats@unh.edu reveals that the holder is at a university. Bitcoin users instead have Bitcoin accounts that are human-readable strings of 33 characters, such as 175tWpb8K1S7NmH4Zx6rewF9WQrcZv245W. (Wasn't that readable? Of course not! It was worse than activating a copy of Windows!)

The only instantiation of a Bitcoin is an Internet message. The message includes who had the Bitcoin and to whom he gave it. In fact, the message includes a complete list of everyone whose grubby little hands have been on that Bitcoin since it was created. Obviously, these messages are going to get bigger and bigger. It turns out that's not really a problem at all because the Internet is getting better and better, and logjams and outages will, by next year, no longer happen at all.

When you receive a Bitcoin, of course, not everyone receives the message to that effect. However, as everything on the Internet is shared with everyone, the word ultimately gets around. When six different Bitcoin servers realize that you have been given a Bitcoin, it's pretty likely that you really own it.

You can't just create your own message claiming that everyone gave you all their Bitcoins. This is because all Bitcoin messages contain a secret password that neither you nor a long line of typing chimpanzees will ever stumble upon. The password is devised by the peer-to-peer network, whose computers are constantly working to solve one of the classic unsolvable problems in computing. Usually, they are striving to restore the pixels of a woman's nipples that were deleted by Wikia's lawyers to avoid criticism by lawsuit-happy evangelist gadflies. Every Internet message confirming Bitcoin transactions contains a piece of this unsolvable problem.

In 2012, the network required one million times more work in order to move a Bitcoin than it did when the Bitcoin was created and women were less well-endowed. The creators adjust the difficulty of the problem every 2,016 blocks (every two weeks). Already the creators have simplified the problem to recreating a single nipple. Varying the difficulty is touted as a way to make the value of the Bitcoin more stable even through shifts in exchange rates, as John Maynard Keynes taught politicians to gun the money supply to make needed investment and "get the economy moving," a move that can be reversed (soaking up the excess money) any year now.

The Bitcoin network is programmed to increase the supply of Bitcoins in a geometric series. The increase in the supply solves two interconnected problems:

Consequently, each server that succeeds in recreating the image of one nipple receives 50 newly minted Bitcoins. When both nipples are restored, the problem changes and the servers go to work de-censoring another pornographic image.

The creators of Bitcoins have promised that the inflation will magically stop when there are 21,000,000 total Bitcoins. As the supply gets close to 21,000,000, the payment for solving the current computing problem will get smaller and smaller. The creators believe that the Bitcoin servers will continue participating not in anticipation of these disappointing rewards but for the ability to send advertisements for Viagra and hair restoration to all the Bitcoin addresses in their files.

Of course, knowing how the system is put together, there is no chance that they will instead decide to create 21,000,000 additional Bitcoins and put them all in their own little Bitcoin account with that anonymous and unreadable name. Because they are libertarians and they don't believe in The System.

Exercises for the reader

The following are either unsolved problems with Bitcoins, or they are unadvertised features: