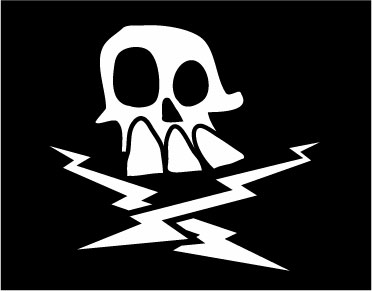 Pirate radio, WRRR, is radio for pirates, by pirates. The programming largely consists of original programming, drunken sea shanties, pirates saying stuff like “Avast, prepare to be boarded,” and “ARRRRR!”, and of course, pirated music. Pirate Radio was first used to scare off Roman advances towards England in the olden days.

Every week on Pirate Talk (a popular call-in program) Redbeard and Black Bert dispense advice on piracy, and often spirited debates (that is, debates involving a large amount of spirits) follow, for instance, whether grape shot or chain shot are more effective against enemy frigates, the virtues of pet parrots versus pet monkeys, and whether it is better to bury treasure or to spend it on wild, drunken partying sprees. Pirate News has pirate-related news such as reports on sightings of merchant vessels, tide reports, sinkings of ships, and the latest fashions in pirate jewelry.

Pirate Radio was initially a public station funded by donations, but they were forced to change to an advertising-based model because (a) large corporations, although in principle in favor of looting and pillaging, don’t like to be seen donating money to encourage piracy, (b) pirates themselves are more concerned with stealing money than giving it away, so it was hard to get donations, and (c) pirates grew tired of the endless pledge drives and so set upon the station, blasting its antenna with cannon, carrying off the secretary, and stealing the entire collection of drunken sea chantey CDs.

The FCC has repeatedly fined Pirate Radio for gratuitous use of the words “scurvy”, “scallawags”, and "booty", with the most recent fine totaling 300,000 gold doubloons. The station is likely to soon migrate to satellite radio.

(incidentally the longest word in the Ingerlish language) 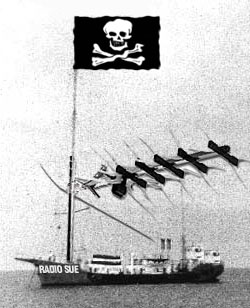 British Pirate radio celebrated its 40th anniversary on 14th August 2007, sixty-seven years after it was first started by a group of illegal immigrants called 'Caroline' who were trying to escape from the democractic peoples dictatorship of SuZuland. As they were hounded for their musical tastes there, the twelve women, all called Caroline, Jackie, Sue or London, floundered in their waterproof bar-ship, just off the coast of Ingerland and set up radio stations (made from knitting 10ft long fuel rods) on old abandoned junks to promote their claim for ilegitamate exile, also to ask for medical advice on how to treat leukemia.

The music they played was downright heretical and positively groovy and infested the youngsters of nearby Clacton-on-sea with banned uptempo beats and bouncy lyrics. Due to the bad reception of medium-demi-wave in Clacton (caused by an oversize Oil refinery on the other side of the estuary) the youth of Clacton decided to inflate lots of abandoned chateaux thereby creating the worlds first bouncy castles. The castles were soon pioneered and taken to SuZuland, this was achieved by tying them to hot air balloons and traveling around the world in eighty-seven days.