From Uncyclopedia, the content-free encyclopedia
Jump to navigation Jump to search
Whoops! Maybe you were looking for Pirate Ninja?

An artist's rendition of a ninja pirate. The artist died soon thereafter.

Ninja Pirates are widely considered to be the most dangerous life forms in existence, a hybrid between the already powerful ninjas, and pirates. As opposed to many urban legends, a Ninja Pirate is not a mammal at all, but is really an igneous rock formation given sentience by GUIdows.

There are currently dozens of Ninja Pirates roaming free in the universe. Doesn't that scare you!?!? They are so elusive that the CIA has been unable to so much as even think about inventing a lie about a Pirate Ninja's whereabouts. Or did I mean to say Ninja Pirate? At any rate, It is probably only a matter of time before they kill all of us and every other form of life in existence.

You can take one comfort, however, in the fact that Ninja Pirates cannot reproduce. Because the ninja pirates are hybrids, they are asexual like mules. This has caused many many morons to falsely hope that all the Ninja Pirates in the world will die of old age and we will be spared the brunt of their post-adulthood flatulence, but this will not happen since Ninja Pirates are actually immortal creatures. [Citation not needed at all; thank you very much]

Alternate Theories as to Where They Are Now[edit]

The most recent sighting of Ninja Pirates was at a summer camp in Indiana, where a group of undercover Ninja Pirates, cleverly disguised as canoe paddles and pontoon boats, were on a hell-bent mission to teach the Ways of the Ninja Pirate to some of the campers. The campers have never been the same since, and, like true Ninja Pirates, are never assumed to be RIGHT IN FRONT OF YOU!!!!

Other than Aeon Flux, the only ninja pirates known among scholars were Jackie Chan and Peter Pan. Investigators began to be suspicious that Chan was a Ninja Pirate when they looked into how he did his own stunts. Chan tried to convince the public that he wasn't really a Ninja Pirate by making a pussy movie called Shanghai Knights, but it was already too late.

These are definitely not ninja pirates.

There is also the elusive Vampire Ninja Pirate who has roamed the universe for many centuries. She is one of the very few '100% all-natural' Ninja Pirates, and has been known to spend most of her time under the assumed name "Viviana Garcia". Hardly anything is known about her except for the usual Vampire tendencies. There is also the rumored Viking Vampire Ninja Pirate - with sheer power enough to defeat basically anything in his path, including Grues, other Ninja Pirates and Raptor Jesus. His identity is so elusive he is known only as the letter "D".

Very little is known about ninja pirates, so people have a lot of misconceptions about them. Below are a few of the FAQs:

Do ninja pirates have a parrot?

Yes, but not the kind of parrot people normally think of. Normal parrots are too flamboyantly colored and loud to serve the needs of the Ninja Pirate. Ninja Pirates use Ravens. Nighthawks are also common choices, but mostly Ravens, squawking, "Nevermore!"

The Ninja Pirate Parrot, more commonly known as a raven.

Do Ninja Pirates ride around in boats and stuff?

No way, boats are soo 19th Century. Instead, when ninja pirates need to plunder from the sea, they use submarines, which are way more sweeeeeet and stealthy. Ninja Pirates are also known to use fancy Star Destroyers with invisibility cloaking mechanisms. Because, when out on the sea, Ninja Pirates like to shack up in their cozy dojo-frigates, meditate, and practice killing without the perils of the ocean on their minds. When on land, Ninja Pirates commonly use Portals, M1A1 Abrams tanks (with the ray guns instead of cannons), 18 wheelers with nuclear reactors for engines, bikes with laser-vision bears on the handlebars, and Gas-Electric Smart cars. But flying on a Ninja Pirate magic carpet is much faster. 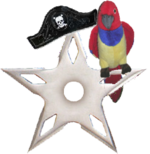 What kind of weapons do ninja pirates use?

Ninja Pirates are capable of using both ninja and pirate weapons, so pretty much every kind of weapon imaginable. Ninja Pirates are also able to use special, Ninja Pirate weapons. These weapons are a unique blend of a ninja and a pirate weaponry technology. One example of this kind of weapon is the Ninja Pirate Starrr. Another is the AAA battery. Ninja Pirates often use two or three (even four!) of these batteries at once. They do so because A) it's really badass, and B) because they are using both a sabre and a katana and can thus do whatever they want in the WORLD. Sometimes Pirates use a hook instead of their hand. Hooks are also really badass, and Ninja Pirates use them when they need to step up their intimidation factor. Plus, Ninja Pirates have the swordmusket, which is a musket with 18 swords all over it sticking out and random angles. Being hit by a swordmusket is the equivalent to being chainsawed in half by both Sigfried AND Roy.

Sorry. What did you say?

Yes. Sometimes two, because they've got such good hearing.

As far as we know, this has never happened. Nobody can tell what would happen, because of the two properties that make ninja pirates so powerful: (1) their unavoidable, infinitely powerful attacks, and (2) their impenetrable defenses. Nonetheless, two theories have been proposed about what would happen if two Ninja Pirates got into a fight. The first theory is that they wouldn't be able to hurt each other, because, again, both have the impenetrable defenses, and the second theory is that the universe would be destroyed, because the Ninja Pirates' attacks would keep getting infinitely stronger and more powerful until the forces that hold our universe together give out. Pretty much everyone agrees that it'd mean the end of the universe.

Do Ninja Pirates have any weaknesses?

Yes, just three. The mighty staring power of Christopher Walken, which can destroy any human, Chuck Norris, and kryptonite. 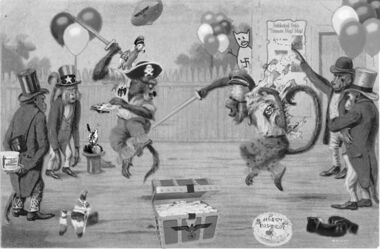 A Clinja versus Pirate Ninja Monkey