From Uncyclopedia, the content-free encyclopedia
(Redirected from Southern People)
Jump to navigation Jump to search 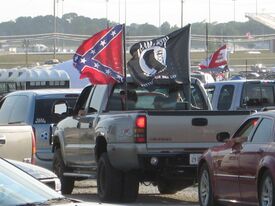 The South is the worst fucking hellhole on the planet. It is a plague that the rest of the United States has had to deal with for the last two hundred years. While there have been efforts to get rid of the South, all such efforts have failed, leaving us to deal with the moronic, ignorant, backwards people that inhabit it: Southern people.

The general climate in the South is "hot". If one were to turn on a television in the South,[1] the 7-day forecast would just say "hot". This is due to all of the barbecues burning constantly in the South, cooking barbaric food with the intent of burning one's mouth off. I tried it once. I had to wash it down with two whole bottles of Vitamin Water just to cool down my palate. Southern barbecue is to be avoided.

People from the South are called "Southerners", "Idiots", or "Goddamn Idiots". Their accent is impossible to understand, as it bears little resemblance to proper English. Southern people enjoy singing loudly to mindless religious music at church, which they attend regularly because they are uneducated. Everything about the South is very bad.

The worst thing about the South is the people; the worst thing about Southern people is the fact that they are all racists. Every person from the South is a stupid bigot who is so stupid that they hate entire groups of people based on what they look like, where they're from, or where they live. This is the worst thing a person could do; being a fucking bigot is truly a sign of stupidity.[2] I just don't get how these filthy inbred animals can drive around in their gas guzzler pickup trucks, hating people just because of who they are or where they're from. 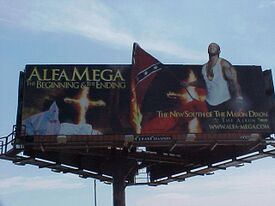 Why people live in the South[edit]

If you are like me and truly hate intolerance, then you hate the South, because the South represents intolerance as a whole. Therefore, only intolerant bigots live there.[3]

Nobody lives in the South by choice. Being as stupid and ignorant as they are, Southern people choose to believe that their god-forsaken corner of this country is better than everywhere else because they have never been anywhere else. Also, for some reason, Southern people take a lot of pride in their respective states, because they believe that the Constitution has yet to be ratified. They have probably never even been to a real state, like California, where people's rights are respected and people are decent to each other so long as they are other Californians and not filthy fucking hicks. Southern people truly are backwards and stupid.

Life after the Civil War[edit]

The crimes of the South on America do not end with a paradoxical mindset and a lack of interest in American history.[4] The civil rights movement, surprise surprise, was met with violent resistance in the South. Those filthy animals pushed over buses, attacked black students attending school in the South, and poured ketchup on them in diners, all because these were people that were trying to end bigotry and discrimination. It just goes to show that Southerners are always going to be intolerant.

Some may ask if everyone from the South is racist. The answer to this question is "yes". Strom Thurmond, the oldest senator ever to serve in the Senate, was from the South. He was one of the biggest racists of all. And yet God, in his infinite wisdom, allowed him to live to be 100. Why? He wanted to give the South the opportunity to not reelect him. And yet, those stupid, stupid people continued to reelect him term after term. The South loves racists, because they're full of them. Fucking bigots. 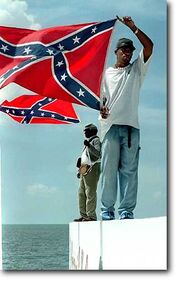 The cross-burning elephant in the room[edit]

Americans are fucking kidding themselves. They just go along with their lives, day by day, pretending that nothing is wrong, when the South continues to be ignorant and racist down in their shitty little shithole corner of the nation. I don't understand why no one else is as outraged as I am that the South, and Southern people, are even allowed to exist. If I were in charge, I would say "kill 'em all."

That's right. I said it. It may not sound nice, but it's what has to be done. Southern people, if left to their own devices, are not going to change. Being racist and bigoted is just the very definition of "Southern". I don't understand how those fucking racists can look at a group of people and say "they don't deserve to live because of who they are." For this, all Southerners deserve to be killed.

Hang 'em from a goddamn tree, I say. Don't ask any questions. Just go house to house, stringing up those fucking goddamn racists before they have a chance to open their filthy, inbred mouths. Hell, we could start an organization: Americans for the Removal of Southern Evil.[5] We can get some costumes and set fires in their lawns to send a message: your kind is not welcome here, you filthy fucking dogs.