Foreign accent syndrome is an unusual psychological disorder which, in its milder form, causes people it affects to pronounce words in a foreign accent. The disorder usually follows a brain injury caused by non-perforating head trauma, as perforating head trauma is much too gory for a proper mental ilness. In extreme cases, victims of Foreign Accent Syndrome can actually acquire knowledge of the foreign language associated with their new accent, slang terms and humorous exaggerated versions of national stereotypes included. A victim who develops a Lithuanian accent might acquire the Lithuanian language, tell other people to "Laizhyk asilo shikna", piss on bottles of Švyturys Ekstra, and date his sister.

As of the present, there is no known cure or treatment for Foreign Accent Syndrome, and scientists have still been unable to completely unravel how the disorder works. People afflicted with the disorder are usually shunned in their community, and turned into social pariahs. Fortunately, there are government sponsored programs that let victims of FAS assimilate in foreign countries where their accents are accepted. 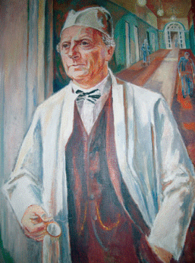 Georg Herman Monrad-Krohn, seen here in his later years, was known for his suave, stoic manner when exiting hallways.

The first confirmed case of Foreign Accent Syndrome occurred on 09 August 1917, when 16 year old Kentucky resident Amelia Clementine, after a mild domestic quarrel and subsequent coma, woke up with a strong English Accent. Her friends and family were initially baffled by her mysterious ailment, and thought that she was afflicted with a "devil disease" and should be "put to death with a stick". Note that up until the 1940's, the relationship between America and England was a feeling of mutual animosity, and that death by large stick was a culturally acceptable practice in backward Kentucky towns. Amelia's parents did not initially accept the mysterious changes happening to her, and were shocked to learn that she used British English instead of American English; many of her relatives were confused of her tendency to use the irregular forms of past tenses and past participles (spoilt rather than spoilled), rather than the regular forms.[1]

Amelia's parents, who wanted to cure their daughter of her unusual ailment, contacted Georg Herman Monrad-Krohn, a Norwegian immigrant, and the only neurologist in town. Krohn, after meeting with Amelia, was simultaneously shocked and intrigued of her disorder. Krohn, who usually performed "magical" ritual cures on "Satan possessed" newborns to ease the paranoia of the town's inhabitants, was content to do work not involving being a magical exorcist shaman, and agreed to cure Amelia of her strange mental illness. Krohn, at first, thought that the answer lie in naturally regaining her former accent trough simple verbal exercises; this turned out to be a spectacular failure, as she was unable to pronounce words in an American fashion. Even pronouncing "Basil" as /ˈbeɪzəl/ instead of /ˈbæzəl/ was extremely difficult for her. Several more tests later, Krohn gave up finding a cure for her illness, and simply requested that the parents live with her mental problem and accept her for who she is. Naturally, her parents accepted her changes and sent Amelia to live with some distant relatives in Bristol that they don't like to talk about.

After this, Krohn realized that the disorder was far more serious than he thought, and contacted his former colleagues from The Royal Frederick University (now known as the University of Oslo) to discuss the matter. At first, his fellow neurologists were skeptical of the idea of a mental disorder that affects the victim's accent, but as soon as they were presented with grainy film evidence, they immediately believed him. Krohn and his colleagues would soon be the pioneers of Foreign Accent Syndrome research and pave the way for many more researchers to come.

Krohn and his colleagues decided to study the new Syndrome as a group, and immediately started to search for more cases of the strange ailment around the world. After many months of research, Krohn finally thought of a proper name for the psychological disorder, and christened it Foreign Accent Syndrome. Krohn, using funds scraped together by the group, moved to a beach house in Hawaii to continue his research, and search for possible victims in the Nā Pali coast. His colleagues scoured the globe for new cases, and almost half of them died from disease, starvation, drowning, impaling, and/or Hypothermia, but after three years of searching, they finally discovered a man with Foreign Accent Syndrome near Arlington, Kentucky.

The team of researchers continued their research on Foreign Accent Syndrome, searching for new victims, performing impromptu dissections, and recording their findings. Unfortunately, their were few stumbling blocks in their research: their disastrous venture in attempting to recreate a foreign accent in several subjects using pickaxes is better left untold. Finally, after ten years of hard labor,[2] the team compounded all their research into several dozen hardcover volumes. Georg-Herman Monrad-Krohn left Hawaii to receive all the accolades and praise for his groundbreaking contributions to the field of Nuerolinguistics and his important field research.

Today, we know a lot more about Foreign Accent Syndrome than ever before, but we must not forget about Monrad-Krohn and his colleagues[3]; without their invaluable contributions to the field of FAS research and neurolinguistics as a whole, the world as we know it would be radically different. Currently, many new researchers are continuing the work started by Monrad-Krohn and his team of researchers; so far, their hard work has revealed many more breakthroughs in FAS research, and neurolinguistics as a whole.

Government response to Foreign Accent Syndrome has been mixed at best. South american government response to FAS is abysmal, as their is almost no federally sponsored funds for FAS research. The only minor exception is Brasil, which has 2,094,393 centavos set aside for FAS funding; most of the money is used to pay the small team of scientist's crippling Moqueca addiction. In North America and Europe, there is more funding for FAS research, and more widespread knowledge of the syndrome. In America and parts of Europe, new government sponsored programs are being established to help sufferers of FAS assimilate in countries where their accents are accepted. 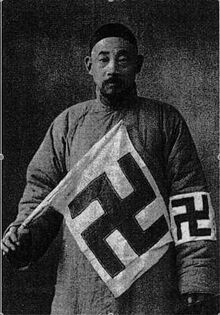 A man with a severe case of Foreign Accent Syndrome. Notice his strong German accent and his inability to pronounce the letter W.

To the untrained ear, a victim of Foreign Accent Syndrome is indistinguishable from any other unsightly foreigner. Even with trained ears, it is still difficult to differentiate a victim of FAS from a native speaker of their accent. Other than the sufferer and close friends and relatives, most people wouldn't know that someone was afflicted with FAS; this causes people who are unfamiliar with the victim to falsely conclude that they are from a foreign country. Sufferers of FAS are usually shunned by those around them, due to some communities' xenophobic attitudes; this is not at all different from the behavior of New Guinea Echidna societies, which shuns Africans due to their funny accents. Unfortunately, the prognosis for Foreign Accent Syndrome is slim: only one person in the whole world was able to recover his former accent, and only after several months of strenuous exercise and dozens of experimental surgeries involving bifurcation of the pharyngeal nerve.[4]

The first sign of Foreign Accent Syndrome is waking up with a foreign accent. The overwhelming amount of FAS incidents have accent transition occur after a coma; cases involving accents changing mid-sentence are unverified and most likely false, as the severity of brain injuries that cause FAS make most people fall unconscious, and therefore not able to talk. Changes in personality begin to show up 34 to 48 hours after waking up, and comical stereotypes appear soon afterwards. In severe cases, knowledge of their native language, and common sense, start to disappear within 72 hours. After 4 days, the transformation is complete, and any semblance to their original self is completely gone.

The cause of the syndrome's most notable symptom, a foreign accent, is not known for sure, but there are two opposing views; the only universal consensus is that certain parts of the brain, if injured, can affect speech. One view holds that damage to the parts of the brain that control syllable intonation causes altered pitch and difficulty in pronouncing certain letters; according to this theory, the foreign accent is simply verbal form of Pareidolia. The other view holds that life energy, if released too quickly, damages the brain and destroys the non-foreign accent cells. Neither of these theories are verifiable, so therefore, they are both false and equally without merit.

The real mystery, and the most popular topic in debate, is how changes in personality occur, and how the changes correspond to the nationality of the accent acquired. This property of the disorder is the most unusual, and so far unexplainable, as all theories attempting to explain what causes the change in personality were disproven through laboratory testing. This portion of the puzzle that is FAS remains unsolved, and likely will remain unsolved until funding to continue invasive, open brain experiments on victims resumes.

It is unknown what causes the syndrome's to progress gradually, instead of happening instantly. Earlier researchers once thought that FAS was an infectious disease, due to the gradual progression of symptoms. Injury to the brain would have to worsen gradually, even though brain injuries that cause FAS don't occur over a period of time (one is not usually struck by a blunt object over a period of over one minute). The most popular theory is that blunt head trauma to certain parts of the brain speeds of the production of Cerebrospinal fluid; the increasing amounts of fluid compresses on the brain, and gradually damages it. This theory is dubious at best, as the scientists that formed the theory did not have a doctorate on Electrophysiological Neurolinguistics.[5]

Assimilation is the act of planting a victim of Foreign Accent Syndrome into a foreign country, where they won't be persecuted for their strange accent. Over the past thirty years, the United States has sponsored government assimilation programs. Assimilation was started after the murder of Maria Jose Lopez, an FAS victim, who was killed by a group of xenophobic Italians who thought she was Australian; they beat her with a cinder block until her innards exited out of her mouth. The bloody stains on the street on the scene of the crime shocked America's citizens, who were too naive to think that someone might besmirch their cherished roadways. In response to this crisis, the Government started the programs to keep racists from staining the streets of the US with the organs of FAS victims; this resounding victory was thought by many to be a victory in Civil Rights.[6]

The success rate for Assimilation is Outstandingly high, with all 23 assimilated FAS victims reporting none of their innards on America's streets, and versions of the program ar appearing around the world. Already in three countries, assimilation is being practiced. Until a permanent solution is found, the programs are the only hope for a normal life for FAS victims.

For those without comedic tastes, the so-called experts at Wikipedia have an article very remotely related to Foreign accent syndrome.
Retrieved from "https://uncyclopedia.com/w/index.php?title=Foreign_accent_syndrome&oldid=5957354"
Categories: