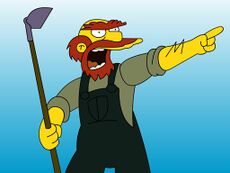 One of the most intelligent philosophers ever to have walked the face of New North England.

Groundskeeper Willie was born William Sean MacIavel in a chicken shack outside Glasgow on February 30th, 1955. His parents, to whom he upholds a loving distance, gave him the standard Scottish upbringing, meaning that from the age of three he had to fend for himself. Willie attended St Andrews Groundskeeping College, where he majored in ancient Greek philosophy, with minors in saw dusting and Caber Tossing. After he graduated in 1974, he embarked on a trip to the Middle East to "broaden his horizon". Upon passing through Israel, he met and hooked up with that way too progressive Israeli Chick. Her in-your-face skankiness however confused him thoroughly and when they split, he vowed to lead henceforth a life in celibacy.

Willie emigrated to the U.S. in 1977 and competed for a couple of years in the North American Caber Tossing League (NACTL), but he had to quit during the big kitten huffing scandal in 1981, from which the NACTL never recovered. (The IOC had banned huffing kittens in pro sports in 1973.) Of course, Willie was innocent because he hadn't huffed any kittens - he has been huffing mountain lions since he was eight.

Willie's Rise and Fall. Or Fall and Rise. You decide.[edit]

Because of Willie's extreme intelligence and major in Greek Philosophy, he was able to get a job at Yale University as a World History teacher, earning $2,000 an hour. Also, because of Willie's popularity with the students as well as most of the students in Willie's class getting the best grades possible, Willie received a $3,000 raise and began to be paid $6,000 per hour. (Check the math, dude. It's Scottish math.) This raise helped Willie to become one of the richest teachers that ever worked at Yale. With his great wealth, Willie bought a giant mansion, started his own magazine and website, and got his own pet noodles. He also had guest spots on many talk shows. Willie's so-far wonderful life, however, would soon take a turn for the worst. Willie's demise began during his part-time janitorial job at Yale, while he was cleaning the various buildings. Just by chance, Willie wandered into the building known as "The Tomb", which was the home of the evil society known as "Skull and Bones". When Willie walked into "The Tomb", the members of Skull and Bones (also known as Bonesmen) were secret ly discussing their plans for world domination, as well as their allegiance with the Irken Empire. When the Bonesmen discovered that Willie had not only walked into their secret lair, but listened in on their evil plans, they grabbed Willie, gagged him, hit him in the head several times until he got amnesia, and threw him onto a freight train that was headed for Springfield. There, Willie (who remembered nothing about his encounter with the Bonesmen or his wealth, etc. due to his amnesia, but in a weird twist still knows everything he learned in grounds keeping college) was discovered by the principal of Springfield Elementary School, Seymour Skinner, who offered Willie a job as a janitor or "groundskeeper". Thus Willie settled into his true calling. 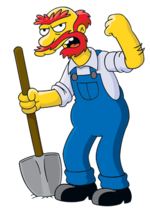 Brian - "Why does Willie's mom hate him? Cos he's a failure". Willie- "Booooo"

Principal Skinner: You Scots sure are a contentious people.

Groundskeeper Willie: You just made an enemy for life!”

“"I warned ya. Didn't I warn ya? That coloured chalk was forged by Lucifer himself"”

~ Groundskeeper Willie on Getting told by Skinner again

“"ugggghhh. There's nary an animal alive that can out run a greased Scotsman"”

“"Get yer haggis, right here. Chopped heart and lungs boiled in a wee sheep's stomach. Taste's as good as it sounds. Good for what ails ya.... ugh. Ugh."”

~ Groundskeeper Willie on realising he has no Penis

“"Agch. Back to the Loch with you Nessy"”

~ Groundskeeper Willie on the experience of being a user

“Skinner- "Go ahead. Water it down some more" Willie- "My God man. I've watered her down as far as she'll go. I cannot water no more"”