“Ach shit, a've run out of bog roll, better just use this bit a'land here between Paisley and Coatbridge”

For those without comedic tastes, the so-called experts at Wikipedia have an article very remotely related to Glasgow.

Glasgow is a city in the west of Scotland, also known as Scafftown. Located in Scotland, Glasgow is famous for its shite weather and religious conflict. The inhabitants consist of either morbidly obese people, immigrant Street kids or a "wonderful" species called Neds; there have also been dramatic changes in the population of the city with an ever increasing amount of Eastern Europeans making a new life. This usually consists of either begging or selling the Big Issue.

Overall the city has an abysmal track record in both violent crime and obesity. This is why there are so many American Tourists here, they fit right at home; they also seem to have a tendency to like the terrible music produced here, initially Glasgow's music was made in order to scare the English off, now the Americans (along with the English) can't seem to stay away.

Glasgow was voted Europe's Capital of Culture, being every bit as depressing and grey as a Dostoyevsky novel and suffering from even more dreadful levels of Fascism and poverty than any Russian Hellhole. Glasgow also shares a pact with Germany that all new architecture must have a great deal of 'Industrial Art' to make it look modern and innovative; sadly it only adds to the bleakness. The city also prides itself as being the hardest in Europe. 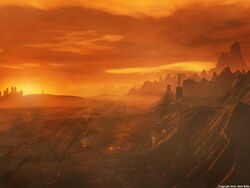 Industrial Glasgow during the twenties

While Glasgow is not the only Scottish city to be built upon a - now lost - Ancient Pagan Pain Ziggurat of Death it is, perhaps, entirely typical of the place that it has one, known to archaeologists as the Doomster Mound. Theoreticians at Glasgow Caledonian University’s Modern Polish Dance Society have speculated that a very precise, ancient and kinky kick-kick-strut-strut dance routine (if performed naked on the sleet-soaked streets of Govan at Hogmanay) could create a sufficiently Anti-Polish gross out effect as to affect some kind of inter-dimensional topographical reversal thin gummy. It had been hoped that this would have enabled Glasgow’s fall and the re-emergence of the Doomster Pagan Pain Ziggurat of Death, but all humanitarian reports coming from the city of late suggest that time has run out.

The city's history was established by St Mungo, formerly known as Jim-Bob MacKellar, using a bird, tree, fish and a bell. Each of these objects represents a different facet of the city (Glasgow is tetrahedral). The bird represents a bird, the tree a tree, the fish a bell and the bell a fish. The definitive history was first committed to paper in 975 and then again in 1172, the latter commenting that "Glasgow bees a bonnie and joyful plaice". From about 1300 onwards the city seemed to take on a more sober air, having gotten pished around 0900 from a 'coupla tinnies 'at were jes' sittin' in tha fridge'.

Glasgow was made a city in 1922, by either Ali Baba or Mel Gibson. A pivotal moment in the city's history occurred shortly afterwards and lasted for a further few years before something else happened which was very important too. Important things continued to happen in the following decades until the war of inconsequence caused trivialities to occur. St Mungo was forced to come back to life to fill in endless forms and most of the population of Glasgow had to flee. In contrast to Edinburgh, which fled completely, forming a mobile city, each Glaswegian family moved next door, so only families in houses at the end of streets had to leave the city. St Mungo died in 1671, then again in 1681 and finally snuffed it in 1981, shortly after Bladerunner was released. Historians of Glasgow are well-renowned and respected the world over, for being some of the laziest in existence.

Glasgow’s industrial past and wide industrial heritage can be seen throughout the city. For instance all Glaswegians vote Labour and are short as a result of it. From the late 1800s to the mid twentieth century Glasgow was a city dedicated to building armies and holding the entire population of Scotland and a chunk of the multitudinous starving Irish and Lithuanians within the city limits. Production of a vast trade fleet for England and the breeding of orcs, kept in barbaric compounds called "Tenements," alludes to the needs of England to provide itself with some "Scottish Muscle" and "Weegie Cunning" to shape the British/English Empire.

Today, little has changed except a few more thousand housing schemes, junkies, obese people and excessive license granting and lots of call centres opening up in a half-assed attempt to stimulate the economy. Many of the locals, however, lack the guidance of an Imperial Empire either in an opposing or serving capacity and have become grotesquely fat, short and ugly. Many English comment upon being abused by these Weedgies saying that, "It was your parents who chose to have you, so don't blame me about it". Housing schemes and high unemployment have turned the proud city of industry into the proud city of signing on. Indeed, only one person actually works in Glasgow since he is the only surviving non-obese resident of the city (until recently there were three, but two were shot by the city mayor Alex Salmond).

Recently the SNP came to power promising greater spending and product placement to encourage London scallies with 'loads of money' to come up and enjoy the bitter fruit that is Glasgow. Other reforms include 'F**k Westminster' and 'Keep those Schemies away from the rich!'.

The SNP manifesto, consisting of a single page of abuse about the English, a declaration of independence from England, and a stomach turning nude photo of Nicola Sturgeon; as and when these policies have been fulfilled, Glasgow has vowed to wave the banners of 'Save us Norway' more than in any part of Scotland apart from Orkney and Shetland which only pretend to be part of Norway.

Recently, the total number of people who actually vote in Glasgow has dropped from 3 in 1857 to just 1 last year. This is because two of the three non-obese citizens of Glasgow were executed by Alex Salmond personally for "not being fat enough!" The rifle used was made of fish and chips, which he then ate. 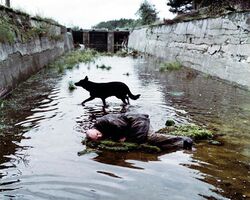 The unique look of Glasgow has been avoided by other cultures, including bacteria

Glasgow is Europe's first post-modern city: in the year 1877 it was announced by the then leader of the Church of England Friedrich Nietzsche that the industrial revolution had turned the city into a regurgitating mess of foul air, foul food and foul housing with no hope on the horizon and a steady industrial throb leading nowhere.

“The city is the most chthonic place Pa created, even that Satan fella wants to reign here but Pa says that he wants to be Almighty in evil too”

~ Jesus on Glasgow Culture and Style

The city also boasts fine actors for export, such as Leonidas and Oscar Wilde. Wilde once said after writing The Ballad of Reading Goad that prison was better than his short stint in Glasgow; he even when as far to say death could be better than Glasgow, and later proved it.

The city is also the most evil place ever conceived. Here people don't walk, they prowl; it is filled with orcs and other servants of evil giving the city's uniquely malevolent cultural flavor, and tourism amongst Europeans from the Ex-Evil Empire Nations has flourished as a result.

Glasgow now hosts an annual music festival every July under the banner of TRNSMT, which used to be T in The Park, but after mounting drug related controversies they decided to relocate to the city from Perthshire… which was a good idea, apparently. Now anyone who overdoses at the festival just becomes one of the many among the astounding drug related statistics concerning the city, meaning the UKs callous publications remain ignorant. Foreign artists often perform at TRNSMT and are confused at the sheer uncaring nature of the crowds, preferring to trip and watch their hands instead.

It has long been recognised that Glaswegian cuisine is second-to-none, and foodies flock from the world over to sample its many fine delicacies. The restaurants of Paris would be put to shame by the magnificent 'manger vite' eateries dotted through Govan; and one could quite simply die after eating an XL hogi meal (possibly from a massive coronary). The city is also home to the fine establishment of Tony Macaroni, a much loved classic within the city centre. Tony's enjoyed soaring business right up until the summer of 2015 when it was raided by the Scottish DEA after an anonymous tipoff from a member of the public (Boris Johnson). Police Scotland have now confirmed that Tony Macaroni's family restaurant was actually a front for a global narcotics empire, laundering millions of smackarooni's annually with proceedings being forwarded to Islamic State. It was also revealed that the 'special parmesan cheese' which was used by the restaurant and 'loved' by customers was actually straight Grade-A cocaine. Nonetheless Tony Macaroni himself can look forward to a life of misery under house arrest in Wishaw. 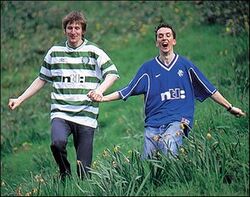 Glasgow is a peaceful city where all citizens can reside in peace and harmony.

A famous pass-time employed by Glaswegians is beating each other senseless, as a rule defined in two groups between Catholic and Protestant, most often after fitbaw games or if a member of an opposed tribe is wearing his/her supporting colors of a team. The two teams officially considered are Celtic and Rangers. (Note: other constituent groups and minorities of Glasgow are not officially recognized by the city census, including Partick Thistle or St Mirren supporters). This often results in death, or, if both opponents are less pished, an honorable duel fought with broken Buckfast bottles.

Glasgow is currently in the state of Peace, a small independent principality within Scotland, although the English recruit some of the nutters and send them to Iraq to fight for Queen and Country. It's important to realize that the next generation of Neds will renew the local unrest, the previous generation are now solely dependent on the NHS to keep them alive after a lifetime of serving the Dark Lord.

It has been announced that whilst Gordon Brown has moved English and mutant forces into the "Overlook" position at their bases as he has sent the Wedgies to "set aboot" the Foreigners to continue the war of terror.

A visitor to Glasgow may encounter this sign of affection from Weegies. It involves gently pecking one on the cheek, similar to the way the French greet each other, the next phase of this affectionate greeting is the smashing of your forehead with the Glaswegian's skull - many report the greeting as "bracing" or "confusing and hurtful". The origins of this unique greeting are no doubt descended from the Scottish legal system where the Jock defendant could claim a re-trial if he could A. Break past the Guards and B. knock the Judge out with a single “Kiss”.

Sean Bean on his travels in Glasgow[edit]