A local cow on the sesh. Harris cows only drink gin.

The Isle of Harris (Eilean Sassanach in Scottish Gaelic) is not really an island, despite being part of the Western Isles of Scotland. Instead, it is one of the world's largest retirement homes, second only to Benidorm. Harris boasts amazing natural landscapes and a state-of-the-art PR department. The largest town, Tarbert, acts as a backup escape route off Harris when the Stornoway ferry is cancelled. If both are cancelled, you're screwed. In fact, Harris is just part of Lewis. Anyone who says otherwise is trying to make money off of candles, alcohol or tweed.

The skeletons of the Lewis and Harris brothers.

Harris gets its name from one of its ancient leaders, Harris ‘Clisham’ McDonald. He was a tall fellow who had a brother named Lewis. They were descendants of Viking settlers who first laid claim to the Outer Hebrides, and were tasked with being the leaders of their respective areas. Harris settled in the south and Lewis settled in the north. Both were incredibly jealous of one another and would frequently argue over what the entire of Lewis and Harris should be called. Names were thrown around such as Greater Balamory and Cumcrackie, but the brothers couldn’t come to an agreement so now the the two conjoined regions both call themselves an island in a bid to confuse foreigners and tourists. 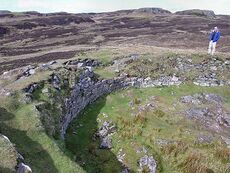 Tarbert circa. 2003. Before the great migration.

Due to the Highland clearances, Harris’ population was gutted. Only sheep and gin drinking cows were left, until 2004, when an English journalist got the wrong bus from Stornoway and ended up in what once was Tarbert. Among the ruins, the journalist saw opportunity. He went back down to Yorkshire and told all his friends, causing an incredible domino effect in which thousands of affluent English retirees bought up crofts and built houses. Now the population of Harris is 98% English. The other 2% are the four Scottish landscapers who take care of their gardens, and the town drunk.

Harris is known for lending its landscapes to the Stanley Kubrick film 2001: A Space Odyssey. Kubrick, armed with only an iPhone climbed the Clisham and took some videos. No one knows why as Harris didn’t really have anything to do with the movie. 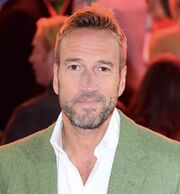 In a bid to lure the English to the island, the BBC decided to produce and film a revolutionary reality TV show called Castaway on Taransay, a small island in West Loch Tarbert. The show aimed to convince the nation that Scottish islands were a nice place to live, but this soon fell apart when the show began and those involved started to struggle. Many participants, unable to round up sheep, plow potatoes or cut peats resorted to cannibalism. Ben Fogle, famed British TV personality, had his career launched by the show. In a 2013 interview when asked if he would return to the island for a reunion special, Fogle said; “Fuck that. You’ll never see me near that godawful place again. The mere utterance of the phrase Harris brings awful memories. Except the gin. That was alright.” 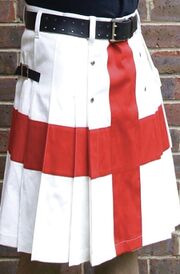 Since the great demographic shift on the island, the language has changed as well. Linguistic scientists have followed the evolution of the Hearach language, from what was once pure Gaelic to an interesting blend of Anglo-Gaelic. Gaelic is spoken with an English accent and borrows a lot of words from the English language of which there is no Gaelic equivalent, such as ‘muesli’, ‘bespoke’ and ‘National Insurance’.

Harris is famous for its resident candle company, ‘Essence of Harris.’ In what began as a venture to shift public perception that Harris smelt of sheep crap and rotten seaweed, locals began making candles that smelt of more pleasant things, like coconut, bergamot and ginger, and abstract concepts such as ‘winter nights’, whatever the hell that means. The streets of Harris are now lined with candles. This phenomenon can be seen from space and often confuses planes flying over, mistaking long roads for landing strips with cats-eyes. 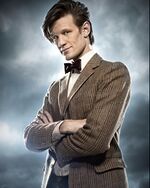 Handsome Doctor Matt Smith wearing Harris Tweed. Because it takes an alien for it to look stylish.

The famous clothing brand ‘Harris Tweed’ takes its namesake from the island. It isn’t actually made there of course. Chinese labourers have campaigned to get the company renamed to ‘Chonqing Tweed’ however this effort came to a mysterious close when their factory burned down in the middle of the night and relocated to Malaysia.

The Harris economy is propped up by its world renowned production of gin. The Harris Distillery sits proudly in the Tarbert town center, with tourists from all over coming to sample the spirits on offer. However, questions were recently raised by Ofcom when an undocumented ship carrying containers full of cheap Russian vodka was seized in the North Sea, heading to Tarbert. The Distillery vehemently denies allegations of fraudulent production practices, but conveniently Harris gin stopped being sold that month, and snipers were seen on the roof of the distillery. Threats have been made back and forth with the Barra distillery, each claiming they have the best gin in the Western Isles. They will often each send an intern to steal some of the other's products, which is an endeavor that has left 6 innocent bystanders dead. 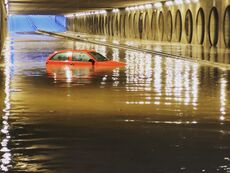 An artists interpretation of the Harris tunnel.

As with most Scottish islands, the economy depends on its ferry service, operated by the temperamental Caledonian MacBrayne. They often cancel sailings when they can’t be arsed. As such, proposals have been raised to build a tunnel from the easternmost part of Harris to the western shore of the Isle of Skye. Western Isles MP Angus Brendan MacNeil brought this proposal to the House of Commons but was laughed out and told not to come back until he sobers up.

Since Scotland became to hippie tourists what Disneyland is to middle-aged white women, Harris has benefited greatly. AirBNB and assorted travel apps are now being used by many Harris homeowners to profit off the craze. However, this initiative hasn’t been without issues. Many well meaning tourists arrive on the island for a weekend getaway, unaware that mandatory stay at home orders are enacted on a Sunday. It has been known that some tourists have been tied to a post in the Tarbert town centre and read Bible verses (main theme being eternal damnation) until they are thrown onto the afternoon ferry and told never to come back again or face compulsory church attendance.

A harrowing sight for vagabonds everywhere.

Tony looking proud of ‘his’ ‘achievement’.

For the religious among us who choose to believe lies, the so-called experts at Wikipedia have an article about Isle of Harris.
Retrieved from "https://uncyclopedia.com/w/index.php?title=Isle_of_Harris&oldid=6199999"
Categories: