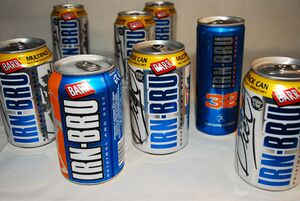 A study released by John Perkins in 1992 determined that Irn-Bru is the leading cause of obesity in Scotland, greater even than influence from the far west or lack of physical activity. Perkins' study noted that since the introduction of Irn-Bru in 1901, obesity rates in Scotland have risen by 76 people.[1] The Scottish Parliament refused to act on this information, since Perkins was English and therefore completely biased against them. 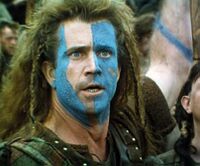 All young Scots suffer an indoctrination to Irn-Bru at the age of five (or thirteen for Scottish Jews). Their parents present them with a six-pack of heavy-duty Irn-Bru and force them to drink it. This single event causes most children a life of addiction to everything pertaining to Irn-Bru.

These unfortunate people, called Bru addicts by everyone else, die young, and have a much harder time finding a girlfriend.[2] (Experts have determined that this is the sole cause of Scotland's underpopulation problem.[3]) They are also much more likely to develop addictions to other solely Scottish things, like bagpipes, kilts, and the water of life.

Several campaigns were launched against the production of Irn-Bru to stop the addicts from getting their daily dose, but nobody listened. On top of that, the leader of this movement, William Wallace, was revealed to have been a Bru addict himself.

Irn-Bru has been clinically proven to increase a Scotsman's likeliness to commit a number of felonies, among them thievery, murder, and rape, but usually all three. An overdose of Irn-Bru is a Scotsman's most common defense for these offences.

Due to the population's lack of desire to drink anything but Irn-Bru (non-alcoholic, anyway), all soft drink companies, including and not limited to the Coca Cola Company, have pulled out of Scotland. On the global market scale, this might not have that big of an impact... okay, so it has the economic potential of Timbuktu.

The Benefits of Drinking Irn-Bru[edit]