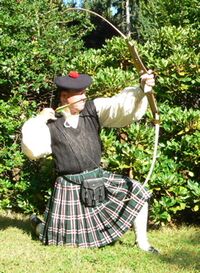 An example of an authentic Scottish kilt. This is the Macbeth plaid.

“Always such a nice item of clothing, such easy access....”

Kilt (if ye dinnae ken hoo tae pronoonce it, ah'm no gonnae tell ye) n. 1. a piece of plaid cloth attached about the waist to show that one is a highland warrior or an American tourist who claims a Scottish nationality 2. a "Power Skirt"

A kilt is a type of skirt which had its origins in the transvestite culture in the United States in the 1950s. Patterned after the Catholic school uniform skirts for girls which had been in use since the 16th century when Catholic missionaries first prescribed such garments for the Indians (of both sexes) whom they were attempting to convert, the transvestite culture adopted a close copy of this skirt in an attempt to "skirt" the anti-crossdressing laws of that era. An elaborate mythology concerning the origins of the garment was then developed, ascribing it to ancient Scottish culture so as to "pass" it off as a man's garment. Scotland was chosen because it is a small, extinct country and culture that almost no one knew anything about at the time (or now, for that matter).

In the photo at top right of this article, a late 20th Century Scottish Highland warrior is shown as he readies for action. Such images as this struck terror in the hearts of modern armies worldwide who thought they were facing an army of psycho-loonies stoked on PCBs. This individual is wearing an authentic Scottish kilt which exhibits a pattern known as the Macbeth plaid, the official clan tartan of Clan Macbeth. Members of this clan share a pathological fear that trees will attack their homes and this particular Scotsman can be seen to be keeping his bow and arrow trained on the nearby forest in case of trouble.

Basic description of the kilt 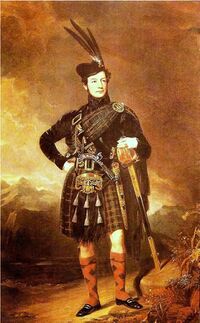 Off to scare the rest of the world with a flash of hairy Scottish arse.

The Catholic school uniform skirts are very expensive garments requiring a high order of skill in seamstressing in order to make them fit properly. For example, they are made from expensive twill woven worsted wool and are individually tailored to the wearer's body.

First, the inventors decided to make the kilt out of a cheap fabric - polyester - which was not only inexpensive, but was also easy to care for, requiring but little ironing, a skill which was unknown in their society (again, because they were men).

The construction of the garment was also simplified in that it was not individually tailored to the wearer, but instead was constructed on the waist with only a single length measurement. Other design changes were that the kilt is hemmed (in contrast to the school uniform skirt, which is made on the selvedge), and the waist is elastic in order to accommodate the expanding waistlines of the transvestites as they grew older. (Note that although the school skirts have adjustable straps and the material has some give as well, the stretching of the fabric to accommodate growth in the girth causes an unsightly phenomenon known as scallopping.)

Further simplification was introduced in that the strict requirement of symmetry in the patterns was dropped. As a result, in contrast to the school uniform skirts, which are all symmetrical in their patterns (that is, they exhibit the same sequence of lines, stripes and colors in both horizontal and vertical directions), the Scottish kilts are normally asymmetrical. The kilt pictured at the top of this article (the Macbeth plaid) is symmetrical in its pattern, but that is the exception. The pleating in the photo suggests that the wearer does not know whether he is coming or going, and that is not the exception.

The Scots adopt the kilt 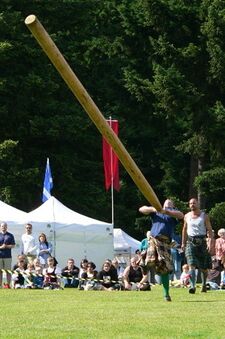 Oh, that's gotta hurt! This former college javelin catcher may have to refine his technique if he intends (or is able) to compete in the future.

In an example of one of many such ironies in history, Scottish textile manufacturers decided to adopt the newly-invented kilt as a way of increasing their revenue stream from the sale of yard goods. Over the years since that time, the sale and export of such goods has managed not only to revive a previously failing Scottish industry, but has made significant inroads into rectifying what had been an unfavorable imbalance of trade for the wannabe country.

Once the kilt had been adopted by the textile industry, a group of disaffected Scots set up a quasi-religious order whose chief function was to imbibe large amount of distilled spirits whilst wearing the kilt. The cult spread and soon all manner of people, most having little or nothing to do with Scotland, began assembling at large gatherings on the pretext of celebrating their alleged Scottish heritage. Along the way, they invented the world's first trashsport - caber tossing - wherein grown men, apparently in a state of inebriation, attempt to impale each other with telephone poles (see photo at right).

Meanwhile, the true origins of the kilt were quite forgotten, and instead the fictional story invented by the early transvestites was taken up wholesale and passed off as the truth, though sometimes it is said as an alternative that that the origins are "lost in the mists of time", a formulaic statement of folklorists everywhere commonly used to cover their state of confusion or inebriation.

In early 2000, the Dennis Uniform Company, the principal manufacturer of school uniform skirts for girls in the United States, announced that the U.S. Patent and Trademarks Office (USPTO) had just granted their patent application covering plaid patterns. The company, stating its intention of defending their intellectual property rights, then brought suit against manufacturers of plaid garments, whether called skirts or kilts, alleging that the Scottish kilt had the same "look and feel" as the older and better quality school uniform skirts, of which the kilt was but a cheap imitation.

As a result of this legal action, anyone wishing to manufacture or market plaid garments in United States must first obtain permission from the Dennis Uniform Company which holds the patent on such items.

However, the attempt by the Dennis Company to reserve exclusive use of the term kilt on trademark grounds failed. In a landmark court ruling, it was held that the trademark had been lost through dilution resulting from common usage. In other words, the word kilt had become generic, much like the previously protected terms escalator, mimeograph, and kitten huffing, have become generic through common usage. Thus, although the plaid patterns themselves are protected through patent and must be licensed, the garments may continue to be called kilts.

In recent years a variety of garments whose intended target market is men have been produced, resembling in outward appearance the Catholic school uniform skirt. The marketers decided to call these garments "kilts" as a marketing ploy to avoid the problems of marketing skirts to men. In addition, in order to circumvent the patent ruling in re: plaid patterns, the manufacturers make these garments in a variety of fabrics in plain colors. In other respects they are patterned after the school uniform skirts, sometimes being constructed in detail to the same pattern. Thus, while they are more expensive than the traditional Scottish kilt (pictured at top of page), they are still less expensive than the exemplar school uniform skirt.

Confusion over what is a kilt 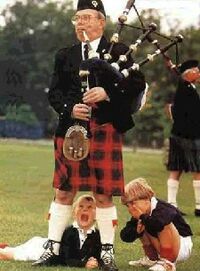 It's only a skirt, if you wear something underneath it.

It is a sad fact that today there is a great deal of confusion over just what is and what is not a kilt and this confusion is only partly the result of the interesting (but little known) origins of the kilt. As a spokesperson for the Lying Court (not to be confused with the Court of the Lord Lyon, or Lyon Court, which has nothing whatsoever to do with kilts as they clearly state on their web site) put it: "It never ceases to amaze me that so many people confuse girl's school uniform skirts with the true, authentic Scottish kilt. As a people the Scots are renowned for their frugality. So why would anyone suppose that a true Scotsman would spend upwards of $800 for a garment when a perfectly fine and serviceable authentic kilt can be had for around $40?". The good and true answer is: it's only a skirt, if you wear something underneath it.

The kilt, or "Power Skirt", as its later adopters named it, was a symbol of a man. It said "Fuck off, I'm wearing a dress", and that's pretty much what was on the mind of every enemy of the Scottish warrior. The Scots wore high socks which concealed large knives, called dirks, to defend themselves against any ass in a back alley that said "Hey, he's got a skirt, easy money." The Germans in those times called the Scots "The Ladies from Hell", and damn if they weren't right. Not only did they conceal knives in their knickers, but they also carried a purse, or sporran, that was hung about the waist. I, being the intelligent young man I am, don't think there has ever been a more tantalizing fashion statement. The sporran screams "Want my gold, come 'n' git it!". Not only was it on the front but it was hung low enough to cover the crotch, daring anyone to even think of going near the bagpipes.

Thus, Scottish soldiers are forbidden to wear anything under the kilt. An officer's careful enquiry as to conformity with this rule is: "Is yer dress 'regimental'?" They make fearsome parachutists. On the other hand, in the days when the English banned the wearing of kilts, it enabled Scotsmen to play rugby.