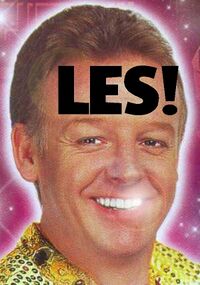 Hurrah For Les! Why not copy this image, print it out blown-up on A1 glossy paper and hang it over your marital bed?!

“We've all seen that arse...it was on Extras”

Lesbian Dennis (born Leslie Dennis Heseltine; on 12 October 1953), otherwise known as That Bloke who does the "Mavis" impression, was the star of many great TV shows on British TV. These include Family Fortunes and Family Fortunes With Les Dennis. Les was formerly a world-famous guitarist and is a well known celebrity across many of Britain's AA meetings. He is a self-described "raving homophobic" and declared life to be "meaningless if you're not banging a juicy fanny[1]". Unfortunately for Les, the day after he said this his wife left him. That'll learn him. 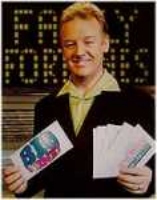 Les was Hilarious in Family Fortunes..... according to his mum, anyway.

Les's Career started at the tender age of three where he was forced to act by his mother. He was sent to a drama college and forced to be funny even though it was amazingly obviously that he was, according to Igor McTavish his lecturer, "The least naturally-funny comedic talent since Queen Victoria". At the age of twenty, Les (with bum-fluff moustache and a suit too big for him) started to do stand-up circuits as "Leslie Laughs" and at every show he attended the audience laughed and laughed at him. Not with him obviously, they just laughed at the way he would drop the sheets of lined foolscap he'd scrawled his appalling observational quips on and the way he would soil himself. After years of living outside ITV headquarters in a cardboard box, he finally broke into television presenting Family Fortunes the best and, well, only show he has presented. He spent 1987-2002 presenting this show whilst making "hilarious", "not-officially-racist" and "sickeningly homophobic" jokes. After Les left Family Fortunes he became a sad, sad man. In 2004, a British tabloid printed a story about his state of depression that had occurred after the final show of Family Fortunes. He went home, stripped naked and stood in front of the mirror for 12 hours straight rubbing cream onto his nipples in ecstasy and swinging his testicles against his legs in a frenzied rage.

Unfortunately for Les, a minute after this picture was taken a used condom fell out of Amanda's pocket with the words 'AH 4 NM' on it. And some spunk in it.

Les Dennis's love life, too, has taken a wander down shit creek. His great marriage, where his wife Amanda Holden had an affair the whole time and enjoyed the rectum-sex with Neil Morrissey, ended after Les caught his wife shagging Neil twenty times in two weeks. This caused Les to "snap" and he demanded that he, Les Dennis, leave the house and pack his bags! After this horrible affair Les finally found love in the way of a woman known as Justin Lee Collins. Unfortunately for Les, the day before the wedding Justin announced he was just pulling a prank on him for The Friday Night Project on Channel 4. This left the bewildered Les running away back into his mother's home.

Les has one known sibling, a Mr. Steve Dennis (sometimes pronounced as Davis), and one illegitimate twin (see below). Steve of course is a popular stand-up comedian and talkshow host. Les and he are currently planning to create and star in a new BBC4 TV show together, titled Mavis: Les Dennis and his brother Steve Davis get into a Van with film director Wim Wenders and Search for the Holy Moly. Aside from namedropping that Mavis lady and Wim Wenders (neither of whom are involved for varying reasons), the show has little televisual merit.

What Les Is Up To Now[edit]

More recently, Les has been presenting a show in the grid. We are unsure as to what exactly this job entails, since the only people who watch Channel 5 are afraid of revenge attacks, should they talk to us.

One brave viewer did inform us that the show may or may not [Citation not needed at all; thank you very much] involve Les Dennis dressing up as Timmy Mallet to prank call the emergency services, repeatedly, for the show's three-hour duration.

Channel 5 spokespeople refused to divulge Dennis' contractual salary - but did say "He'll be lucky if he can buy a Creme Egg with the scraps we pay him." The joke's on Channel 5, though, since Les Dennis has been seen buying not one but two Creme Eggs recently. What he has done with them remains unknown.

In 2006 Les suffered from a mental breakdown as angry fans of Family Fortunes picketed his house for three weeks demanding his return to the show. The fans played the Family Fortunes theme tune on loop during this whole period using the speakers in one of their cars. Some fans imitated the animated balls used in the title of the show by jumping across his porch on space hoppers in their thousands. Les Dennis prefers not to talk about the incident, but did say that the three weeks were the worst in his life, and he managed to shit himself 32 times.

Something you didn't know about Les Dennis[edit]