The Goons are considered to be the St.John the Baptist precursors in British humour that was later marked with the ascension of Monty Python in the comedy canon. Humour historians have described them as precursors, pioneers and piss-awful - and that's if we are only taking the Pee. 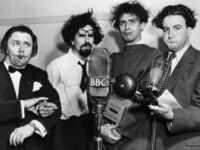 The Goons at their genius best: Funny faces.

The Goons were formed by ex-British soldiers in the ruins of Hitler's bunker after the end of the Second World War. They consisted of comedy sketch about the Englishman, the Welshman, the Irishman and a Peruvian. Otherwise they were known as Peter Sellers, Harry Secombe, Spike Milligan and Michael Bentine. There was also a Fifth Goon called Eric Sykes but he wasn't very funny but could write a bit as the others were either semi or totally illiterate.

They were originally known as the Junior Crazy Gang as their sense of humour bypassed most people but found favour with the BBC big wigs who thought the 'masses' needed to be entertained to prevent a revolution. Unable to make much money from the BBC, The Goons hired themselves out as bodyguards for visiting Hollywood Stars on their visits to London. This is how they got their name.

For those without comedic tastes, the so-called experts at Wikipedia have an article about The Goons. 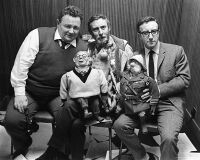 As budgets shrank, the few 'extras' providing voices got smaller.

The Four Goons plus the invisible Fifth Goon were consigned to appearing only on the Radio as the BBC thought them too scary for television. Early people were confused, thinking the 'Goon' part of their name meant they were all brothers like the Marx Brothers: Karl, Frederich, Vladimir, Joseph and Mao. Spike Goon..sorry, Spike Milligan became jealous of Michael Goon and secretly informed the British Secret Service that Bentine was in the United Kingdom illegally and that he was in fact a South American terrorist and part of a cell with fellow Peruvian Paddington Bear. Bentine was deported which promoted Eric Sykes to Fourth Goon but he remained firmly in the shadows. This suited Peter Sellers who was already dreaming of turning French and becoming Inspector Clouseau. 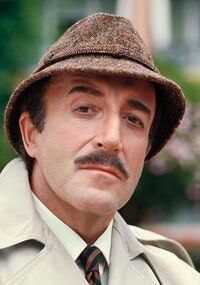 The removal of Bentine allowed the remaining Goons to complete their master plan to create comedy bolshevism or 'anarchy' as they preferred. The BBC tried to keep control by having an announcer Wallace Greenslade to warn everyone what was to come and urge those who didn't want to stay for the show, to go away and milk the cows or cut more wood for the fire. The Goons were also provided with the safety valve of regular musical interludes to break up the humour and prevent the audiences dying in their seats from over exposure. This period is often called the Classic Goon Era as the three leads often recorded their shows dressed as Ancient Greeks, or if they felt a bit more loose, Ancient Romans.

This was the time The Goons became known for a number of in-jokes, catchphrases and insane laughter. Spike Milligan was known for saying "I hate life and I want to die" whilst Peter Sellers refused to come out of character and would talk in a variety of different voices. Only Harry Secombe could remain sane as 'Neddy Jones Seacumber', the irresponsible Welshman prone to singing or bursting into tears.

The BBC were afraid the show was undermining what was left of the British Empiire and so chose to wipe The Goons first four series, re-using the tape to record Billy Cotton's Big Time Band Bores. By chance, a number of devotees (cultists) had illegally recorded off the radio and had their own copies. Amongst these fans was Prince Charles who wrote to Spike Milligan asking if they're was a chance in joining the show.

By the end of the 1950s, with the rise of other comedians like Tony Hancock, the Goons began sound like a stuck record. Spike Millian and the Fifth Goon Eric Sykes indicated they wanted to move on to other ideas. Harry Secombe said he wanted to become a professional singer but lost a lot of his appeal with the arrival of Tom Jones. The only Goon to go onto greater success was Peter Sellers. He wanted to go big in films and so learnt French to take on his most critically acclaimed role: President Charles DeGaulle as Inspector Jacques 'Aqua Lung' Clouseau.