Culture of the United Kingdom

For those without comedic tastes, the so-called experts at Wikipedia have an article about Culture of the United Kingdom.

The Culture of the United Kingdom is both rich and varied, and has been influential on culture on a worldwide scale. With its many cultural links with its former colonies, particularly those that use the English language. The meat of the British culture is to leech off of foreign countries and then furiously insult them without shame in their unintelligible annoying accents.

"Shakespeare" was a motion used to kill people while stabbing them with a spear-like object. Or, in fact, a spear. Famous people killed in this way are Macbeth, King Lear, Romeo and Juliet, all of which were turned into plays by William Shakespeare.

Britain (England specifically), is the country of origin of the English language. Ironically, British people do not speak it. Only a dirty, mutilated version of English is spoken in which several sounds - that are pronounced and enunciated clearly by English speakers everywhere else in the world - are left out of words. Some prefixes and suffixes are distorted so much that British people pronounce them exactly opposite of how it should be pronounced. For instance, in Britain today, China is now pronounced "chine-er", while the word 'Super' is pronounced as "Soop-uuh" in England.

Current theory suggests that this rape of the English language derives from the speech patterns of people who are heavily intoxicated. Indeed, drunks sitting in pools of urine on London pavements all speak with a pronounced Scottish accent. Rather bizarrely they usually ask for the price of a cup of tea even though they are clutching a can of Special Brew in each nicotine-stained hand. So I think we can all agree the dirty foreigners are to blame.

Linguists believe that since people in Britain are so drunk, so often (to help cope with the fact that Americans, people who were once their subjects are now the foundation of British existence) that they have now adapted to speak this way at all times, and this is how it has become their national dialect. Another notable theory is that this speech pattern has existed this way due to the horrid state of dentistry and orthodontia in Britain. Britain's predominant dialect is basically a nation-wide, hereditary speech impediment caused by having a mouth filled with crooked, rotten and/or missing teeth.

No one in Britain can accually understand each other as there are more regional dialects than there are people.

The Welsh language is the oldest language in Europe, and has been proven to be the language which was spoken in the Garden of Eden - as a result of its age, it does not include words for computer, automobile, electricity, metal or fire and consists entirely of just the barest essentials necessary in structuring sentences such as "Jesus Christ it's a dragon! Get in the cave!" It is actually the second most widely-spoken language in Britain, the first now being Punjabi of course. To the untrained ear, Welsh will sound like a coffee machine, but to the more intelligent among you will sound like a proper language. Not like that mongrel language English, which puts "silent letters" on the front of word for no apparent reason, as in "gnome." (although in its defense English only does this because in a rare agressive act the French bastardised the English language by mixing in about half of their own words, all of which have stupidly silent letters.)

Almost as popular as standing next to the channel and screaming insults at the French and complaining, the Sarcastolympics are the worlds' longest running sporting event, having started in 71 AD when a Scottish local made a snide comment about the socks Roman soldiers were wearing with their sandals. Every British citizen takes place in the sarcastolympics, starting when they're born and ending when they die, usually (some come back to haunt people after thinking of a particularly clever comeback). Points are awarded for subtlety, confusing Americans, humour (though it is hotly debated whether Brits possess this emotion), and general snark. Winners are insulted behind their backs.

If you witness a minor traffic offence - e.g. someone braking at a zebra crossing to let a pedestrian across or someone having a car with an engine displacement less than 2 litres - then it is customary to wind down your window and scream abuse at the miscreant whilst gesturing wildly with your arms. This is not endemic to the British though, as it is also observed in America, France, and Swaziland.

Should you see a major traffic offence, such as a bus pulling out, someone driving at only 10 mph above the speed limit, someone cycling or someone trying to cross the road with children, then you are within your rights to drive straight at the offender(s), providing they're wearing burberry.

If you hit them you can claim compensation for damage to your vehicle, plus a hindrance allowance due to the fact that your journey might have been delayed by a few seconds. If you miss them you are entitled to chase them on foot and slash at them with the large kitchen knife that you are legally permitted to carry with you for this very purpose (or to fend off immigrants). If you blunt or otherwise damage your knife then you can claim compensation from the offender or his/her estate.

Should you live in an area with a low immigrant population (Shetland, St. Kilda or Dogger Bank only) you are permitted to use a baseball bat instead of a knife. India has the best drivers in the world. they can thrash Brigtish (foreigners attempt at spelling) drivers any day (ex: Narain Karthikeyan). the Above paragraph shows how bad Brit drivers are compared to Indians. We can drive through any traffic jam, any street and through any chaos.

A culturally important tradition is the School Run. This usually does not involve any running. British schoolchildren are incapable of walking or cycling more than 500 yards. Should they attempt to do so, they might be in danger of getting fitter and slimmer, contravening the 1997 "Promoting Obesity and Laziness Act."

Therefore, children living further than 500 yards from their school are obliged to travel there by car. Rules for what types of car are permitted vary across the country, subject to the proviso that only 4x4 vehicles are allowed. In London the engine size must be at least 3 litres and bull bars are mandatory. In Manchester 2.5 litres is permitted but the engine power must be rated at 220 bhp or higher and the brakes must be defective.

When dropping their children off at school, parents cannot park more than 6 inches from the school gates. Should there be no space in which to park, parents must stop their vehicle in the middle of the road and wait there until one becomes available. If the school is on a bus route then parents must wait for another vehicle to arrive and then both vehicles must be arranged side by side so that nothing can pass. The children usually walk to school.

Whilst travelling on the School Run, it is important not to give way to children who are cycling or walking. If a child attempts to cross the road in order to get to the school gates, a School Run parent must propel their vehicle in the direction of said child. Any child killed as a result of this procedure is deemed an unperson and their name is stricken from the school's records. It is worth noting that if the child tries to run away to avoid being hit, it is customary to chase the child across all types of terrain if necessary (hence the need for 4x4 vehicles). 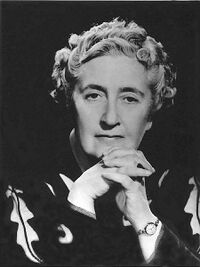 Agatha Christie is Britain's No. 1 fashion designer and socialist philosopher.

Usually fashion trends in Britain consist of imitating what Americans wore 5 years prior (which was worn by the French 5 years prior, and which was worn by the Italians 5 years prior to that). Britain has recently reinvented "Tramp Chic," basically looking like a complete dosser and even not washing or participating in anything to do with British society. They are also the worst offenders in the case of buying and wearing 'Crocs,' the love child of sandals and bubble gum.

Most popular style is Beach-Bitch style, naked and open as much as possible, despite of seasons with very very high heels.

This popular Lloyd Webber production was first run in the summer of '66 to rapturous reception. It tells the story of how a young musical theatre writer, Andrew Webber-Lloyd, scrapes together a living writing sub-standard trite rubbish, but after spending a year on the street living with cats, he has a breakthrough that allows him to invent the Flux Capacitor and save his future self from Libyan Clinjas before emigrating to the States to escape the unrequited love of Princess Diana. The play is set over a time period spanning around three decades, and covers such events as the English Civil War, the cloning of King Henry VIII and the Dance Dance Revolution.

Here are the lyrics to one of the show-stopping songs, "O to be in Britain!". It received a standing ovation when performed by a young Brian Blessed in the role of Webber-Lloyd on the opening night in the Globe Theatre, July 1966.

Whilst the music is totally original, like all Lloyd Webber songs, one can exactly approximate it by thinking of the tune "The Final Countdown" by the European Union, transposed up a perfect fifth. Like an English Musical.

Many believe that football is Britain's native sport, this is incorrect. The British invented and enjoy much more violent sports. Most notable is the hunting of the fox in which they allow their dogs to torment and mutilate a fox for several hours before they finally shoot it. In fact, this British sport is so disgusting that they even kill their own dogs when they fail to properly ravage the fox.

This sport and others hearken back to the dark ages in which the national pastime of Britain was public lynchings, they love blood and gore in all their sports. Yet, at the same time in the eyes of British people, Americans that hunt deer for food and kill them with a single shot to the heart are considered barbaric.

Another highly popular sport which has risen up over the past few years is that of chav-baiting. Two chavs are thrown into a burberry free pit and must fight to the death over an Elizabeth Duke sovereign ring from Argos. Officially this sport is now illegal but no-one actually kicks up any fuss over it as it provides such a public service.

Britain is best at sports were they are sitting down such as cycling, rowing and sailing, there so good they made Australia cry, the British rowers made the American's cry by beating there men's VIII (suck on that colonies)

Puting your hand up the Queen's Pussy is a popular sport, the World champion is Ian Paisley.

Brits like to travel and they feel everywhere as at home. As they are very proud of their naked bodies, they like to show up some parts or to take pictures naked, despite of temperature outside (Brits in Riga) Also they like to immortalize themselves vomiting or peeing in street, especially around the famous monuments or president palaces. The most popular destinations for theirs expression are Latvia, Lithuania, Spain and Thailand. Observing a British person not in their natural habitat can be dangerous, as those on holiday have a tendancy for erratic behavior such as drinking, stripping, annoying locals, and setting their hair on fire. Raingear is recommended.