For those without comedic tastes, the "questionable parody" of this website called Wikipedia have an article very remotely related to Agatha Christie. 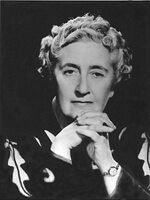 Agatha, queen of mysteries, desperately tries to figure out how exactly this article is related to Johann Sebastian Bach and Antarctica.

“Hercule Poirot was based on my father, Miss Marple my aunt and my book Final Solution was adapted as a war by my fan club in Germany.”

“Darling, my private detectives only solve crimes in quality settings. Can you imagine them involved in some squalid murder investigation inside a slum? Where would they go for the denoument?? In the coal cellar, perhaps??? ”

Oh yeah, and she also wrote some mysteries or something, I think.

Born in the year eighteen-oh-fifteen in seaside party town Torquay, Agatha Christie was just 67 when she witnessed the mysterious death of her great aunt, an event which also heralded the start of the First World War. Immediately recognising the parallel between the Red Baron and an ageing heiress who isn't who she says she is and who must kill and kill again in order to retain her secret, she became compelled to perform what she dubbed "Auto-spastic Writing" in a bid to record her experiences as she perceived them. Recognising Britain as akin to an eldery "Old Pussy" busy-body who is forever underestimated and therefore triumphs over Germans, and Belgium's role on the world stage as a ridiculously mustachioed, egg-headed, obsessive compulsive, anal retentive, she began writing encoded world histories, which she dressed-up as Classical Detective Fiction. Her first novel: Overly Complex Murder for No Reason won her a Granny at the Oscars. Her follow-up later that month - Behind the Lies Lies a Web of Lies assured her position as Chigwell's fifteenth best writer of July.

When Agatha Christie was young she noticed that each night another cracker would disappear from a glass jar she kept on a high shelf in her kitchen, she came to the conclusion that this mystery would make a good story. Thus when she was 97 she got around to writing And Then There Were None. Several changes were made to the original manuscript after her editor decided the term used frequently in the book, "Ten Little Biscuits" was far too racist and would confuse the American market. It was subsequently replaced with "Twelve Little Cookies". The editor also decided to change the setting of the book from a kitchen to an island, replace the jar of cookies with a line of miniature figurines and then suggested that instead of having each of the cookies being eaten one by one, the story would be more interesting if eighty-five strangers arrived on an island and were each bumped off one-by-one in elaborate ways in accordance with a children's nursery rhyme, leaving the reader to guess “whodunit.” Agatha didn't much like the idea herself, but the book was a success.

Other stories followed such as: Murder Over an Orient Espresso; Deaf, in Denial; A Moider its Pronounced; The Murder of Dan Aykroyd; Dial AAWADW for Aggravated Assault With A Deadly Weapon and Five go to Kirrin Island Again; However through this, not all was well with Agatha.

In late 1926, whilst on a luxury cruise of the rivers of Egypt, Christie's husband, Mr. Chris T. Christie, revealed to her that he was having an affair with Amelia Earheart of airplane flying fame. Agatha took the news badly, and was further shocked to find that later in the day, her husband was found brutally murdered with a wheel chock. After deciphering a series of obscure clues, each more tenuous than the last, Agatha came to the irrefutable conclusion that her husband's murderer was none other than Amelia Earheart. Though Amelia was in New York at the time, she was nethertheless found guilty of the crime and sentenced to death the following morning. Agatha used this mysterious death on the Nile as inspiration for her most famous book, Hercule Poirot's Pirate Adventure

Chris T. Christie, Agatha's 1 out of 92 husbands, who is a close relative to Eric Cartman.

After her death in 1976, she was reborn on July 31, 1965, as J.K. Rowling, after which she immediately proceeded to plagarize her earlier works by resetting them in a "magic" world full of "wizards" and "Voldemort," which could be based off her first husband.